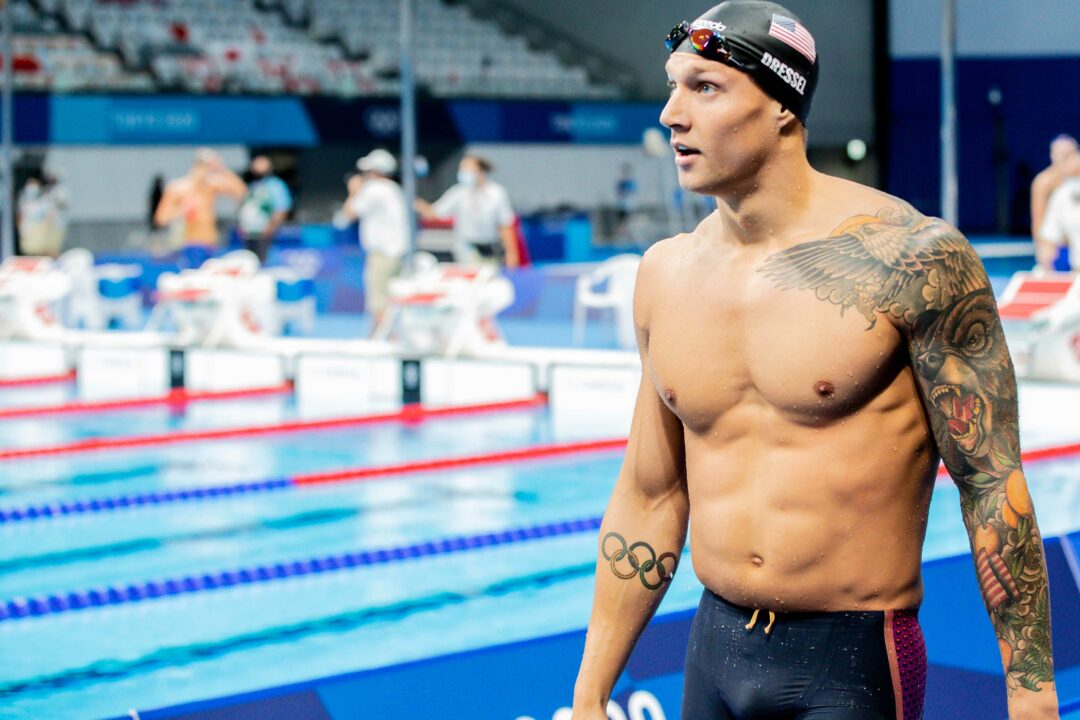 In People‘s feature on Dressel the two-time Olympian opens up about the pressure he put on himself in the lead-up to the Tokyo Olympic Games as well as his outlook now that the Games are (finally) past. Like every athlete who competed in Tokyo, Dressel had to endure the one-year delay of the Games brought on by the COVID-19 pandemic.

Dressel makes a point to address the role that his mental health plays in his ability to compete at the highest level of the sport, as well as how important it will be for him to prioritize his mental health in the years ahead. Dressel, who is 25-years-old, does not want his career to end early. In fact, Dressel states that he hopes to still be wearing a Speedo at the age of 60–whether that means Dressel will someday rewrite the Masters Swimming record books or simply swim laps as a means to stay fit, he does not say. Swimming, of course, is just one part of Dressel’s life, and states that he hopes to continue learning how to be a better husband, son, brother, and dog owner as he gets older.

Dressel also reveals that he was once insecure about being a swimmer and wearing a Speedo since swimming was not as “cool” as the sports his peers did.

“I had the glasses, I wasn’t in a cool sport, I was super skinny, lanky, so, of course, that’s the perfect concoction for being a pretty big weirdo about yourself,” states Dressel.

Some more quotes from the People Magazine interview are included below.

“That’s the biggest goal after coming back from Tokyo: being able to breathe,” says Dressel. “I think I overdid it, to be honest. I got great results, but I think it was to a fault. Because I drove myself crazy and I don’t think that’s fair to myself. I don’t want to end up leaving the sport early or hating it because I didn’t give myself time to respect the water and I feel like the water has always respected me. I would like to prioritize myself a little bit more instead of swimming.”

Regarding his long-term outlook on swimming and life in general, Dressel says:

One quote I’ll never forget at national select camp was “you are not a swimmer, you are a person who swims.” Seems to be what Dressel is going through

So will he compete in ISL playoff at all? Sounds like he need more time off.

If you were facing getting your ass handed to you by Chalmers, you’d probably skip it too.

Or he just doesn’t give a s*** about some ISL swimming when he’s too busy keeping all those golds from this summer clean.

I am not keen on the new format! Why the change?

They already changed it back lol

Why is this not with murph? #snubbed

Because your murph can’t swim 17.6 in the 50 free and win it by a full second and make D1 sprinters look pedestrian.

14
-12
Reply
Anonymoose
Reply to  Dressel is a genetic freak

4
-1
Reply
Ledecky will go 3:55 in Paris
Reply to  Dressel is a genetic freak

what is with you and the word pedestrian

Pedestrian is how Ledecky looked compared to Titmus in the 200 free last summer.

Pedestrian is how you look rn