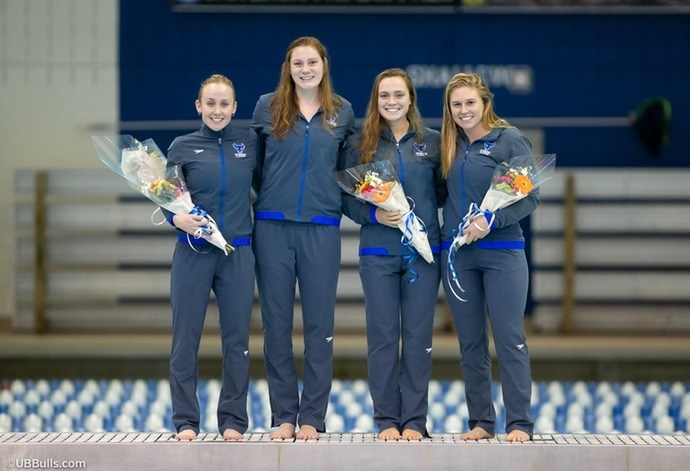 The Buffalo Bulls were dominant on Friday afternoon, claiming individual victories in 13 out of 16 events in the pool on senior day at Alumni Arena Natatorium, topping Bowling Green State 176-117. Current photo via Buffalo Athletics

BUFFALO, NY – The University at Buffalo women’s swimming team (2-4, 1-2 MAC) was dominant in the 176-117 victory over MAC foe Bowling Green (7-5, 1-3 MAC) on an afternoon where the team celebrated the contribution of the programs four seniors inside Alumni Arena Natatorium.

The Bulls were dominant on Friday afternoon, claiming individual victories in 13 out of 16 events in the pool on senior day at Alumni Arena Natatorium.

In the afternoon’s first event, the 200-yard medley relay, the Bulls would swim to victory as the relay team of Nicole Roitenberg, Anna Vitolins, Jillian Lawton and Katelyn Burns touched the wall first with a time of 1:43.68. Buffalo would also claim victory in the only other relay event on the afternoon, the 200-yard freestyle relay with a winning time of 1:37.75, over two seconds ahead of the second placed team from Bowling Green.

In senior day fashion, Buffalo senior Sharne Tiller collected a dominant victory in the 200-yard breaststroke event in her last meet inside Alumni Arena. Tiller touched the wall with a time of 2:21.30, nearly seven seconds ahead of the second placed swimmer.

In the longest event of the afternoon, the 1000-yard freestyle, Buffalo freshman Julia Boswell stepped up in a big way, pacing herself to a victory with a time of 10:21.81, over eight seconds ahead of the next placed swimmer, Kellie House from Bowling Green.

Junior Anna Vitolins also collected a victory on the afternoon, swimming to the win in the 100-yard breaststroke with a time of 1:04.32.

In the sixth event of the day, the 200-yard butterfly event, it was sophomore Nicole Roitenberg who claimed the victory for the Bulls, touching the wall with a time of 2:05.05.

Sophomore Brittney Beetcher continued her good form this season, claiming the win in the 500-yard freestyle event with a time of 4:56.77.

Brittney Beetcher , who was victorious at Eastern Michigan in the 200-yard butterfly, continued her success in the butterfly, as she swam to the win in the 100-yard fly, touching the wall with a time of 56.49.

In the diving well, freshman diver Jae Sarkis would collect a victory in the 3-meter diving event with a combined total score of 322.20. Sophomore diver Journi Northorp placed third in the event with a score of 278.33. Sarkis also placed well in the 1-meter dive, finishing second with a score of 268.28, just 10 points behind the winning score held by Bowling Green.

The Bulls will now have a few weeks off from dual meet competition as the team begins to train for the MAC Championships slated for February February 27th through March 2nd in Akon, Ohio.

BOWLING GREEN, Ohio – The Bowling Green State University swimming and diving program competed in their fourth MAC meet of the season, coming up short against Buffalo with a final of 176-117. The loss moves the Falcons to a 7-5 record on the season with a 1-3 standing within the conference.

Up Next
The Falcons will conclude their regular season with a two day event in Toledo, taking place on Friday, Feb. 8 and Saturday, Feb. 9. This will be both Bowling Green and Toledo’s last meet prior to the MAC Championships. The Rockets will enter the competition with a 3-5 record, 0-3 within the MAC. This year, Toledo lost to Eastern Michigan, Ohio, and Miami within the conference. Friday’s portion of the meet will begin at 5 p.m., with Saturday starting at 11 a.m.