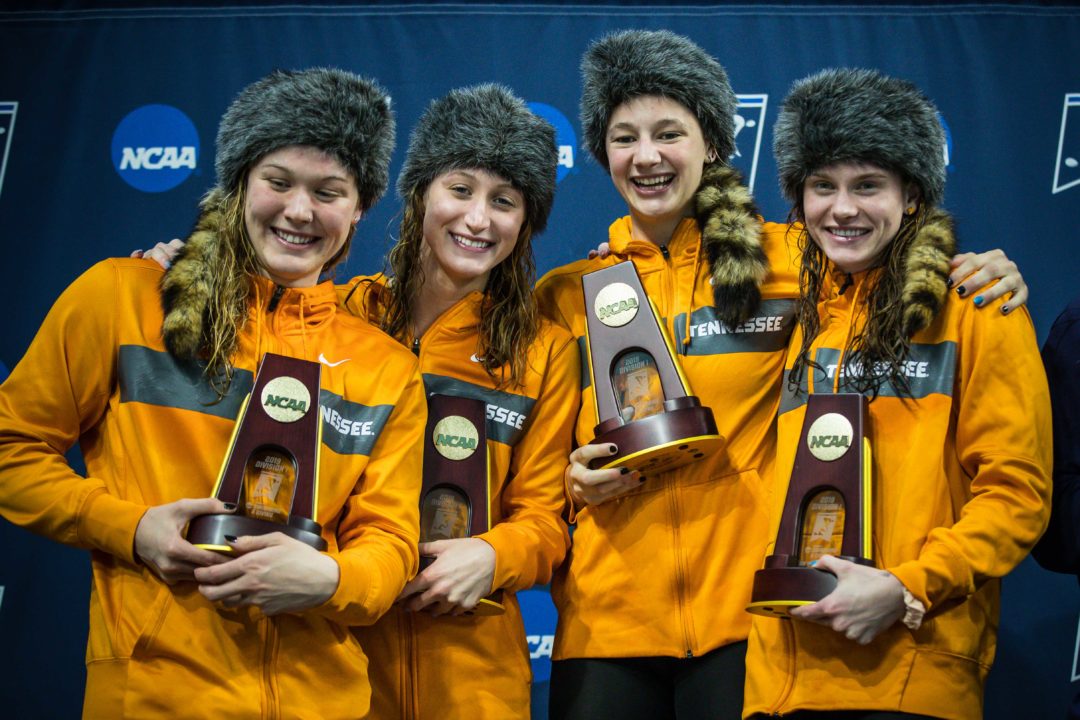 After pulling out of a the tri-meet that was scheduled at Michigan this weekend, the Tennessee Volunteers and Virginia Cavaliers decided to go ahead and still race, but do it in Knoxville instead of Ann Arbor. Even though we ranked both Virginia teams ahead of both Tennesee teams in our initial power rankings, the Volunteers came out on top in both the men’s and women’s competitions.

Ultimately, Tennesee would win on the strength of triples from team stalwarts Brown and Small.

All three of Brown’s individual performances are officially the top times in the NCAA so far this season, while Douglass’ 100 fly time puts her only behind Brown. (Note: Maggie McNeil did go 49.57 in the 100 fly at the Michigan Intrasquad yesterday, but that shouldn’t be considered an official time for NCAA qualifying purposes and shouldn’t up in the NCAA database). Douglass, the top ranked recruit in the girls high school class of 2019, has been on fire so far this season for the Cavaliers, knocking down several personal bests at the UVA Intrasquad and the Trojan Invite.

The Volunteers’ MVP of the meet was sprint freestyler Alec Connolly, who after splitting 19.40 on the medley relay to open the meet, won the 50 free and the 100 free in 19.94/43.55. That 100 free time is the fastest time in the NCAA so far this season. Additionally, Connolly anchored Tennesee’s winning 400 free relay in 43.11.

Matthew Garcia matched Connolly’s  two individual victories as he swept the backstroke events in 48.11 and 1:46.01.

Michael Houlie may have had the next-most impressive swim of the evening after Connolly, though, as his 53.78 victory in the 100 breast puts him 3rd in NCAA Division I so far this season.

KNOXVILLE, Tenn. – The No. 15/16 Tennessee swimming and diving team secured a big win over No. 2/4 Virginia Saturday at the Allan Jones Intercollegiate Aquatic Center, sweeping the men’s and women’s competition.

The Vols defeated the fourth-ranked Virginia men’s team, 166-134, earning their third win over UVA in the last four meetings. The Lady Vols took down the Cavaliers’ second-ranked women’s team, 164.5-135.5.

The Lady Vols were highlighted by several standout performances, including Erika Brown and Meghan Small winning three individual events apiece and helping to lead Tennessee to relay wins as well as setting some of the nation’s fastest times.

In the 50 freestyle, Brown threw down the nation’s best 50 free swim of the season, turning in a 21.96. She carried that momentum into the 100 free where she again vaulted to the top of the national leaderboards with a 48.17, setting an NCAA B-cut time.

“Erika is a student of the sport,” associate head coach Ashley Jahn said. “She doesn’t take anything for granted but uses every opportunity to get better. Her competitive drive, her focus on her Lady Vol team combined with how she utilizes opportunities makes every one of her races really exciting to watch.”

Small joined Brown on the 200 medley relay, swimming leadoff with a monstrous 24.62. She followed that up with the fourth-quickest 100 backstroke in the nation this season at 53.20, an NCAA B-cut. The senior set her second NCAA B-cut of the day in the 200 back at 1:55.06, the country’s eighth-fastest this year.

She rounded out her day with a third NCAA B-cut in the 200 individual medley, touching the wall at 1:58.94, locking down the sixth spot nationally.

In the 200 IM, Tess Cieplucha joined Small in setting an NCAA B-cut time. She stopped the clock at 1:59.27 and in doing so, set the nation’s eighth quickest time.

“Our team competed really well today,” Jahn said. “We had great leadership from all classes and it was a great team effort all around. We were very professional in our preparation, race execution and we were committed to winning. Virginia is a very strong team and we knew they would come in ready to compete. I’m really proud of the team’s effort and poise under pressure.”

On the men’s side, Alec Connolly and Matthew Garcia led the Vols with multiple wins while the team set seven times that place among the top 10 nationally.

“Connolly and Garcia have been so consistent with high level performances but it is the senior class as a whole that has been leading this team,” associate head coach Lance Asti said. “They did a great job leading the team through preparation and had us ready to go against a talented Virginia squad.”

Michael Houlie showed out in winning the 100 breaststroke at 53.78, setting the country’s third-fastest time and earning an NCAA B-cut.

“I am really proud of how these men are continuing to build their competitive identity,” Asti said. “We trained hard this week but didn’t let fatigue define the meet. These guys love racing and that really came through today.”

Grace Cable won her fifth event of the season, scoring a 323.40 on her 3-meter dive. Likewise, Will Hallam took his fifth event win of the year on the 1-meter board with a score of 335.93.

“This was another solid outing with continued consistent performances from both Will and Grace,” diving coach Dave Parrington said. “It was good to see Will take a risk and put in a brand new big 3.5 degree of difficulty dive on 3-meter. That will pay dividends down the road. In Grace’s case, she missed her second dive on 3-meter but rebounded well to come back for the win.”

Parrington praised Keegan Richardson who set zone scores on both boards, scoring 314.93 on 1-meter and 330.23 on the 3-meter board.

UP NEXT
Tennessee will travel to Louisville on Thursday Oct. 24 for a dual meet against the Louisville Cardinals.

“We had a great meet today against Tennessee,” head coach Todd DeSorbo said. “Obviously, it was tough competition and that’s our goal. We want to compete against teams that are as good, if not better, than us and at certain times of the year some teams are going to be better than us. It was a really good challenge, especially on a last-minute (location) switch. I have to hand it to the team, we fought hard the entire way. We had a lot of energy, a lot of fight and a lot of support for each other, which is always the most important thing. We race as a family, we win as a family, we lose as a family.”

“Tennessee is a well-coached team and always swims well,” DeSorbo said. “We were happy for the challenge and want to thank them for putting this together last minute. The meet ran great and our team enjoyed racing. We are looking forward to being back here next month.

“There were a lot of highlights today. You can’t always control what the other team is doing and how they are preparing throughout the season but I’m definitely happy with how our squad competed today. We had a lot of wins for the women and a lot of wins for the men. Paige Madden is definitely a mainstay with winning events, and she’s a tough one to beat in any distance freestyle. I’m definitely pleased with where we are at. Again, the ultimate goal is what we do in March at NCAAs and just progressing towards that day-by-day. The goal now is to get back to doing more good work, like we have been, and prepare for this coming weekend against Wisconsin, and just try to be better than we were this weekend. Then from there, try to get better each week.”

The Cavaliers will host their home opener on at the Aquatic and Fitness Center beginning on Friday (Oct. 25) as the team welcomes Wisconsin to Charlottesville for a two-day meet.

Big win for Lady Vols and Vols! Lady Vols are getting deeper! If Mosely can swim big this year and Hartley gets close to top form, it will be a fun March.

Pretty sure Maggie McNeil’s times were faster than Brown in 50 free and 100 fly tho. Do they count even though they’re from an intrasquad meet?

MacNiel’s 100 fly shouldn’t count officially, and doesn’t show up in the NCAA rankings, but I’ve added a note in the recap mentioning it. Thanks!

Forgive my ignorance is that bc only competition with another team counts or something to do with officiating/timing standards.

NCAA rules dictate that a meet can only count if it is between two NCAA teams.

I think Erika Brown should consider doing the 200 free over the 100 fly. I just don’t see her getting past MacNeil and Hansson, but the 200 seems pretty wide open with no Comerford Ledecky Manuel Haughey type at the top.