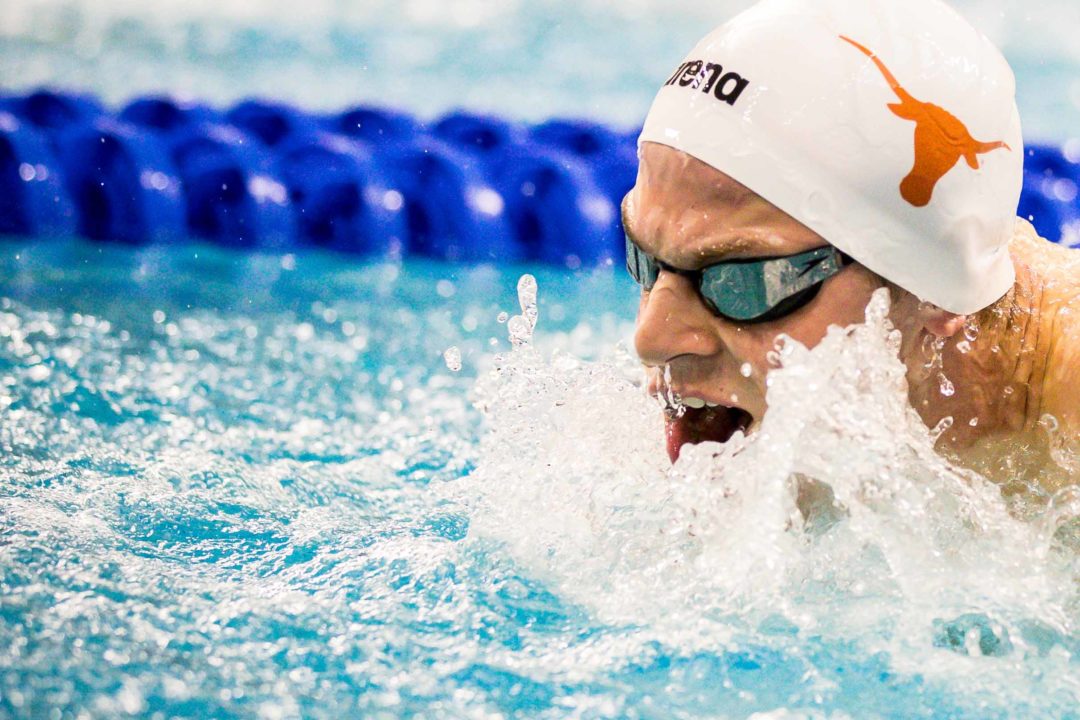 The annual American Short Course Championships got underway today in Austin, Texas. Despite the name, this meet isn’t an American Championships recognized by any national body, but rather typically serves as a combination club meet and a college last-chance meet, hosted by the University of Texas.

While in years past we have seen some big yards swims from club swimmers (including Abbey Weitzeil’s 2016 50 free American Record), this year the emphasis seems to be more the college last chance side.

Arguably the biggest swim of the day actually came this morning, where Longhorn Braden Vines clocked a 1:43.18 in the 200 IM (1:43.56 in finals) that should put him well under the requisite NCAA Invite time. It took a 1:43.79 to qualify last year, and it looks like qualifying times may be a bit slower this year.

Vines swam at NCAAs as a freshman and then had some fast mid-season times last year before NCAAs was canceled, but hasn’t competed much yet this season. He swam his main events (200 breast, 200 IM, and 400 IM) at the long course San Antonio PSS in January, then swam the 100 back and 100 fly at the Texas-TCU dual meet in February, but didn’t appear at Big 12s.

Texas confirmed that Vines is available for NCAAs, although they have not finalized their roster. Vines’ lifetime bests in the 200 IM (1:42.71), 400 IM (3:40.09) and 200 breast (1:52.28) would all score points, and those times would’ve made the A-final at 2019 NCAAs, and if he was able to hit those times at NCAAs next month, that could be a big boost for the Longhorns in what’s shaping up to be yet another close battle with Cal.

It’s a bit of an odd mix of Longhorns competing. There’s a few guys who are already safely qualified, like Chris Staka, who swam the 200 IM this morning, going 1:46.32, then not swimming finals. Sam Pomajevich, who has the 3rd-fastest time in the 200 fly this year, swam the 500 free, going 4:24.47 in prelims and 4;23.37 in finals. Pomajevich popped a 4:12 as a freshman at NCAAs in 2018, and Texas could certainly use another scoring swim from in that event.

There were also a few swimmers from Texas swimmers who should get an NCAA invite but could fall victim to roster limits, although none of them hit any times that would help sure up their chances of an invite or making the roster.

The Incarnate Word Men also swam on Thursday, putting up times that would have won events at the CCSA Championships last month. They were the defending champions but were forced to miss the championships due to ice storms that disrupted Texas for over a week. They made the most of their opportunities today. Their 200 free relay team clocked a 1:20.69, which would have put them ahead of Gardner-Webb’s 1:21.42 that finished first at CCSAs. Incarnate-Word also hit 4:16.56 in the 400 medley relay tonight, which would have put them 2nd at CCSAs.

While there were only a couple of non-college swimmers in attendance, they made their presence known tonight. Texas alum and 2016 Olympian Clark Smith recorded what appears to be his first official swim of the year, winning the 500 free in 4:15.06 after going 4:15.62 in prelims. Smith is the former NCAA and U.S. Open Record holder in the event.

Texas A&M’s Carter Nelson hit a new lifetime best to win the 50 free in 20.02, followed closely by 30 year-old Bryce Bohman. The former West Virginia swimmer is representing Pulling Water, and clocked a 20.06 today, which actually appears to be a new personal best for him. Texas freshman Ava Longi was the only woman to swim today, and she also hit a new lifetime best in the 50 free, improving from 23.14 to 23.07.

Shots fired. It looks like Cal has the lead in the swimulator right.(no diving factored in)

Wonder if cal will do a last chance meet to try to get biondi, Frazier, louser (if he was just in covid exposure protocol or something), etc in

Do you have a list of the remaining last chance meets for men’s NCs?

I think Pomajevich doesn’t even have the B cut in 500Fr this season, maybe that’s what he was going for