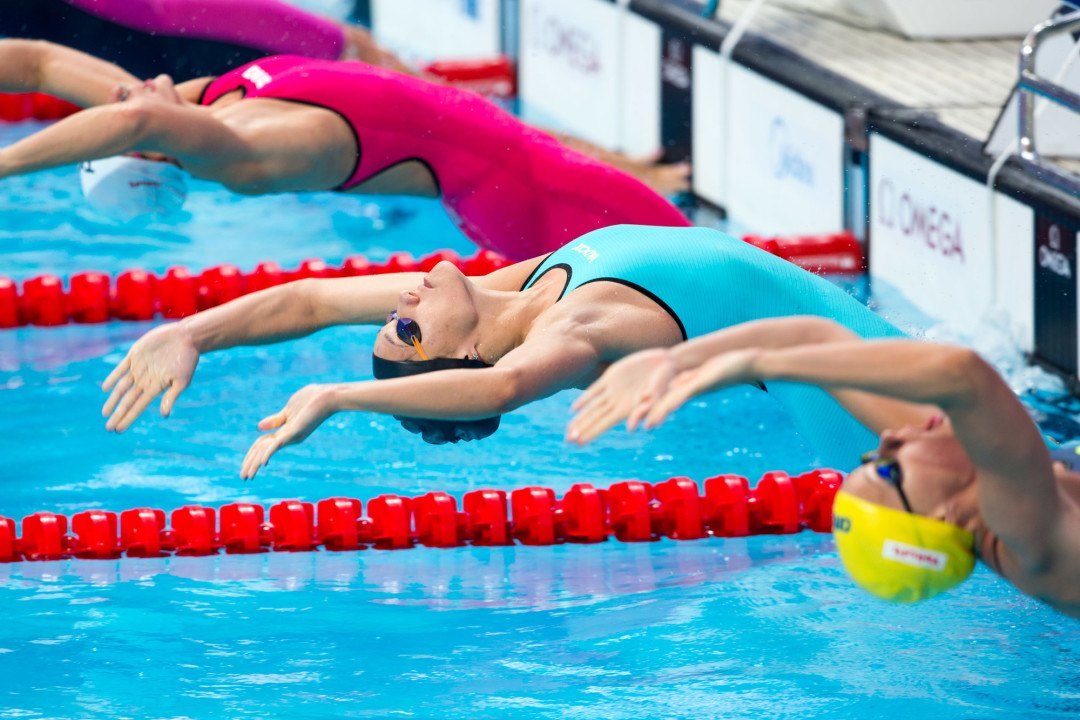 Andrea Berrino of Argentina broke her own 50 backstroke national record by nearly a second at this weekend's South American Championships. Current photo via Tim Binning/TheSwimPictures.com

200 backstroke winner Andrea Berrino swam a new Argentine record in the 50 back with a quick 28.11, taking down her old mark of 28.98 from last year’s Maria Lenk Trophy by nearly a second. Her swim rocketed her to 11th in the world standings. Berrino’s win was an upset over the South American record holder in this event, Etiene Medeiros of Brazil, who finished second with a 15th-in-the-world 28.17.

In that 50 back, Medeiros, however, was probably a little winded, as she had just won the women’s 100 free in 54.83, the only sub-55 women’s swim of the day. Medeiros’s performance was still a far cry from the 54.26 South American record that she rocked back in December at the Brazil Open. Unless two Brazilian swimmers can come in underneath her record at Maria Lenk, she will swim the event this summer in Rio. Fellow Brazilian Manuella Lyrio came up second with 55.07.

Argentina’s Virginia Bardach won the 400 IM in 4:42.62, coming in ahead of the likely Brazilian Olympic representative in the event, Joanna Maranhao, who finished in 4:43.31. Both swimmers came in under the FINA ‘A’ cut of 4:43.36.

The Brazilian team of Maranhao, Jessica Cavalheiro, Bruna Primati, and Lyrio scored a big victory over their opponents in the 800 free relay, swimming 8:04.29 to second-place Peru’s 8:18.85.

Brazil’s Guilherme Guido swam a 25.19 in the 50 back to tie for 12th in the world rankings and win the event. Guido, who set a South American record in the 100 distance at the Brazil Open and won the 100 back earlier this weekend, will very likely represent Brazil in the event this summer.

Argentine Olympian Federico Grabich took the gold in the 100 free with 49.59. However, his prelims performance was significantly faster at 49.34. Venezuela’s Cristian Quintero took second with 49.69, also slower than his prelims swim of 49.50.

World junior record holder Brandonn Almeida of Brazil, who has turned 19 since his historic swim at the Brazil Open in December, took the win in the men’s 400 IM by over five seconds, swimming the event in 4:17.78. Like Medieros in the 100 back, Maranhao in the 400 IM, and Guido in the 100 back, Almeida is unlikely to have two Brazilian swimmers come in ahead of his December swim and under the FINA ‘A’ cut 4:16.71 in this event, so he is likely set to swim in Rio.

The Brazilian team of Giovanny Lima, Leonardo De Deus, Brandonn Almeida, and Luis Melo swam a close race against Venezuela’s Cristian Quintero, Marcos Lavado, Carlos Omaña and Andres Doria in the men’s 800 free relay, but Brazil made it to the wall first. Their 7:24.42 came in just a second ahead of Venezuela’s 7:25.69.