Baker Qualifies for Four A-Finals on Friday at Winter Nationals 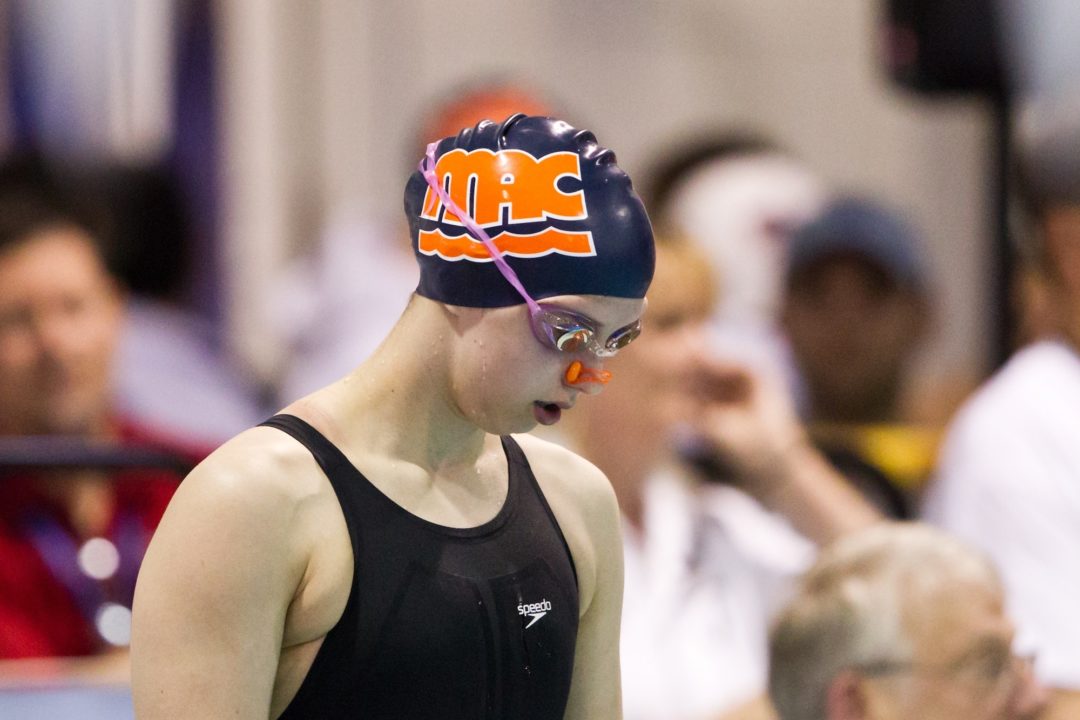 Kathleen Baker was a machine on day 2 of Winter Juniors in Knoxville. (Photo Courtesy: ©Tim Binning/TheSwimPictures.com)

SwimMAC’s Kathleen Baker has set herself up for a tough finals session, as she made the A-finals in the 100 fly, 100 back, and 100 breast individually, plus the 200 medley relay on day 2 at the 2012 Winter Junior National Championships in Knoxville, Tennessee.

Baker is one of the most versatile juniors in the country, which she demonstrated on Thursday night by winning the 200 IM title in a new Meet Record time.

That 100 back final should be a great one amongst some really young stars of American swimming. Michigander Taylor Garcia, only 15 like Baker, is the 2nd seed in 53.90, and the Phoenix Swim Club’s Keaton Blovad, only 14, blew away her best time with a 53.98 for the 3rd seed.

Lurking, among others, is 16-year old Mickayla Hinkle of the St. Croix Swim Club as the 7th seed; she’s coming off of her Minnesota high school championship meet though so we’ll have to see if she can get that low; and PASA’s Ally Howe as the 8th seed. Lakeside’s Asia Seidt had a big time drop to just miss out on the A-Final herself.

In what was purported to be a great 100 breaststroke field, Californian Heidi Poppe so far looked easily the class of the field, taking the top seed in a best time of 1:00.38. That’s the fourth-best time by a 15-16 in history. Lindsey Horejsi, who ranks third on that same list, was 3rd in prelims in 1:02.26.

And finally, 200 IM runner-up Ella Eastin from Southern California cruised to the top seed in the 400 IM in 4:13.58 ahead of the Gator Swim Club’s Hannah Burns in 4:15.34. Both swimmers are 15, though Eastin seemed to save a little bit more of her energy on the back-half of this race after going out in a very hard first 200 yards.

On the men’s side, the developing story of this meet continues to be Davie Nadadores 16-year old Dylan Carter, who is swimming his first ever taper meet in yards. He topped the prelims of the men’s 200 free in a new Meet Record of 1:36.04; that bettered the 1:36.20 set by Will Hamilton in 2010.

Carter, who is a citizen of both Trinidad & Tobago as well as the United States, recently began training in south Florida, and so far to great success it would seem. Bolles’ Josh Booth, a Brit who also recently moved to Florida, was 2nd in 1:37.49.

200 IM winner Steven Stumph is hunting another crown, with a 54.58 in the 100 breaststroke, though a familiar race is shaping up. He and Curtis Ogren duel’ed in the 200 IM on Friday (Stumph was the winner) and also the 400 IM this morning. Michael Duderstadt was 3rd in 55.08.

In a bit of a morning upset, so far, Bolles’ Santo Condorelli bettered his teammate Joseph Schooling in the men’s 100 fly 47.45 – 47.72. Condorelli obviously has the speed to get the job done in this race, but Schooling is the National High School Record holder whereas Condorelli had only been a 49-mid prior to this meet. Swimming side-by-side (with SwimMAC’s Matthew Josa in lane 3 thanks to a 48.15), these two will have a chance to settle up in finals.

Finally, Stuart Hennssey out of the Denver Swim Academy and Regis Jesuit High School, is the top seed in the 100 backstroke in 48.52. Carter, who is a great backstroker in addition to his freestyles, is the 2nd seed in 48.93, and Texas commit William Glass is 3rd in 48.94.

Kathleen Baker… is she not swimming the 4 x 200 free relay? If she is that would be five events in finals!

Well, Mission Viejo was not a power at the Jr Level in the 1970’s, in its early days it actually had many swimmers developed out of the club teams in LA and Orange County like Long Beach, Lakewood, and Huntingon Beach. Brian Goodell was the first real swimmer developed out of that program.

Plus all the other swimmers across the US that did not train with Mission, but competed for them!

Kathleen Baker is so versatile. And she looks tall. A future star?
Curtis Ogren vs Steven Stumph looks to be the battle of this meet on the men’s side. After the 200 IM they’ll swim the 400 IM and the 100 breast. The 15/16 NAG record in the 400 IM is almost impossible for Curtis Ogren. He has to gain 4 seconds. But in the 100 breast it’s possible.
Another possible NAG record is in the men’s 200 free with Maxime Rooney. The 13/14 NAG record is 1.38.94 by Nick Silverthorn and he was very close to that time in prelims.
Dylan Carter is perhaps the revelation of this meet. He swims very fast times on freestyle.… Read more »

Why do some swimmers wear nose plugs?

It’s most frequently seen in backstrokers, and it allows them to stay underwater longer while expelling less energy to keep water from going up there nose. Not the only way to accomplish this, but increasingly the most popular way.

If Bolles were competing at D1 Men’s NCAAs where do they finish? Top 15, Top 10?

We have never, ever seen anything like this. Not the Mission Viejo heyday, not Mercersburg or Peddie in eras past. Never.

To make an argument you’d need to go back to the best Mercersburg team in the mid 1980s (which beat Peddie and Mission Viejo) and the very best team was 1985. A few of those guys had NCAA cuts in high school but none had NCAA score times.

Go further back to 1970s and early 1980s and you get Mission Viejo teams with one-man individual outliers like Vassallo and Filiberto Colon and we are talking about NCAA point scorers. In the case of Vassallo NCAA champion type swims, so ok, that is 60 points. Not top 15 most NCAA years. We can say the same about Spitz as a high schooler breaking world records or David Nolan recently and say… Read more »