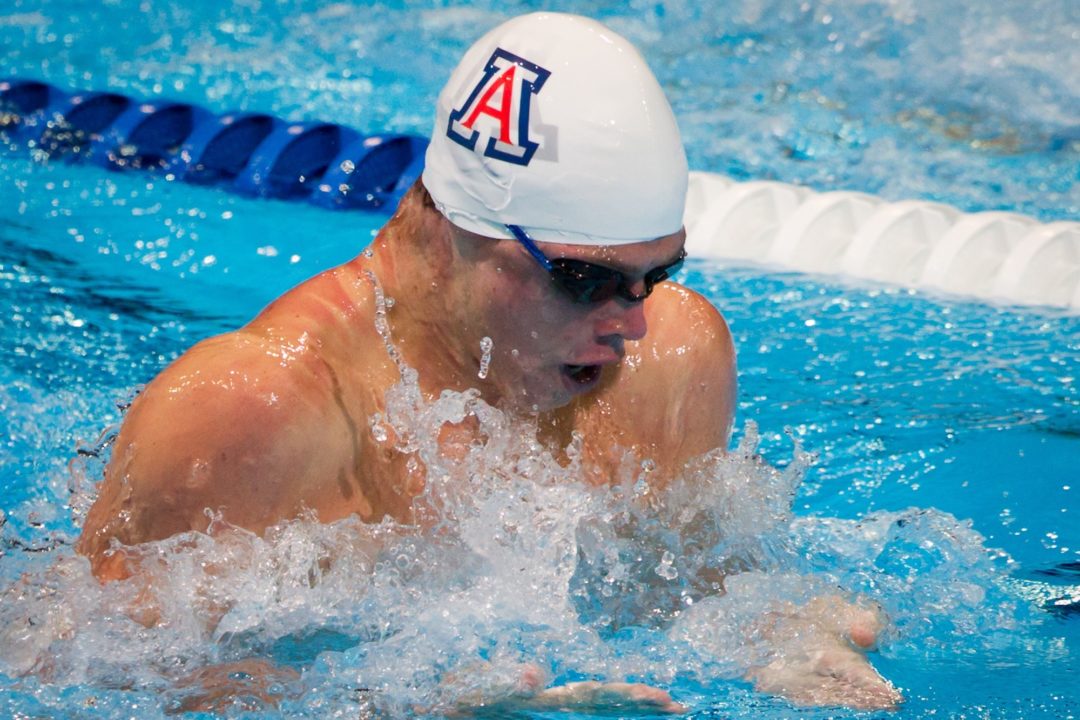 Now that everyone in the US knows about Kevin Cordes, it's time for the world to see him as the Americans begin departures for Turkey today. (Photo Courtesy: ©Tim Binning/TheSwimPictures.com)

Final bags are being packed and final tests are being taken as today the Americans set off on their Short Course Worlds quest on Friday. The team plans to arrive in Istanbul early, ahead of the December 12th start, and hopefully will sneak in some time to explore the phenomenally historic city of Istanbul.

The meet will be televised daily on Universal Sports in the United States, though details are fuzzy still about any online live streaming. The taped-delay broadcast will be aired at 8PM Eastern each day of the 5 day meet (December 12th-16th) on Universal Sports, and then again at 1:30 in the morning for the night owls.

The official meet website is launched, and today is the official test event in the temporary pool at the 16,000 seat Sinan Erdem Arena on the more modern, European side of the city. Everything seems ready (though of course no psych sheets yet) for a fast competition.

The American roster has shifted several times, but the final squad is all settled in under the guidance of head coaches Eric Hansen (men’s) and Chuck Batchelor (women’s) and their staffs. This is actually Hansen’s third time The Americans are one of the deepest squads at this meet; that is the norm for them, but in this year’s case, as national federations around the world try to regroup after the Olympics, many international countries have severely cut back their rosters.

The Brazilians are without most of their stars; as are the French, who focused on the European Championships that were hosted within their borders.

The Brits will have a decent squad included Fran Halsall and Michael Jamieson, but that whole federation is a bit of a mess right now with coaches and organizers and swimmers jetsetting to every corner of the world. The Australian federation is in a similar position, though if Kenneth To’s World-Cup title is an indicator, they’re faring ok emotionally. They send a small roster of just 19.

The South Africans are headed down that same dysfunctional path; they invited 25 to Short Course Worlds, but trouble is brewing over who would have to pay for their travels, their two biggest stars Cameron van der Burgh and Roland Schoeman have backed out.

The biggest threat to the Americans, on the men’s side, is the Russians. They’re always very good in short course, and though there are a lot of NCAA Champions on the United States roster, the Russians have international experience and are more accustomed to that extra stroke needed in a 25 meter pool. There could be a medley relay upset brewing, though the Russian free relays won’t be as good as they were in 2010.

Check out Garrett’s interview with World’s Short Course swimmer Laura Sogar this morning as she talks about Istanbul.

Pretty goood roster for the Us , even without Missy Franklin , Nathan Adrian or a few others . Great huge test for the young in the team ! Will be very curious to see how Cordes swims on top level , as well as Jimmy Feigen and Tom Shields . The medley relay will be epic .

Need to update the list. Kyle Whittaker, a late replacement, is missing.