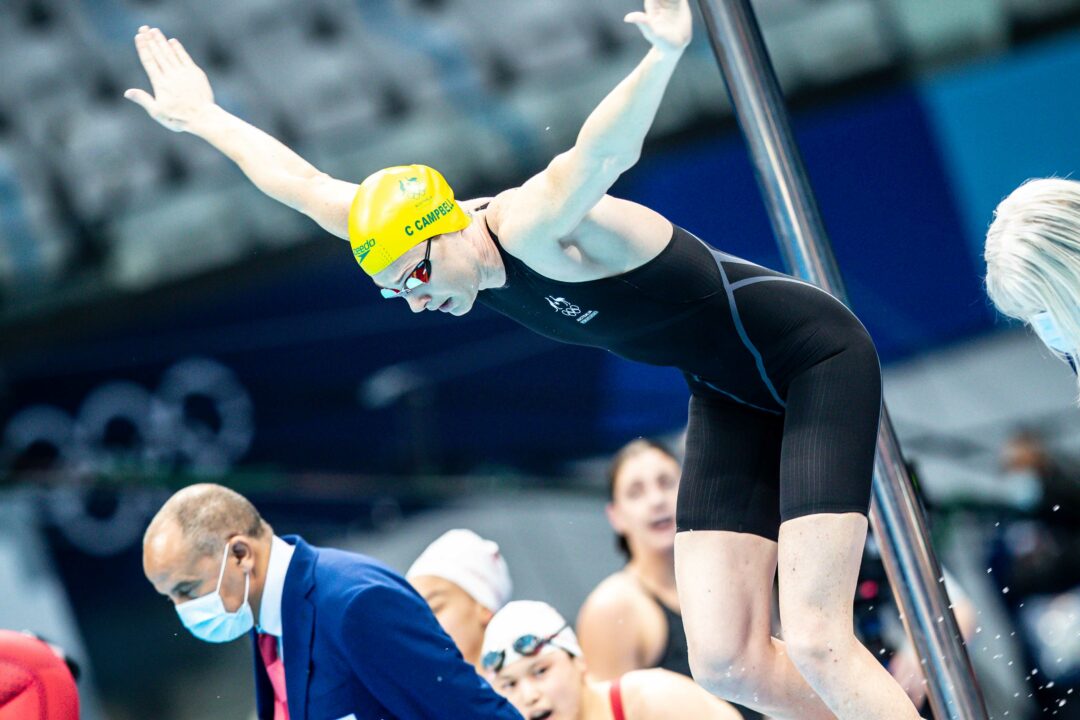 Australia just wrapped up another impressive relay performance here at these Olympics, as the women's 4x100m medley relay reaped gold in an Olympic Record. Current photo via Jack Spitser/Spitser Photography

Australia just wrapped up another impressive relay performance here at these 2020 Olympic Games in Tokyo, Japan, as the women’s 4x100m medley relay reaped gold in a new Olympic Record.

Hitting the wall in a collective effort of 3:51.60, the foursome of Kaylee McKeown, Chelsea Hodges, Emma McKeon and Cate Campbell combined to top the podium ahead of the Americans, who touched just .13 behind in 3:51.73. Canada rounded out the top 3 in 3:52.60.

The Olympic Record previously stood at the 3:52.05 the Americans registered at the 2012 Olympic games in London. The split comparisons between that prior swim and tonight’s Aussie effort are as follows:

For McKeon, this medley relay came just minutes after she scored her 2nd individual gold medal here in Tokyo, as she topped the women’s 50 freestyle field already earlier in the session.

As for McKeown, this relay is her 3rd gold and 4th medal overall as the 20-year-old scored 100m and 200m back gold earlier.

Lazy analysis. Wasn’t even a bad exchange. Just not perfect.

While alot of attention will go to their golden girls, Kaylee Emma and Cate, Chelsea was the unsung hero of this relay. We all knew AUS needed the breast leg to be within a second of USA, and she didnt only do it, the difference was only 0.5s.

Even if the other three legs didnt fire as much (by their own high lofty standards), it didnt matter thanks to her brilliance.

With all her 1:06s races and splits earlier, she really somehow found a mid 1:05s in her, and that was what AUS needed

Exactly, this was our weakest leg going in, with Chealsea below her best, but she came through. Between MKeon and McKeown, they could have picked up up a full second, and we know Cates gone 50.9 before in a relay, so this win was special.

Hodges and ZSC both stepped up in the breaststrokes…..the swimming Gods have really smiled on Australia in Tokyo!

My kingdom for a 1:05 Canadian breaststroker

Weitzel was given a .25 second lead, and yet left the blocks after the Aussies. Damn shame, because she swam so well and so fast. We all saw her reaction afterwards. She knew it. But that’s sports. And she’s still a freaking stud. Tough game, no?
vs

The whole reaction thing is not all that simple…you don’t want to risk getting disqualified for jumping in too fast. Weitzel was never going to catch Campbell if the lead was less than 0.5 sec plus she doesn’t have a great back half to make it happen either.

Lmao ‘ Retirees’ . I expect to see Sarah , Jessica & Libby in one of those over 55s estates

Hodges’ leg was decisive, she went for her ~PB start-adjusted with a fast beginning, well done!

So leading into Tokyo, Lilly King said the US women could (admittedly she did not say would) win all the women’s events.

The final standings were

You could say the American women got smashed like guitars.

Smashed?! I mean not really… USA LADIES won 18 medals (every person in the women’s team except 2 got a medal). And if you’re just comparing AUS women to USA women. USA bettered AUS IN 8 of the 16 events. And in 6 of them there were 2 USA girls ahead of AUS, so if you’re comparing the nations just against each other USA would actually come out on top. I’m not from the USA but you can’t deny the depth they have in almost every event and they consistently perform at every Olympics.

Australia had no entries in the IMs at all. So you can’t really say you bettered them there. But yes we don’t have the depth, probably because of our population and lack of funding for mid range swimmers

Oops how could I forgot Maggie Macneill