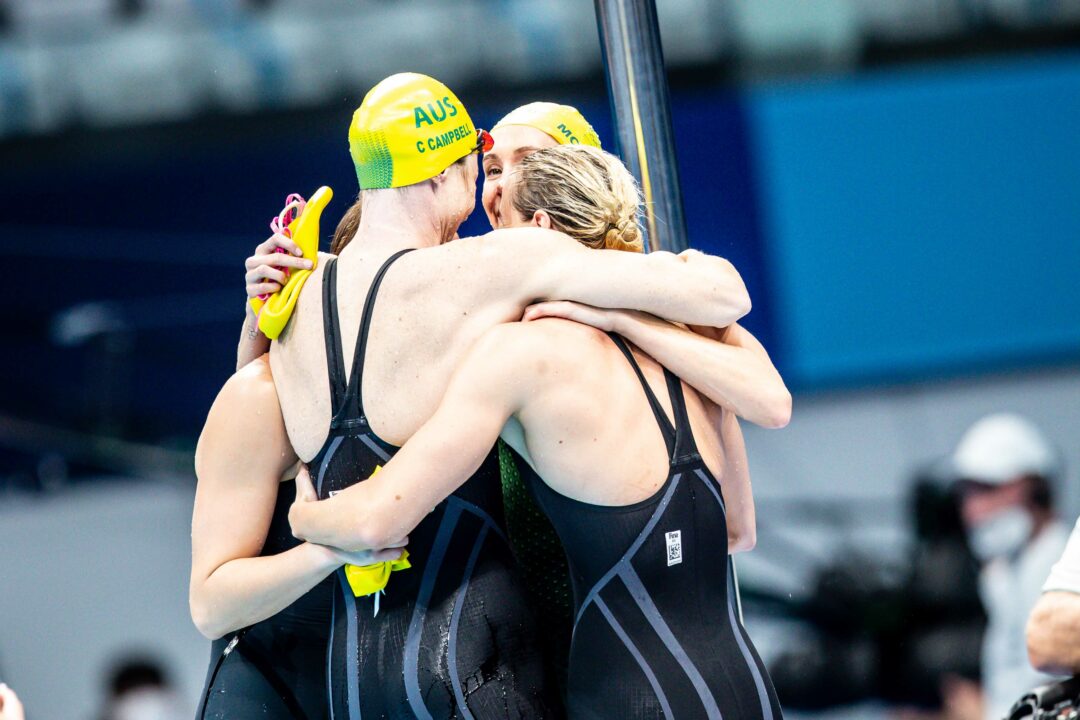 The Australian women broke the World Record in the 4x200 freestyle relay, going 7:39.29 to cap of Day 3 finals of the Commonwealth Games. Archive photo via Jack Spitser/Spitser Photography

The Australian quartet of Madi Wilson, Kiah Melverton, Mollie O’Callaghan, and Ariarne Titmus ran away with the gold medal in the women’s 4×200 free relay, rocketing to a new world record of 7:39.29. They finished 12.69 seconds ahead of the Canadians, who won the silver medal.

They’re the first team to crack the 7:40 barrier, and break the record of 7:40.33 that China set at the Tokyo Games by over a second.

Summer McIntosh led the way at the first exchange, leading off in 1:55.24 to put the Canadians ahead. Australia’s second swimmer, Melverton, caught the Canadians and had moved the Australians about a second and a half ahead by the end of her leg. O’Callaghan extended the lead, and Titmus anchored in 1:52.82, the fastest split of all-time.

The Australians were 1.44 seconds off the World Record pace when Titmus dove in. But by the 100, she had pulled back to only .38 seconds behind, and was right at the line at the final turn.

Titmus’s split is a crucial difference here for the Australian team. They tend to lead off with her as they did in Tokyo, where she split 1:54.51, well off the 1:53.50 she went to win gold in the individual event.

Another big difference is the addition of Mollie O’Callaghan. O’Callaghan led off the Tokyo prelims relay in 1:55.11, a world junior record, but the coaches made the decision to leave her off the finals relay. That decision cost them, as they could have used her as lead-off and had Titmus anchor, or given her a rolling start. They ended up with Olympic bronze, getting out-touched by the Americans.

The Australians have lots of depth in the 200 freestyle, and have had world record potential for a while, and they finally managed to put all the pieces together in Birmingham. Earlier in the meet, they swept the women’s 200 free podium, a harbinger of what was to come here.

I think this race is going to be crazy good in 2024…USA has some studs, too, who are just a little younger but could and should be fully capable of stepping up to meet this world record relay from Australia…

Claire Tuggle is a shot also. I know she hasn’t been a PB in her 200 Free since 2019, but she did go the second fastest 200 Free time in her career. PB is 1:58.21, went bronze medal at nationals (1:58.34). She will be going to UVA to train with the best of the best, and by 2024 comes around, she may be there. Talent doesn’t just go away when an athlete hits a peak. There can be many peaks in a career, and she could get back to where she was in the near future

Selectors got it right this time. The team dynamics and comradeship displayed by these four athletes is what allowed every swimmer to perform. The support shown to each other by this four looked tight so the W R was endangered from the beginning. Change the dynamics and the results may have been different.

This AUS w4x200 time would have won gold in Budapest.

It was a WR…so it would have won at any event.

The would have games is that if Allison Schmitt relay split at Tokyo on 4×200 for the us is in mid 1.55 then Us would have won gold and keep the WR

Would have taken WR to 7:35 and beyond reach of any other country for the next decade.

Ledecky Schmitt Franklin and McLaughlin would have went 7:34

Yes and I guess people like to play would have games and to say that wr is beyond reach is a bit of a stretch and look at China last year and their fastest split is in 1.54 and still win and broke wr and that’s why I like the relay cause it’s uncertainty on all four swimmers and you only need consistency in your time to broke wr

Absolutely laughing my head off at the guy who claimed, when everyone was requesting it, that SwimSwam shouldn’t include World Records in the records section of each event in the Live Recaps, saying “Don’t bother, this meet isn’t fast enough for it to be a factor.” Find him in the comments of a past article. Ridicule him. Eternally. Perpetually.

No, they meant it

And I pointed out that even the slower US Summer Nationals has WR in SwSw articles.

The 800m free might be sneaking up on us.
Pallister Titmus Melverton.
Commonwealth record alert

It’s gonna be interesting to see how Pallister bounces back from covid.

Indeed. Will be very interesting to see how the three Aussies approach this 800 as there are a number of other potential factors in play.

Firstly, Titmus does not necessarily hold a position of utter dominance over her compatriots in this one but this trio have a 10sec buffer over their nearest rivals.

Secondly, they still have the 400 on the last day with the very dangerous McIntosh lurking.

Therefore; do they go all out and look to rearrange the record books or will some of them do “enough” so as to leave enough in the tank for the more competitive 400 which also has Fairweather of NZL lurking should someone have a blow-out.

Will the Australia women win every freestyle medal except 400m Silver? I suspect so.

But, but, but but!!! short pool, micky mouse games, scared & afraid of the best, pulling out weak.

Fantastic swim, ladies! The next two years will be exciting to see if the Aussies turn this event into theirs like the 4×100 free or if the youth of the US can bring it, with both teams dropping this record down to 7:37! But for today, Aussies are #1. Way to go!

Exactly what racing is all about competition.

How pathetic and salty you sound.

Keep thrashing this WR in every threads.

Lol salty really who said I’m trashing this wr and you guys act like Aus the only country that can break the wr and also Us can also break the wr on relays without going into 1.52 and what’s pathetic is that you seemed mad at me for like no reason while I’m looking forward for these races on the relays

Until then, you just full of hot air

Aussies will dominate it.