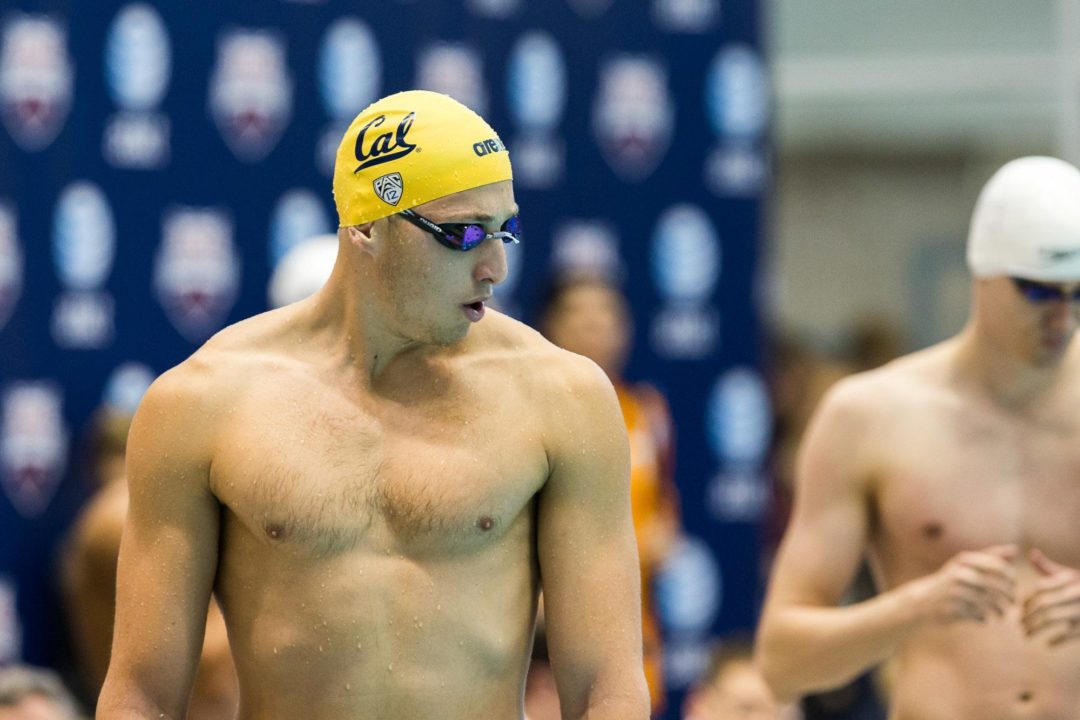 Kevin Cordes led the Arizona men to their first ever 200 medley relay win at the Pac 12 Championships. Archive photo via Tim Binning/TheSwimPictures.com

The swimming portion of the 2014 Pac-12 Men’s Championships begins Wednesday evening in Federal Way, Washington with the 200 medley and 800 free relays in timed-finals format. Not much separation will happen on the first day, but there are a lot of points already awarded through diving last week with the women’s meet, so the scoring should work in Stanford’s favor early on.

Refresh this page as we’ll update the recaps after each event.

A lot of questions were answered very early on in this Pac 12 Men’s Championship meet. The first was around how the Arizona medley would come together. A very veteran relay, despite a little rockiness of late, had no problem pulling things together for a 1:23.50 and a new Pac 12 Championship Record in the event, with the team of Mitchell Friedemann (21.78), Kevin Cordes (23.11), Giles Smith (20.09), and Brad Tandy (18.52).

For Tandy, that’s his first race in the NCAA after finally being declared eligible last week, and he showed why he’s so valuable to Arizona – that split will compete with anybody in the country. Also big was Smith’s 20.09, after he’s missed some action this semester with a reported injury – things seem to be coming together for him. Cordes is already splitting what he went at NCAA’s last year. Friedemann was the only one who was a little bit off on this race was Friedemann on the leadoff, but aside from him this relay was faster than the one that took 3rd at NCAA’s last year.

That time shows both how good Arizona’s medley is with Tandy on board now (their breast/free combo is the best in the country, and it’s not that close) and a change in philosophy perhaps with Rick Demont at the helm – Arizona has never before won the Pac-12 title in that event, and that’s by far the fastest they’ve ever been in it at this meet. It’s only their 6th Pac-12 relay title ever.

Cal took second four-tenths of a second back, and also under the old Meet Record, in 1:23.91. That included a 21.32 leadoff from freshman Ryan Murphy, a 20.10 from senior Tony Cox, and an 18.77 anchor from sophomore Tyler Messerschmidt.

Chuck Katis, a transfer from Harvard at mid-season, showed his impact already with a 23.72 split. While that paled next to Cordes, the best yards breaststroker ever, it’s already almost as good as Cal was getting last year from the now-graduated Trevor Hoyt, and is a split that will put him in the top half of A-final breaststrokers at NCAA’s.

The USC Trojans dominated the men’s 800 free relay and broke the second Meet Record in as many events with a 6:12.54. That’s the second-fastest time in the country this season, behind only the NCAA Record from Michigan.

The relay is even more impressive in that it included two freshman among its four, to go with two seniors. Dylan Carter led off in 1:33.61, followed by Dimitri Colupaev (1:34.16 – senior), Reed Malone (1:32.85 – freshman) and Cristian Quintero (1:31.92 – senior). With Colupaev capable of much faster than that, if everyone else can hold their spots, then this relay could compete with Michigan in a few weeks.

This relay was actually close between USC and Cal through the first three legs, but ultimately the Trojans had their biggest leg on the anchor in Quintero, which Cal’s Will Hamilton (1:34.88) couldn’t match. The Golden Bears took 2nd in 6:16.41, which puts them 5th in the country this year. The Golden Bears’ best split was 1:33.53 from Seth Stubblefield.

At first, the Utes’ strategy to leave Soedel off of the 200 medley relay was a bit murky. He tweaked his shoulder in warmups against USC, so we were wondering if that was a factor. As it turns out, they were using him in the 800 free relay as one of his four relay entries, which in hindsight was a great decision. They not only took 4th, but they hit an NCAA Automatic Qualifying Time and hopped past Arizona. Arizona took 5th in 6:23.93.

There was one very impressive time trial swim on Wednesday night, where Cal senior Tony Cox swam a 45.97 in the 100 yard backstroke. Other top times in time trials include a 1:35.81 in the 200 free from USC’s Chad Bobrosky.

We’ve manually tabulated diving, which was completed last week, so these scores won’t match with those you’ll see on the live meet results.

Stanford holds a big cushion thanks to their diving, Arizona is 2nd thanks to that big medley win, and with a balanced USC attack across all five scored events so far (three diving, two relays), the Trojans sit 3rd.

Bye bye Peter. You will prob not be missed.

Thanks, but no need to get jumped along with me. They don’t want to know what’s up. The long explanation was because this was the third time that I’ve seen this happen here, and I already posted what you just said twice before. This is just a slight twist on pretty much THE classic interwebs issue from the 90s til now. Hosting/hotlinking. Youtube purposefully ignores their side of this issue, so most sites mod out posts that aren’t properly hosted so their site can perform as expected. I know some people only go to Facebook etc., I shouldn’t expect so much out of them. What if it was my grandma I was trying to help, she wouldn’t get it. Seeya… Read more »

i know exactly what’s up. I love the videos. it doesn’t slow down the website for me. I appreciate what this website does. they are quite competent when it comes to the “interwebs”. and what if I was old, would that make a difference?

I think Peter was just asking for Bobo to just post the link instead of embedding the video. Since when Bobo embeds the video it slows down the page.

Oh, was he “just” asking him? In that 7 paragraph, incredibly egotistical comment?

It’s cool. I’m sure France isn’t so boring as here, and you have better stuff to do than keep up with the latest tech babble that is being shouted around the area in which I live. I’ll just slink away quietly when the site is doubled-over, I’m usually only here around March anyways – I’ll keep it that way. Cheers Bobo

Basically peter clearly has a personal beef with Google and is pretending they haven’t updated YouTube for the better since they bought it 8 years ago.

Peter your long rant is bogging down this comment section more than bobo’s videos, which are constructive to us swimming fans. If you care that much, go find another video site to post them on, but make sure you search for it using bing because Google won’t work.

Seriously? Can you read? I have used google since it’s beta stages, and won a research trivia contest because of it being our secret tool at the time. The algorithm is great, the business practices are terrible. I couldn’t be more flabbergasted at the response of someone trying to help you guys keep access to what you want. Good luck y’all, hope you don’t break the toys you’ve been gifted.

Sorry. I didn’t understand anything. 😯

To way up above, thanks Cathy. Can always count on you 😉 now, the one embedding the videos, making browsing and commenting a chore…

TL;DR warning: skip to cliffs if bored by tech talk…
Bobo, my delightfully enthusiastic swimming fan comrade, just fyi, since last time you didn’t get the memo when it wasn’t explained in detail, I’ll try again: google runs youtubes servers more poorly than any other farm on the planet. Please stop embedding youtube videos. Link to them, with raw html if you have to, or host them yourself. Everything Sergey Brin touches, turns gold-plated, but is hollow and soulless. Even running openDNS or hopping on google 8.8.8.8 or 8.8.4.4 DNS will not help speed up… Read more »

Who cares who throws gum on the street, or smokes in a restaurant, or delays the subway, or pulls a fire alarm at school? I thought the same way when I was 12. Could you be lazier than begging somebody else to type a few words into google for you and posting the results on someone else’s site? It’d be like saying, I like movies, so please project them on the front of my neighbors house so I can watch them. I’m about done with this place, aside from gathering news. The discourse is strangely lacking, considering the type of swimmers and coaches that I know populate the sport. Back to tor-ing up the onion server for kicks when bored.… Read more »

bobo helps all people who come to this site by providing footage of many races and commenting on everything. if you don’t like the “discourse” on this site then please do leave immediately and never come back. thank you.

Yes, sir. I can do that. You deserve what you get Sam. It’s like trying to reason with project managers who are one-inch from being fired for repeated server abuse. They just don’t see it coming, or believe that there is a world outside of their immediate wants. Instead, shoot the messenger. I bet you haven’t wondered at all why the site has been so glitchy, you just want yours. All you would have to do is copy and paste a url. I wonder how you fail to grasp this. Carry on, I won’t stand in the way of you acting a fool any longer.

Thanks for the video! Funny to see Giles Smith stand next to Cordes. Giles get’s it done, repping all of us under 6 feet!