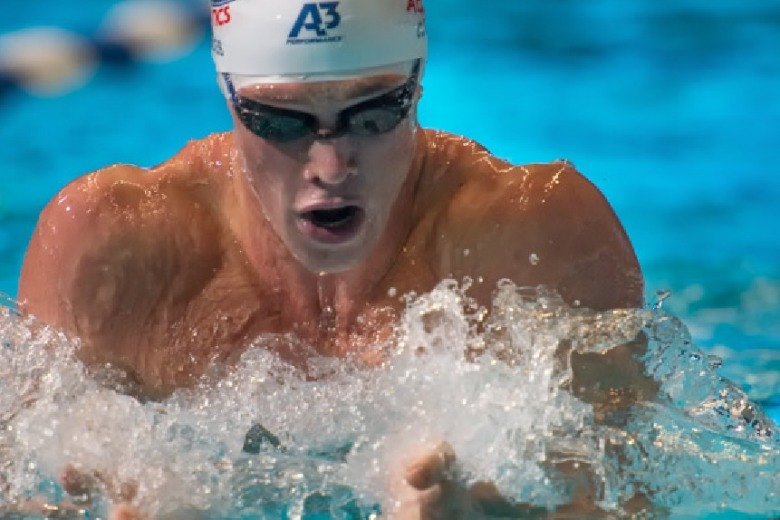 Arizona's American Record holder, Kevin Cordes, is the top seed in the men's 200 breaststroke for tonight's session of the PAC-12 Championships. Archive photo via Tim Binning/TheSwimPictures.com

Cal sophomore Jacob Pebley comes into prelims of the men’s 200 back as the top seed at the 2014 Men’s Pac-12 Championships, but David Nolan and Ryan Murphy won’t let him have that title without a fight.

Headed into the final day of this meet, Cal has opened up a 50 point lead (including all diving), and will have four extra A-finalists tonight to boot. Though there’s still the matter of the 1650 free in the evening which won’t be accounted for in these up/downs, Cal’s Jeremy Bagshaw is the top seed in that race and swimming well, so that won’t help Stanford much (though they should outscore Cal in that event alone, with the 2, 7, 8, and 10 seeds, to Cal’s 1, 14, 17, and 28 seeds. Cal will get more points than seed shows, though, as Adam Hinshaw is seeded in a no time, but will definitely score.

This is Cal’s meet to lose. It’s still close enough where a DQ could cause a big swing,

See the full lists of up/downs, along with scores after day 2, in the chart below.

California freshman Ryan Murphy earned another win with a 1:39.21 to win the event. His teammate Jacob Pebley finished second at 1:40.38. Both swimmers from Cal were under the old PAC-12 Championship record. Stanford’s David Nolan finished third (1:40.60), and his teammate Will Gunderson (1:42.85) earned fourth place points.

Utah’s Nick Soedel has finally put it together in the 100 freestyle. After two years of false starts, Soedel was clean this morning to take the top seed in 41.97 for Utah. Tonight, he was right on his time from this morning, touching the wall at 42.00 to win the event. USC’s Christian Quintero reached in for second place with a 42.47, dropping a few tenths from his morning swim. Seth Stubblefield led his Cal teammates Tyler Messerschmidt and Fabio Gimondi to a 3-4-5 finish, posting times of 42.63, 42.86, and 42.12, respectively.

Kevin Cordes wins the 200 breaststroke for Arizona with a new meet record time of 1:51.80. Josh Prenot earned second place points, touching the wall at 1:54.37, dropping more than a second from his morning swim. Sam Rowan, Cordes’ teammate, dropped .77 from his morning swim to move from fifth place into third place tonight. USC’s Morten Klaskov finished fourth with a 1:55.86, and Max Williamson from Stanford finished fifth at 1:56.20.

Arizona State senior Alex Coci made a huge leap to win the 200 butterfly, dropping 1.58 seconds from his morning swim to post a time of 1:42.97. Will Hamilton finished second for the Golden Bears, posting a time of 1:43.13. He led his CAL teammates Long Gutierrez and Marcin Tarczynski to a 2-3-4 finish. Gutierrez touched at 1:43.64 and Tarczynski finished with a 1:43.75. Tom Kremer earned a fifth place finish for Stanford with a 1:43.81.

Weird. A lot of Pac12 teams do some weird things that I can’t wrap my big green head around…

Arizona must have decided that it would be better for him to do swim slightly faster on the relay than get 9 extra points from the B final.

I wasn’t asking if he’d get in, I was asking what he’d swim… clearly the 50, but I was questioning whether the breast and 100 times were good enough.

My bad. Thought with all the scratches they had a bunch of guys time trialing