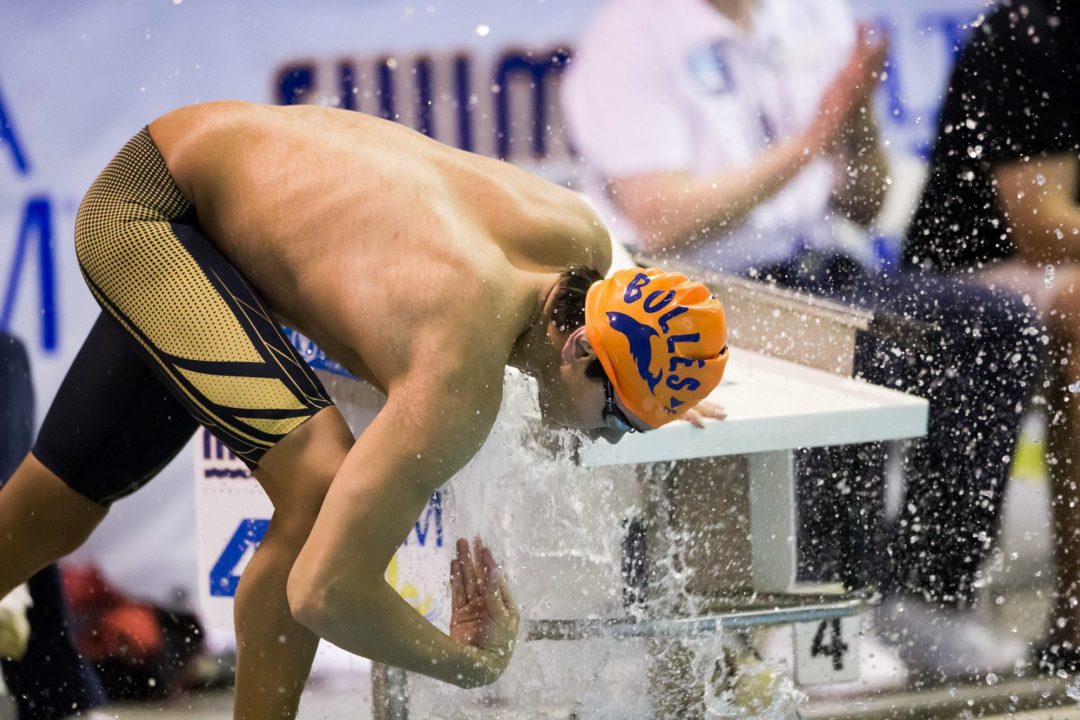 The Bolles School’s Joseph Schooling continued to be the premier swimmer of the 2014 Southern Premier meet in Knoxville, Tennessee, as he won three more races on Saturday for the Bolles School swim team, bringing his total on the weekend to 5 at the invite-only meet.

First, he split a 20.46 on the butterfly leg of Bolles’ winning 200 medley relay, along with Matthew McPheters, Luke Georgiadis, and William McKinney. Schooling’s split on that relay actually out-split his freestyle anchor, and was only three-tenths shy of what his future Texas Longhorn teammate Jack Conger split at the Big 12 Championships. When Schooling arrives in Austin next year, Eddie Reese will have the option to move Conger to his primary backstroke, use Schooling on the fly leg, and have one of the best young back/fly medley combos in the country.

The hosts from Tennessee Aquatics took both 2nd (1:31.89) and 3rd (1:31.95) place in this relay. That includes using pro swimmer Brad Craig on the breaststroke leg of their B medley, where he split a 23.99. Had TNAQ put together their best medley, they would’ve challenged Bolles for the title.

In Schooling’s final event on Saturday, he finished with a 48.57 in the 100 yard backstroke, which was a personal best for him by half-a-second. Connor Green of Bluefish took 2nd in 48.87 – just missing his personal best as well. Mary Keaveney of the Stingrays in Georgia was 3rd in 49.85.

Though Schooling won’t likely be swimming the exact same 100 fly/100 back double in college (he’s very good in the 200 IM), he could still have a day-two triple in the NCAA format that this meet mirrors, between two relays and the 100 fly. He demonstrated this weekend that he’s capable of handling that triple quite well.

Among the event winners includes the aforementioned Craig, who was a 53.46 in the 100 yard breaststroke. He beat out Ben Hendrickson from Stingrays who was a 55.84 for 2nd, and Bolles’ James Daugherty who was a 56.07. There’s been a lot of excitement at Bolles surrounding the 15-year old Daugherty, who people close to that program feel could be their next big star, and another seven-tenths of a second drop in this meet brings him ever-closer to that level.

Tyler Sullivan of the Lakeside Swim Team, coming off of a good performance at the Kentucky High School State Championship meet two weeks ago, won the 200 free in an even better performance on Saturday. He swam a 1:39.06 with incredibly even splits: after opening in 23.3, Sullivan was dead on with three-straight 25.2’s to finish his race. That included overcoming TNAQ’s John Myhre (1:39.16) in the last 25 yards to break basically a dead-heat coming home.

Out of the 12 & under ranks on Saturday, one of the highlights was Coleman Kredich, son of the University of Tennessee head coach Matt Kredich, who won the 100 free in 54.95 – almost a second clear of his nearest competitor. His dad was spotted on deck taking on some timing duties throughout the meet. Coleman Kredich also won the 100 IM in 1:04.18 on Saturday.

On the women’s side of Saturday’s swimming, the day some really great racing, including a 100 fly where the winners were separated by just .12 seconds. SwimAtlanta’s Aja Malone went out very fast, turning in 25.3, but Asia Seidt of Lakeside stormed home to take the win in 54.37; Malone took 2nd in 54.49.

Carrie Johnson of the Nashville Aquatic Club took 3rd in 54.80.

Seidt would pick up a second win on the day, though in less contentious circumstances, running away with the win in 53.50. This time it was Seidt who set the pace early, and she didn’t let off on the way home.

Hannah Magnuson of Triton Swimming took 2nd in 54.89, and another Lakeside swimmer Sydney Sell was 3rd in 54.91.

Zeiger got her win earlier in the day in the meet’s real ‘star studded’ match-up – the 400 IM. She faced off against her fellow Junior National Teamer Leah Stevens of Lakeside.