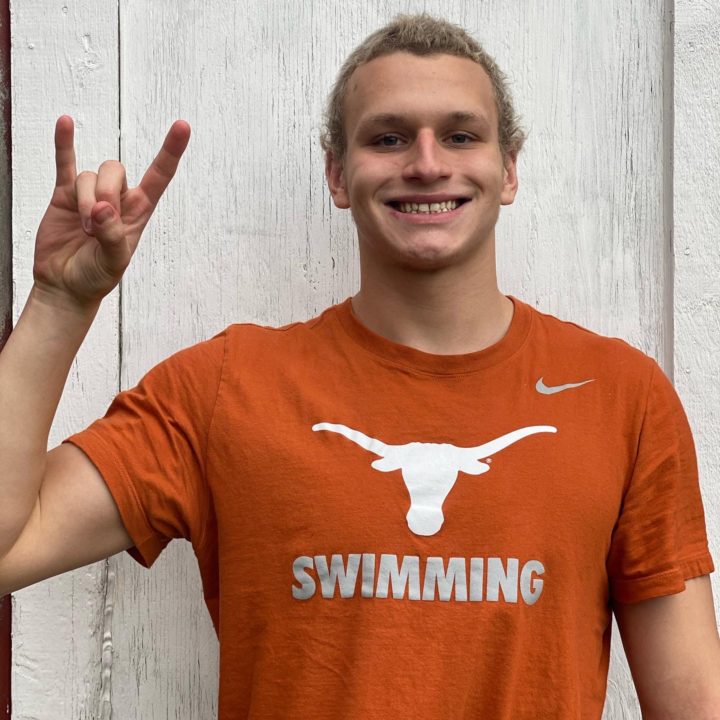 The Longhorn's have gained a verbal commitment from Alec Filipovic, whose best times would have placed him in multiple A finals at the 2020 Big 12 C'ships. Current photo via Alec Filipovic

The University of Texas has gained a verbal commitment from Alec Filipovic, the #6 recruit out of the boy’s high school class of 2022.

“I am proud and excited to announce my verbal commitment to the University of Texas. I’m proud in myself for the constant work and drive that brought me to where I am and will be in the future and I’m thankful for all my SCST coaches, teams, friends, and family that have helped excel me in swimming. HOOK’EM 🤘🏼🤘🏼”

Filipov’s best 100 fly time is from St. Charles Swim Team’s time trial in late October where he dropped .20 seconds from his previous best which he swam at the 2020 Illinois State HS Championships.

That has been addressed for the fall of 2022, at least, between Filipovic and reclassified 2021 Holden Smith, who has been 47.84. They’ll be joined by Tim Connery, a clutch recommitment from Michigan, who has a best of 46.73 in the 100 yard fly already. He should pick up the reigns to that leg next season.

While Texas has turned out their share of sprint butterflies in the past, including the defending Olympic Champion in the 100 fly Joseph Schooling, they are thinner-than-normal headed into this season. Senior Alvin Jiang is the early NCAA leader this season with a 45.75 and is a national championship contender, but they aren’t very deep behind him.

Keeping alive the Bill Stapleton, Brian Cisna IL pipeline! I’m sure there have been others since.

Congratulations Alex. You full name, Aleksej Filipovic, sounds like Serbian. Hope so… it would be two Serbians in 2022 at Texas if true…

Ya my dad is Serbian that’s the last name and my mom is Russian that’s my first name.

A lot of top notch swim talent coming out of Illinois these days.

Totally agree. Illinois has had some absolute studs come through over the years.