Holden Smith Decommits from Alabama, Recommits to Texas for Fall 2022 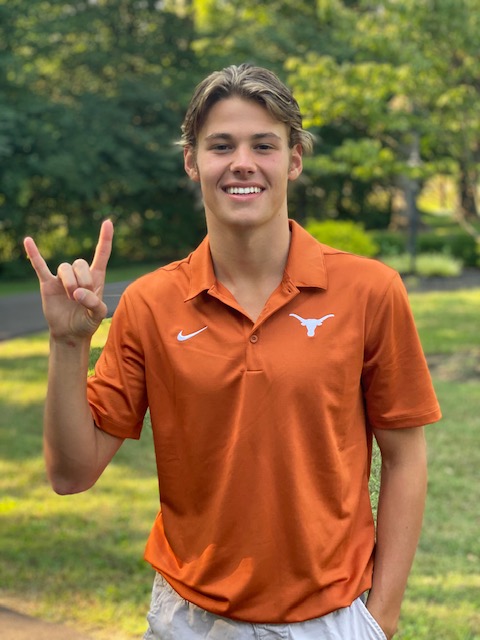 After committing to Alabama in 2019 and then deferring his enrollment until the fall of 2022, Holding Smith has now decided to attend Texas instead.

“I feel blessed and honored to announce my verbal commitment to further my academic and swimming goals at the University of Texas.  I want to first thank my Lord and Savior Jesus Christ. Also, I want to thank (Texas head coach Eddie) Reese and (Texas  Collins for this amazing opportunity, and I can’t wait to become a member of the legendary Texas swim team brotherhood!  HOOK EM!!!

Smith, who attends St. Xavier High School in Louisville, announced that he would take a gap year in April. At the time, his father Kenneth Smith said that the plan to take a gap year has been in place since before the global coronavirus pandemic halted swimming for most of the world, but that current conditions and uncertainty has made the decision feel more validated.

He originally committed to Alabama during his junior season of high school.

Smith also split 21.59 in the 50 fly on St. Xavier’s winning 200 medley relay at the 2020 Kentucky High School State Championship meet. He won 4 state titles in 4 swims at that meet, including individual wins in the 200 IM and 100 fly, and as the leadoff leg of the winning 400 free relay (where his best time from above was swum). St. Xavier were the runaway state champions, scoring 592 points: more than double the runners-up from Highlands High School (193 points).

This makes Smith Texas’ first commitment for the fall of 2022.

The Longhorn men were seeded to score the most swimming points at the 2020 NCAA Championship meet before that event was canceled. With their diving crew being one of the best in the country, they were the favorites at that meet before it was canceled because of the ongoing coronavirus pandemic.

While Smith is a loss for Alabama, the blow was softened this week by a new 2022 commitment: #16 recruit John Hayes.

Congratulations, Holden. You made the right choice! Use that gap year to put some muscles on. With another 20-25 pounds of muscles, this kid will be very fast between the ropes at the Texas Swim Center.

Hmmmm, weird. A little fishy with the reclassification and then changes his commitment. Especially when another kid from Louisville just committed to Bama…

Will he really be a factor at Texas? I guess with everyone being able to swim Big 12, it gives them a shot?

He’s definitely a quality swimmer who has potential to improve and be a factor anywhere. Just a strange recruiting process I’d like to know more about.

Ask him then GA Boy. Don’t be shy.

He goes 47.8 in the 100 fly and has 2 years before he starts his college career. There’s no guarantees in this sport, but plenty of swimmers have gone from 47.8 to NCAA qualifier in a 6 year span (2 At home+4 at Texas)

No man, if these kids aren’t in the top 10 in the rankings they will never develop into anything *sarcasm

Maybe they pulled his funding and gave it to the other guy. What is the cost comparison between TX and Bama. Maybe difference in perception on how these two schools handle covid

Probably had some quality time on his Texas visit with Rooney, who is also not shy about his religion.

That is a silly response. The University of Alabama ranks second nationally among public universities and fifth among all universities nationwide in enrollment of National Merit Scholars for the 2018 entering class. Football money hasn’t just been kind to the athletic department.

I feel like the Alabama men’s team doesn’t have as many people as it used to?

This is true. The Saban era has completely changed the university in the last decade. Doesn’t their team also generally have one of the highest team GPAs in the NCAA each year?

It’s absolutely laughable to pretend that there is literally anyone on the planet that would argue that Alabama is a better academic experience than UT Austin. That merit scholar piece of trivia is solely due to the fact that Alabama gives full rides to all of them. It does not reflect an actual raising of academic standards across the university.

Good students thrive at, and do well after graduation, from basically any big state school.

Alabama has highly-ranked programs in accounting and MIS, it has a very well-regarded social work program (though there’s not much money in that, so I guess for some of you, that doesn’t count).

Every big public university has strengths and weaknesses. Texas has more strengths than Alabama does, though, that’s true.

I didn’t say it was a relative strength to UT. I said it was a strength. Alabama accounting grads do well.

Trying to compare schools on the margins becomes a tedious activity that doesn’t really mean much, so it’s not a game I usually play.

Ask anyone to compare a degree from Alabama and Texas Austin. You can buy National Merit Scholars to attend, but that doesn’t make an education. Texas Austin has years of investing in curriculum, faculty, and resources that allow it to be a top global academic institution. Alabama is not even close.

Adding to your point since I am currently helping my kid create her college selection master list:

I hope you’re joking when you say they rank 2nd nationally among public universities. Are you leaving out UCLA, UC Berkeley, University Of Michigan, UVA, and Georgia tech? I could go on and on

Why would a swimmer go to say Louisville, NC State, Alabama, Auburn, etc? You use swimming to get a great education. There is no money in life after swimming. Go for the degree. This kid absolutely made the right decision to go to Texas Austin over Alabama. Alabama is a jock school where academics mean nothing.

Hey, come on now. At least NCSU can still boast its top-30 engineering programs in the nation. Still long way to go to play catch with the likes of Cal/Stanford/MIT, but it’s not too far off from Texas/Purdue/UIUC. And we all know what STEM degrees can provide in life after swimming.

If you are doing business, top three places to go are Texas, Michigan and Indiana.

Highly recommend swimmers do STEM if they can pull it off. Sets them up for an excellent post-swimming career.

Yes, NCSU is not yet on the level of Purdue/UIUC overall (except for some majors like statistics, nuclear/bio engineering, etc). But to say it’s far from those 2 unis in terms of research profile is also wrong.

Again, not yet on the same level, but “far from” is a stretch.

Anw, I’m sorry I went off the rails with all these NCSU arguments. Sometimes I can be pretty defensive with how my school is generally perceived vs. what’s actually true.

Just a note. No employer really cares about your GPA. Employees look for someone with great work ethics, can handle taking No’’s, and committed to winning no matter what it takes… This is why college scholarship athletes are an employers best hire!

By your logic, the top 10 should just go to Stanford every year and a bunch of other top swimming and academically ranked schools including Berkeley, Michigan, USC, UVA and others before Austin. I’ve always been an academic snob, but the reality of the undergrad experience is really defined by who you are around on a daily basis on campus and what you can do with your degree when you graduate. Do the types of firms you want to work for recruit on your campus or can you get into the grad schools you want to by going to school X? Can you be around the types of people you want to be around on a daily basis going to… Read more »

Unfortunately is not what you know it’s who you know when you graduate. My daughter graduated from Troy University. She was a scholar athlete and had incredible work ethics… She’s in medical sales and rank 2nd I the country after just one year…

They paid for those students and they went there for a full ride. Doesn’t mean the education is better. Chlorine on the brain.

Is there something wrong with a university trying to improve its students’ academic make up?

Read the stat. Second in enrollment of national merit scholars.

I just love how everyone has an opinion on what schools kids can and can’t go to like they’ve been in the position to decide between two division 1 programs lol. If a kid wants a great education he should go for that, if he wants a great athletic experience he should get that. Holden is getting both at UT.