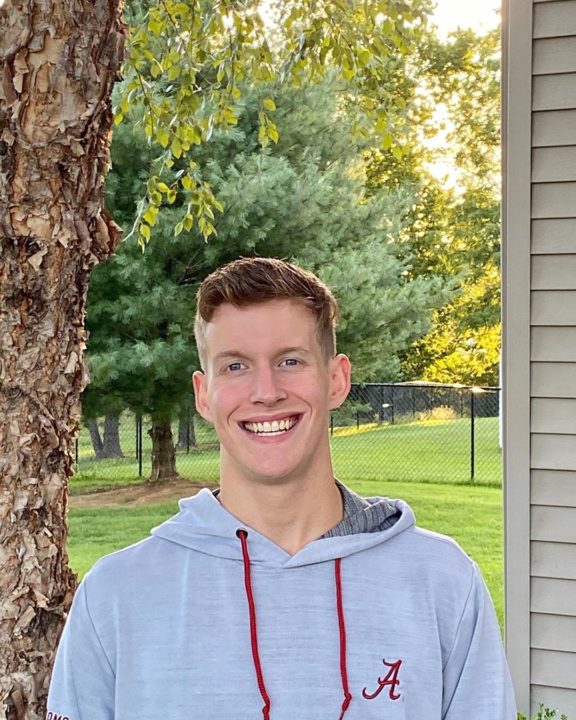 Kentucky High School State Champion John Hayes, one of the best middle-distance freestylers in the class of 2022, has verbally committed to Alabama.

John Hayes, a 3-time individual high school state champion in Kentucky, has verbally committed to Alabama. A high school junior, Hayes is expected to arrive in the fall of 2022. He is the 16th-ranked recruit in the boy’s high school class of 2022.

I’m excited to announce my verbal commitment to continue my studies and swimming career at the University of Alabama. ROLL TIDE🔴🐘

He is the 3rd top-20 boys’ recruit to have announced his verbal commitment so far, following Lance Norris and Michael Cotter, who committed jointly to NC State last week. They are part of about 25 swimmers in the class of 2022 who have committed to D1 programs. This in spite of the challenges facing the class, who are unable to take official campus visits or meet with coaches or team members face-to-face.

A year later, he dropped a lot of time and won both events at the Kentucky State Championship. That included a 5 second drop to go 4:26.37 in the 500 free, and dropping over 2 seconds to go 1:37.24 in the 200 free. He needed those drops to fight off another very fast middle-distance freestyler in the state, Jack Anderson, who is also a junior this year. Anderson has not yet made his college commitment.

Middle distance freestyles were not a strength of Alabama at the 2020 SEC Championships, which wrapped up Coley Stickels‘ first season leading the team. The 11 points they scored in the 200 free was their lowest-scoring event. They did better in the 500 free thanks to distance-oriented swimmer Nico Hernandez-Tome, who was 8th in that event, but he is transferring to Florida in 2022 after sitting out next season.

With Hayes’ addition, though, that building will go into overdrive: even with 2 years to go before he begins his college career, Hayes is already faster than all of those listed above in his best events.

What is Alabama doing in recruiting?? How do they do it?