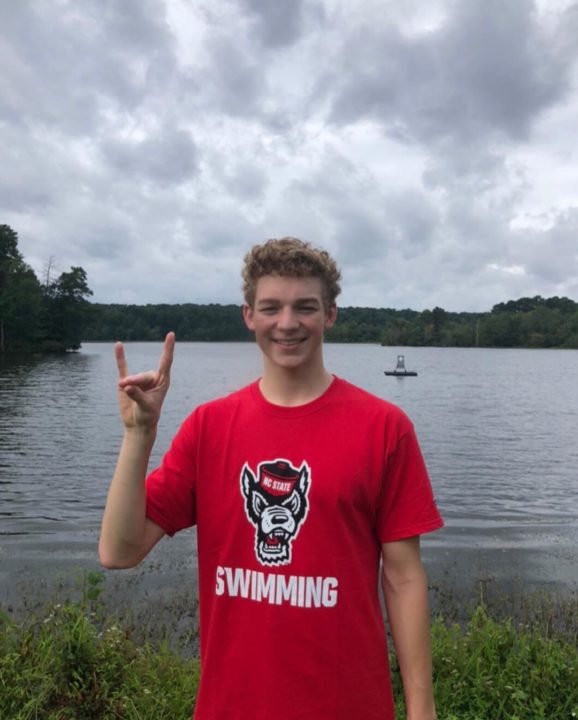 Cotter, the best 200 freestyler in the class, announced his decision today simultaneously with #14 Lance Norris; both are going to NC State in 2022. Stock photo via Jack Spitser/Spitser Photography

#17 Michael Cotter of the TAC Titans has verbally committed to North Carolina State University, becoming the first* boy on SwimSwam’s top 20 rankings from the high school class of 2022 to make a college choice.

First has an asterisk above, as Cotter is technically tied in timeliness with his TAC Titans teammate, #14 Lance Norris, as both boys are top 20 recruits who announced commitments today simultaneously. In any case, NC State is the big winner, as both are heading to Raleigh in fall 2022.

Cotter is the fastest 200 freestyler in the class, and he’s merely a second and change behind Norris’s class-leading 500 free best.

Cotter is a rising junior at Green Hope High School, and he’s the defending North Carolina High School 4A Champion in the 200 free.

Proud to announce my verbal commitment to swim and study at NC State University🐺♦️ I’d like to thank everyone helped me get to this point🤘🏻 GO PACK!!

Like Norris, who has improved in virtually every event during pandemic, Cotter has extended his lead as the class’s top 200 freestyler. He dropped from 1:36.91 pre-pandemic to 1:36.41 in the event at TAC Titans’ early August invite meet with the Marlins of Raleigh.

That’s not all, though; look at the chart below for Cotter’s pandemic gains in some of his best events, which have been most significant in the distance events:

Their distance group is currently led by rising sophomore Ross Dant, who was 4:13.77 in the 500 and 14:37.69 in the mile last year. The Wolfpack put two men up in the 500 free A-final at the 2020 ACC Championships and had four men touch in the top seven in the mile at that meet.

NC State has a remarkable incoming class, though, ranked #3 in the nation. Also in the class is Colorado’s Lukas Miller, a boon for their mid-distance group at 43.5/1:33.4. In their class of 2025, they’ve picked up six men so far, five of which are ranked in the top 20, including the #1 prospect, Aiden Hayes.

Congratulations Michael! Welcome to the Wolfpack Nation! We’re so glad to have you!

Seems as if something special is happening in Raleigh

Huge quality class for Pack! Congrats to all.