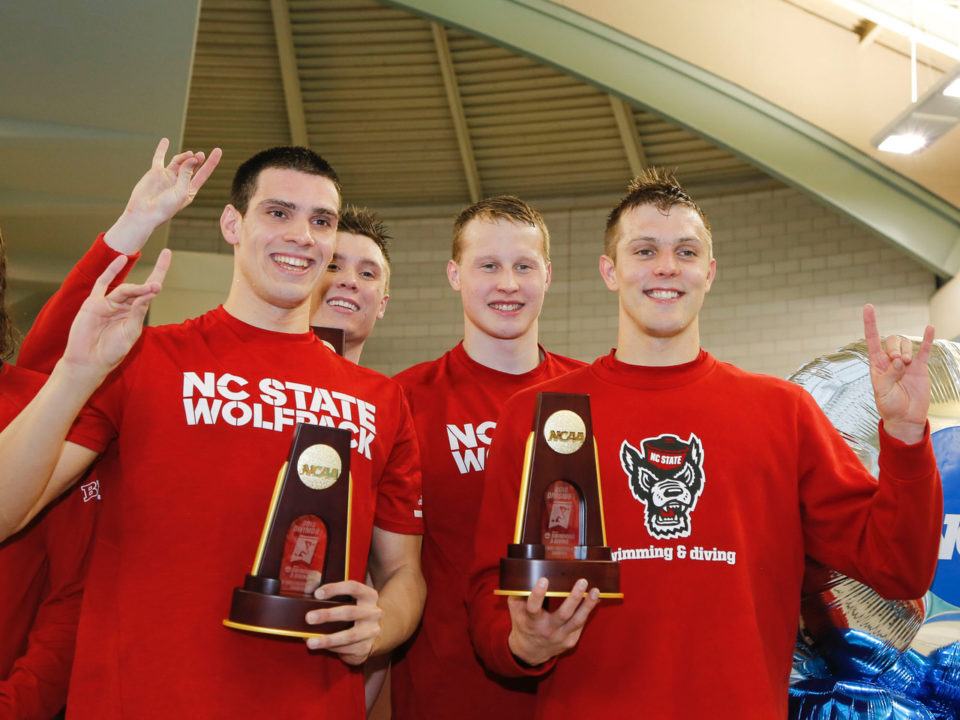 The 2018 Men’s NCAA Championships are underway in Minneapolis, Minnesota and the first night of competition did not disappoint. Tonight’s session was a quick one, with only the 800 free relays being contested, but there was plenty of fast swimming. NC State posted a blistering 6:05.31 to crack the NCAA Record and win the title.

Zach Apple split a sneaky 1:30.74 at the end for Auburn. No one seemed to notice since they got 17th.

What in the heck happened to Auburn? They had a great anchor of 1:30.7 and finish 17th?

Molacek definitely has to be the MVP of this relay. Came to NC State with a best time of 1:35.12, swam during his gap year last season. Splitting a 1:32.1 is phenomenal and shows just how much improvement he has had since getting to Raleigh. All four boys did fantastic, but that end result is not possible without Molacek busting through the door in such a big way in the 200.

Where was Florida the predicted winner??

How’d that swim by Hugo compare to expectations? Curious if he’s off SEC times or not.

Hats off to NC STATE they are an amazing team and program. Lead by amazing coaches. The heir apparent to Coach Reese is Coach Holloway. WELL DONE.

Rooney and Szaranek had no drop from SECs. Gators could drop to fifth or sixth if some of there swimmers missed taper. A 1:33 won’t even A final for Rooney this year probably not even top ten. Overall though looks like this could shape up to be an exciting meet with something to look forward to on the last day with a tight race 1-3.

Top 4 all had major records:
1. NC State — Fastest 800 Free relay time in history
2. Indiana — Fastest individual flat start 200 Free time in history by Pieroni
3. Texas – broke its own American record, as NC State and Indiana each had non-Americans on their
squads
4. Florida — Coach Greg Troy set and all time record for depressing swim blog fandom by not having Caeleb on the Florida squad! The still managed a fine 6:09.52 without him, 0:04.21 back from NC State’s winning/record finish. But since we are, after all, talking internet trolling and speculation here, had Dressel been substituted for Florida’s slowest leg (former USA Swimming 200 LCM Free… Read more »

Florida woulda won. I think caeleb would’ve done something similar to the IM race at secs and destroyed 1:30 barrier not just break it.