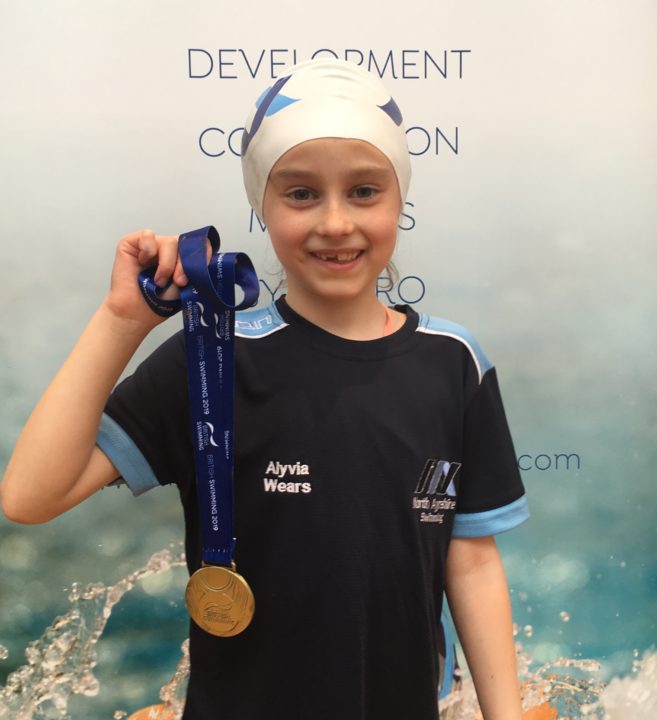 Adam Peaty gave his 50m breast gold medal to a 7-year-old fan, making yet another major impact on the sport he influences so much in Great Britain and beyond. Current photo via North Ayrshire Swimming

But, his presence is still being felt on-deck at the storied Tollcross International Swimming Centre.

After winning the 50m breast in a wicked-fast time of 26.49, 24-year-old Peaty took the time to hand his gold medal to North Ayrshire swimmer Alyvia Wears.

7-year-0ld Wears was so thrilled with her new memento, she wore proudly to her Development Squad training session the following night.

Of the experience interacting with one of the world’s best swimmers and a British athletic hero, Wears’ dad, Kris, commented, “We were stunned!

“Alyvia was leaning over the barrier as he was walking past and we shouted ‘Hey, Adam!’

“He stopped, looked up, and signed her autograph book. Then he said: ‘do you want this?’ and took off his medal and passed it up to her. We couldn’t believe it!”

Peaty is known for being a man for the fans, having offered up his medals in the past. At the 2017 European Short Course Championships Peaty also wowed a crowd member with his 100m breast gold medal.

Has anybody noticed the difference in medal ceremonies at Nationals in different countries? The worst one is in the Unated States where swimmers don’t look much caring of being National Champion. The most pompоus is the Russian one. The medals were given by The President Of FINA Julio Maglione himself. Is he living in Moscow and just happened to be nearby?

Penny Oleksiak did the same with her 200 Fr gold at Canadian trials – huge motivator for young fans! (Loretta I can send you a great photo to complement this story).

Class. Act. Hard not to like the guy. Competitive as all get out, focused, measured, and truly loves and gives back to the sport.

What you said is true. And young swimmers will be super happy to get any personal thing from their Hero. Even torn swimming cap. But would Adam Peaty give away his Olympic or WC medal? He has more than one in his collection. Why does he need to keep that many if he can make more children happy?