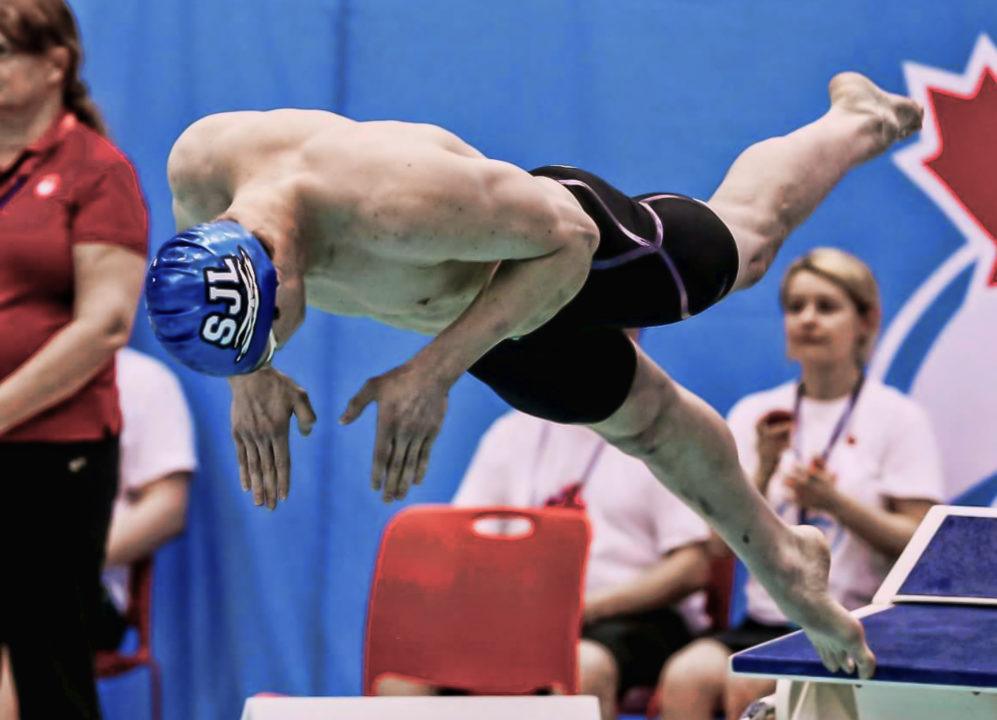 Entering the 2018-2019 season, the TCU swimming and diving team features 14 new athletes, including two international athletes and 12 from across the country. Current photo via TCU Athletics

FORT WORTH, Texas – Entering the 2018-2019 season, the TCU swimming and diving team features 14 new athletes, including two international athletes and 12 from across the country.

“First and foremost, I want to show appreciation for the work done by the former and current staffs in their efforts to complete this class,” head coach James Winchester said. “I believe this class brings a lot of depth to our team, can contribute at the Big 12 level early, and has some potential to eventually compete at the national level. As a program, we’re aiming to grow quickly, make progress at the Big 12 level, and knock on the door of the national level. With this class and the athletes we have returning, I believe we have the chance to do some special things.”

Jackson Boersma (Ruston High School – Ruston, La.)
Boersma comes to TCU from Ruston, La., as a sprint freestyler. Boersma had a productive summer, reaching the 50 and 100 free finals at the NCSA Junior National Championships. At the state level, he was a five-time Louisiana 13 & Over State champion, and a six-time finalist. Over the course of his high school career, he earned two USA Swimming Scholastic All-America honors.

“Jackson had an outstanding senior season, and just concluded racing this summer by being a finalist at the NCSA Junior National Championships,” James Winchester said. “From my conversations with Jackson so far, he is someone who truly appreciates everything TCU has to offer. I’m really excited to work with him and see what he can do.”

Michael Chwaluk (Kentlake High School – Covington, Wash.)
Chwaluk comes to TCU from the Pacific Northwest, where he had success at the regional and state levels. At the Pacific Northwest Long Course championships, he reached the finals in the 200 and 400 free. During his senior season, he earned two silver medals at the Washington Short Course championships, finishing second in the 200 free and 200 fly. At the start of his senior year, he was named an USA Swimming Scholastic All-American.

“Michael is another excellent addition to our program,” Winchester said. “We’ve had some success with student-athletes coming out of the Pacific Northwest before, and we’re looking forward to continuing that tradition with Michael. He’s going to add some great depth for us in the fly events and we see him being an immediate contributor at the Big 12 Championships.”

“Really excited to bring Noah on board, his background is one where he’s had solid amount of development but coming out of Newfoundland, he’s had his challenges trying to get enough competition beyond the national level,” Winchester said. “As a member of the Canadian junior national team, he will be heading to the Jr. Pan Pacs championships in Fiji this coming week. We’re looking forward to him bringing that experience to TCU and developing into potentially one of the better sprinters at the NCAA level.”

Reed Dittlinger (Dimond High School – Anchorage, Alaska)
Dittlinger comes to TCU from Dimond High School multi-time, multi-event Alaska state finalist. Over the course of his high school career, Dittlinger won two Alaska state titles and was an 11-time finalist. He competed at the Alaska Junior Olympic Championships where he reached the finals in six events, including a pair of runner-up finishes in the 200 free and 100 back. Dittlnger was named NISCA All-American.

“Excited to have Reed as a part of this recruiting class,” Winchester said. “He’s one of several of our incoming athletes to have a strong senior season last year, and coming out of Alaska, he has a lot of upside and potential.”

Kade Knoch (Edmond Santa Fe High School – Edmond, Okla.)
Knoch comes to TCU from Edmond, Okla., as a backstroke and mid-distance swimmer and the third highest ranked recruit in Oklahoma. During the spring of his senior year, Knoch won a pair of events at the Speedo Champions Series, winning the 200 back and 200 fly. As a junior, Knoch won the 200 back state championship with a mark of 1:55.21, while earning silver in the 200 fly and 200 free.

“Kade is one of the top recruits coming out of Oklahoma this year and brings a lot of diversity to our program,” Winchester said. “Kade has had a lot of success recently including Speedo Series Sectional champion this past spring. Kade has a chance to make a difference in our program early on and we look forward to seeing him contributing early.”

“Hugh had great development his senior season,” Winchester said. “Huge will add a lot of depth to our breaststroke and will have the opportunity to continue developing early on here at TCU. Getting to know Hugh through the process, I feel like he’s a great fit and will add a lot to our culture.”

Isabella Ashdown (Western Sydney University – Sydney, Australia)
Ashdown comes to TCU from Sydney, Australia, where she competed on the national and international levels. She was a finalist at the Elite Australian Nationals in the one meter, and was a member of Australia’s team for the Gold Coast Commonwealth Games.

“Izzy is an elite springboard diver coming from Australia and is strong, smart, and exciting to work with,” head diving coach Anthony Crowder said. “She has some international experience and has competed with Australia’s best. Izzy will have a large impact on our success at the Big 12 Championships and postseason meets.”

Claire Banic (Cosby High School – Midlothian, Va.)
Banic comes to TCU from Midlothian, Va., where she swam for the Westerleigh Warriors Swim Team. The Cosby High graduate had a productive spring, winning a regional title in the 100 back and reaching the Virginia state finals in the 50 free and 100 back.

“Claire is one of our several Virginia area athletes making her way down to Texas,” Winchester said. “She had a breakout spring and has an opportunity here to grow and develop into a contributor.”

“Really excited to bring Cassidy on board,” Winchester said. “Great personality, really looking forward to what she can bring to the team. She’ll bring depth to our sprinting core.”

Connie Deighton (Bullers Wood School for Girls – London, England)
Deighton comes to TCU from London, England, where she competed in international diving. In 2017, she was the one meter English Age Group National Champion and runner-up in the three-meter. She was a finalist at the 2017 Open Croatian Summer Champs.

“Connie brings international competition experience that will translate directly into strong performances at Big 12 Championships and postseason meets,” Crowder said. “She has a strong work ethic and passion for the sport and the Horned Frog family. She will be an immediate contributor to our culture and success.”

Lauren Mabie (Saint Marys Episcopal School – Memphis, Tenn.)
Mabie comes to TCU as a versatile swimmer out of Saint Mary’s Episcopal school. A 2017 NISCA All-American, Mabie is a five-time Tennessee State finalist. In 2017, Mabie earned a pair of runner-up finishes in the 100 breast and 200 IM.

“Very diverse, she can do everything,” Winchester said. “Lauren is one of our high-profile recruits coming and with her event range, she will add a lot of diversity to our team. She’s great at all four strokes, great at the IM, and she will add a lot to each event in a dual meet lineup. We’re excited to see what she can do at the Big 12 level.”

Sarah Malloy (Mills E Godwin High School – Richmond, Va.)
Malloy comes to TCU from Mills E. Godwin High School, where she was a sprint freestyler and swam the fly. She’s a four-time Virginia state finalist and during her senior year, reached the NCSA Spring Junior Championships. In 2017, she was named a USA Swimming Scholastic All-American. She brings a 23.89 50 free time, as well as a 58.88 200 free, and a 56.86 100 fly.

“I’ve been watching Sarah for a few years now, going back to when I was at GW,” Winchester said. “I was disappointed to not get her to GW, but I’m really excited to get to work with her here at TCU. As a NCSA junior national qualifier, she has experience at the national level, which will serve her well as we look to develop her.”

“I got to watch Megan have a breakout summer these past few months,” Winchester said. “She qualified for junior nationals and performed well at the Speedo futures championships. One of our goals here at TCU is to keep talent close to home, and Megan is a part of a successful Lakeside Swim Club here in the DFW area. Megan brings a lot of diversity to the program with her event lineup and we’re excited to see her develop into a contributor at the Big 12 level.”

Emily Visagie (Our Lady of Fatima Convent School – Durban, South Africa)
Visagie comes to TCU from Durban, South Africa, where she has competed internationally. At the end of the summer, Visagie qualified for the World Short Course Championships. She’s a multi-time finalist at the South Africa National Aquatic Championship and is a two-time South African Short Course Swimming champion in the 100 and 200 breast. A member of the South African Swimming Federation and several swimming clubs, Visagie brings marks of 1:11.46 and 2:33.11 in the 100 L and 200 L breast respectively.

“Emily is a world-class recruit and we’re really excited to have her on board at TCU,” Winchester said. “As a member of the South Africa national team, she brings international experience. She was also a Commonwealth Games finalist this last spring, and just last week qualified for the World Short course Championships in China. She’s one of the top breast-strokers coming into the NCAA this year and has a legitimate chance of qualifying for the NCAA Championships. What impresses me more about Emily apart from her athletic abilities is that as we went through the process is that she is very detail-oriented on being a part of a good culture and is excited about the opportunity for growth.