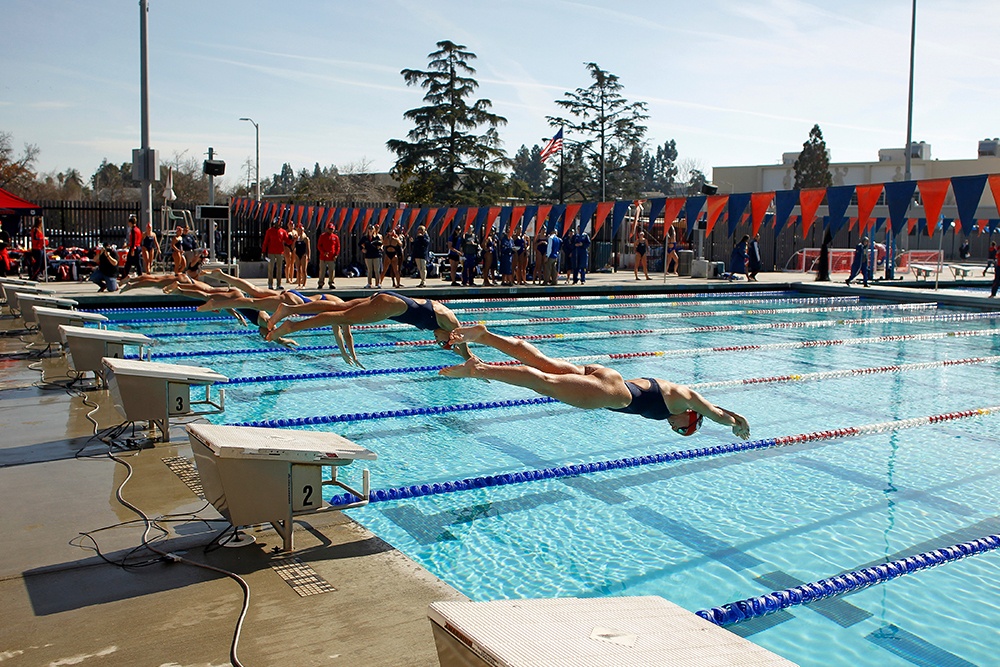 This year’s Chick-Fil-A Invitational will feature two Pac-12 teams as well as three other MW programs. Cal will take part in the meet for the second consecutive season and the ‘Dogs will also be joined by Washington State, San Diego State, San Jose State, and Air Force to open the season.

“We’re excited,” head coach Jeanne Fleck said. “We’ve mixing things up a little bit more this year with Cal and Washington State and Air Force coming out. It should be fun to have some new teams and its always a great way to start the season.”

The ‘Dogs are scheduled to host three other dual meets during the season, welcoming Nevada on Oct. 27, hosting both Fresno Pacific and Pamona-Pitzer on Nov. 3, and facing UC Davis in the Aquatics Center on Jan. 19.

Following the Chick-Fil-A Invitational, the ‘Dogs will take part in two meets in Bakersfield, with a sprint event on Oct. 19 and the Roadrunner Invite the following day. The Bulldog divers will compete at USC Nov. 9-11 and the team will have a dual at Pacific on Nov. 17 before heading to Las Vegas for the UNLV Invitational Nov. 30-Dec. 2.

“The Bakersfield Invite will be early in the season and a lot of swimming,” Fleck said. “Its two separate meets and we’ll see some different teams that we aren’t used to seeing. The UNLV Invitational is later than usual but I like a little bit of change.”

Fresno State will have road duals at CSU Bakersfield (Dec. 8), San Diego State (Jan. 11), and San Diego (Jan. 12) before the home meet vs. UC Davis. The ‘Dogs are scheduled to close the regular season at San Jose State on Feb. 2, but if the Spartans’ new pool is not completed the meet would be moved to Fresno.

The MW Swimming & Diving Championship moves to Minneapolis, Minn. this year and will take place Feb. 20-23. The NCAA Zone Diving meet will be March 8-10 in Flagstaff, Ariz. The National Invitational Championship and NCAA Championship are the following two weeks, respectively.

“We have a very young team,” Fleck said. “We have nine newcomers and we only graduated four so our team is a little bigger this year, which is exciting. We have more depth than we’ve had. We’ve got some great stars with people to back them up, and we’re especially strong in the stroke events. We always have some newcomers who end up having a big impact so it will be fun to see who that’s going to be this year.”