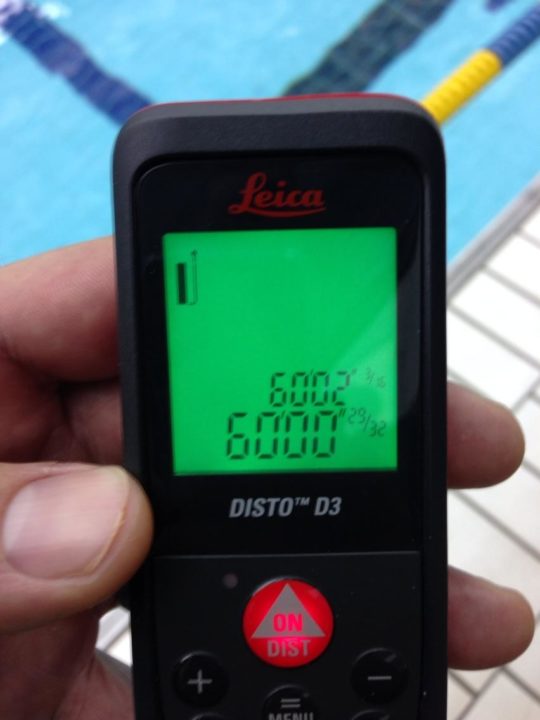 Measured to confirm the records, Michigan and Eastern Michigan took part in a very unique dual meet on Friday.

The last time we saw records go down in a 20-yard pool, swimming was very different. Underwaters were almost irrelevant, training and racing technique was much more rudimentary, there were no goggles, the suits were nowhere near what we see today, and mustaches were common-sight at big competitions.

Well, actually, the last of those things seems to be coming back in style.

This meet was an absolute blood-bath on the American Record book (see more about the records here). Not every event swum on Friday was listed in the 1967 AAU Record book, the last time American Records were published for a 20-yard course, but everyone that was saw a new record.

An illustration of how close the 15-meter lines were to the turn. Consider that athletes could actually pop up inside of the far flags , legally.

That started with Ryan Feeley winning the men’s 500 free in 4:27.55. With the extra walls (25% extra, to be precise), I think many expected that time to be a bit faster; One would have expected a 4:27 from Feeley even in a race of the same distance but in a 25-yard pool at this point of the year. Perhaps there is an effect on the athletes of not being super-familiar with the distance and the timing of the super-short pool.

After another Michigan Record from Kyle Whitaker in the 100 breaststroke (54.21). the Eastern Michigan Eagles got in on the record-breaking action. There, All-American Jacob Hanson won in 1:45.82, which broke the old American Record by almost 20 seconds. This was very much a race of an EMU strength on a Michigan weakness, as the Wolverines don’t have much going in their 200 backstroking group this season.

Again, without much context, the Michigan 100 butterfliers had what would seem to be a splendid performance in the 100 fly. There, John Wojciechowski won in 47.81, followed by freshman Dylan Bosch in 48.02. Wojciechowski was recently in a motorcycle accident that left him with a good mark on his back, but he seems to be performing well despite. Bosch, a South African, has shown good propensity in short course thus far in his career (though mostly in 25-meter short course), so this is a meet made for him.

Bosch would have a really great swim in the 200 fly, winning in 1:46.78 – about 6 seconds ahead of his teammate Whitaker. Whitaker gets the credit for the American Record, though, in 1:52.26.

The 15-meter underwater rule that we see today (though it didn’t exist in 1967) was in effect for this meet, resulting in some almost comically-brief swims. For example, Sean Fletcher won the 40 backstroke in 17.29 – taking only 10 total strokes (really, it could have been even fewer).

Michael Wynalda took down what was probably the most legendary name that was being chased-after in this meet, as he broke Don Schollander’s 1965 mark in the 200 yard free. Wynalda swam a 1:36.06, whereas Schollander’s old mark was 1:44.1. Schollander was a king in the pool in the early 60’s just before Mark Spitz’s explosion at the 1968 Olympics that really popularized the sport: he was a four-time gold medalist at the 1964 Tokyo Games.

Hanson got a second record for Eastern Michigan in the last eligible event of the meet with a 48.93 in the 100 backstroke; he was only 2nd-place, but again Michigan’s Miguel Ortiz (47.81) is not an American. That made the final tally 3 American Records for Eastern Michigan and 6 for Michigan. The final score was lopsided in favor of the Wolverines, but that’s not what this meet was about. This was another great example of Mike Bottom putting his creativity to use and creating a new format that got the swimming community excited.

A full list of all broken records can be seen below. Full meet results available here.

Credit Bottom with keeping it fun during the dog days of training.

By the way, did the American record for the 160 yard Gatorade chug relay go down? Just me asking.

“This was very much a race of an EMU strength on a Michigan weakness, as the Wolverines don’t have much going in their 200 backstroking group this season.”

Did that comment really need to be added? Yes, It may be true but why downplay a team that is obviously very much the underdog? Let them have what glory they could find in this meet.