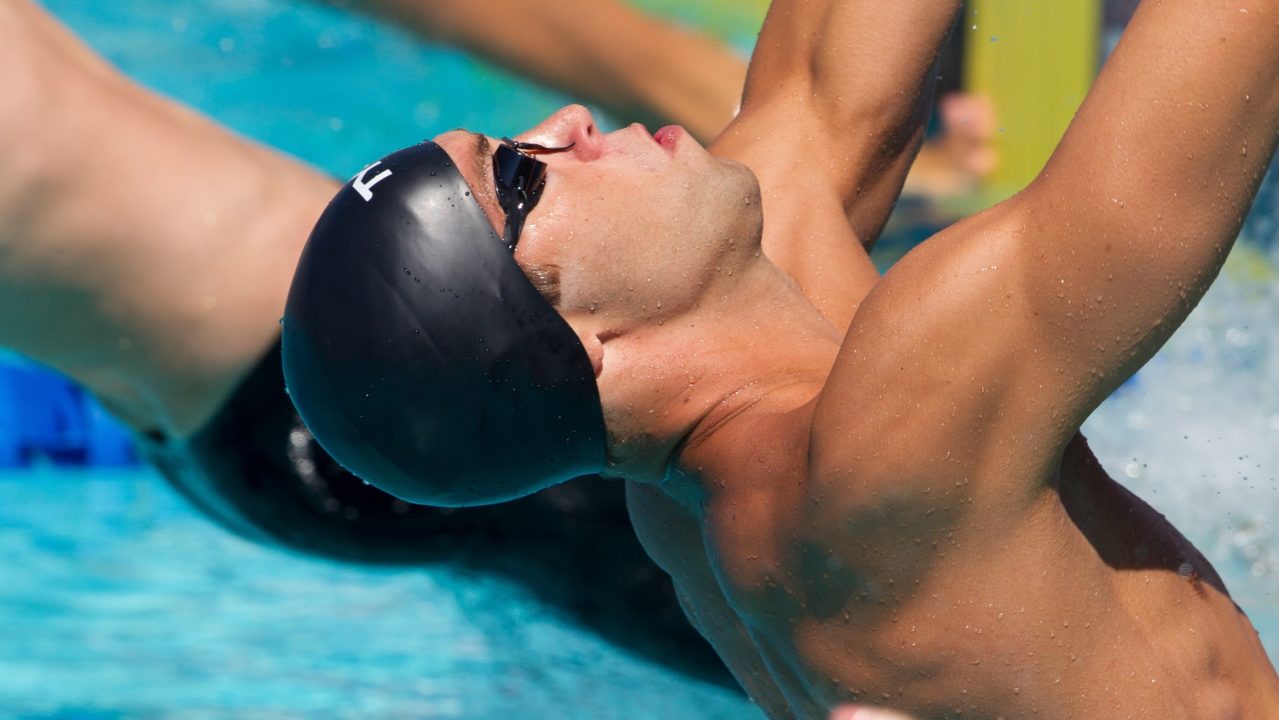 Matt Grevers will lead a talented group of backstrokers at the Austin Grand Prix, but there won't be many of his fellow competitors there to see it. (Photo Courtesy: ©Tim Binning/TheSwimPictures.com)

The Austin Grand Prix psych sheets were released today, and if USA Swimming’s goal by ramping up standards were to limit the meets to a truly elite competition, then they got exactly what they wanted.

The entry lists for the 2013 edition of this meet, the first swum actively with the new prize money, are among the briefest you’ve ever seen for a USA Swimming meet. Out of 29 individual events, fewer than half (14) will be able to fill a full slate of A-B-C finals (meaning, 24 or more entries). There are two events (the women’s 200 breaststroke and the women’s 800 free) that won’t even see full A-finals.

When the new standards first came out, there were fans on both sides of the aisle. Some saw creating an elite atmosphere as a good thing that would help bolster the popularity of the sport; others thought that it was taking away valuable experience from the younger tier of the sport. I don’t think anybody wanted to see 7 swimmers entered in the women’s 200 breaststroker, however.

The list of those who are coming, however, is packed thick with elite swimmers. That includes names like Matt Grevers, Eugene Godsoe, and Arkady Vyatchanin in the 100 backstroke – which should be the race of the meet given how well Godsoe has been swimming as of late.

There are quite a few Canadians coming down for the chance at prize money. That includes Olympic silver medalist Ryan Cochrane, though he’s not entered in the 1500 and will instead swim just the 200 and 400 freestyles plus the 200 backstroke. It’s sort-of too bad that he’s not taking on the metric mile, because with Chad La Tourette, Michael Klueh, Michael McBroom, and Mads Glaesner that’s a really good field as well.

Chloe Sutton will be attending and taking on the middle-distance and distance freestyles. She’ll race against the likes of Kate Ziegler, Barbara Jardin, Andreina Pinto, Ashley Twichell, and Leah Stevens, among others, in what is probably the deepest specialty entered in this meet.

The men’s breaststrokes could be really good, led by American Olympian Clark Burckle. Glenn Snyders, a New Zealand Record holder, will be up for the event, as well another American Mike Alexandrov. Former Stanford Cardinal BJ Johnson, former Texas Longhorn Christian Schurr now representing Mexico, and open water Olympic champion Ous Mellouli will challenge for breaststroke medals as well. Mellouli’s schedule seems to have him focusing more on the IM’s, as he’s swimming the 200 breast, the 200 fly, and the 400 IM, but not a single freestyle event where all of his Olympic success has come from.

Teenage sensation Allie Szekely from Central Bucks in Pennsylvania is the headliner of the women’s breaststroke races.

In the men’s sprint freestyles, we’ll see the renewal of a rivalry, in a college facility, between USA Swimming’s new heartthrob Nathan Adrian and Texas’ Jimmy Feigen. The Longhorns will gang up on Adrian a little bit, as Garrett Weber-Gale and Ricky Berens will be entered (though interestingly no Dax Hill). Anthony Ervin, Conor Dwyer, and Canadians Tommy Gossland and Luke Peddie will also be there.

And it wouldn’t be a Grand Prix meet without Mr. Fan-friendly Ryan Lochte showing up to swim a few races and sign a few autographs. He’s swimming the 50, 100, and 200 freestyles, the 100 fly, the 100 breast, and the 200 IM. After getting beat in his last two major 200 backstrokes in a row (Short Course Worlds and the Olympics), it would seem as though Lochte is pushing himself even further toward the butterfly races where he’s come close to breaking into the world’s podium.

The swimming begins on Friday, January 18th, and will be live streamed here. Certain sessions will also be available live on Universal Sports.

What a powerhouse meet to start 2013 ! Wowwwwwwwwww
So many great names for great races . Owesome