5 Storylines to Follow at the 2021 Pro Swim Series – Richmond 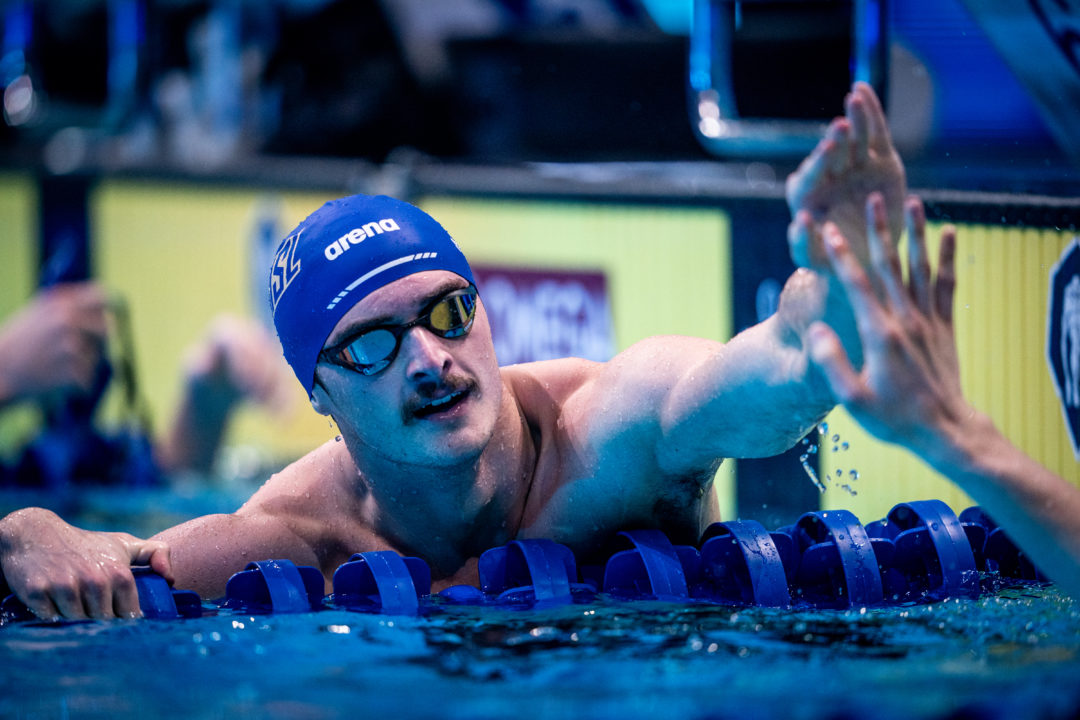 In November, Claire Curzan rocked a 56.6 100m fly. She went 50.1/1:49 in the SCY backstrokes in December. What's next? Current photo via Mine Kasapoglu

The Pro Swim Series is back for the first time since March 2020, around the beginning of the United States’ COVID-19 pandemic. Many of the country’s top swimmers will be racing at one of two sites for the first 2021 PSS stop, one in Richmond, Va., and one in San Antonio, Tx., with the moved-back Olympic Trials less than half a year away.

Below, check out five of the top storylines to follow at the Richmond site this week (in no particular order).

Claire Curzan has been leaving NAG records in her wake for several years now, and while her LCM ability has also progressed, she made it to international medal threat level speed at the end of 2020. Throwing down a 56.61 100m fly at the Greensboro site of the virtual 2020 U.S. Open, the 16-year-old shot to the #3 performer slot in U.S. history.

She’s the fastest American in this event since Kelsi Dahlia went 56.41 at the 2018 Pan Pac Championships.

Dahlia hasn’t broken 57 seconds in this race since that swim in 2018, making Curzan a favorite to take over duties as America’s top butterflier, a role Dahlia has more-or-less held since former World Record-holder Dana Vollmer‘s peak years.

#2 THE FINAL YEAR OF RYAN LOCHTE?

Four-time Olympian and World Record-holder Ryan Lochte has been on a redemption tour, of sorts, since the 2016 Rio Olympics and his infamous gas station incident. Since then, he’s gotten married, had two children, faced another suspension in 2018 for having a prohibited IV infusion and gotten almost a half-decade older.

The postponement of the 2020 Olympics wasn’t what Lochte, 36, initially had in mind. But, despite it all, he’s dead-set on making the 2021 Tokyo Olympics, which would be his fifth Games. Finally, Lochte’s 2021 has arrived.

Lochte hasn’t put down any impressive swims in quite some time, but training under Gregg Troy‘s notorious distance-heavy workload, he’s never really been that fast in-season. Regardless of whether he makes the 2021 Olympic team, this feels like Lochte’s last chace at the big stage; 2021 could be the last year of Lochte.

While the men’s 100 fly looks like Caeleb Dressel and Maxime Rooney‘s Olympic spots to give up, the 200 fly is far more open.

Entered in the 200 fly this week in Richmond are World Champs participants Justin Wright and Jack Conger and National Team-er Jack Saunderson. Wright and Conger represented Team USA at different Worlds in the 200 fly; Wright competed in 2019, placing 18th in prelims and just missing semifinals, while Conger reached the final in 2017 and placed fifth. Conger also made the team in 2019, albeit in the 100 fly, where he made semifinals and touched 11th overall.

There’s still a chance for Conger and Saunderson, Olympic team-wise, in the 100 fly; they were both 51-low in 2019, and they’re two of the strongest contenders to unseat Rooney. Still, the 200 is the more open event, with Georgia freshman Luca Urlando the favorite for the win and a slew of guys between 1:54-1:56 behind.

A handful of emerging distance free talents on the women’s side will come together this week in Richmond. Two of the bigger names from the last few months are New York standouts: Long Island Aquatic Club’s Cavan Gormsen, 15, and Westchester Aquatic Club’s Claire Weinstein, 13.

Gormsen really set herself apart in December at a LIAC-hosted meet, blasting a 15:58.97 in the 1650 free and a 4:38.45 in the 500 free. Weinstein, the youngest swimmer at this meet, has hit best times left and right since the fall season started, and a highlight came at a virtual U.S. Winter 18 & Under Championships site in December, where she dropped over 20 seconds from her old best to hit a 9:43.75 in the 1000 free.

Teammates while at NC State collegiately and now as part of their pro group, Justin Ress and Coleman Stewart are two big contenders for a 100 back spot on the 2021 Olympic Team. The pair were teammates on a third team, the Cali Condors, during the 2020 International Swimming League season, though Stewart’s name was a bit more glued to headlines.

Aside from a brief spat with LA Current’s Ryan Murphy during the ISL season, Stewart’s swimming spoke for itself: he posted a 49.62 in the 100 SCM back, making him the fifth-best American performer ever and #15 all-time in the world. Ress, meanwhile, was a bit more focused on sprint free this past ISL season.

As far as Olympic spots go, Murphy looks like a lock for one, while Shaine Casas and veteran Matt Grevers have both been 52-point since 2019 and Jacob Pebley hit a 52.9 in 2016. Ress and Stewart are still in it, but they’ll need to find their way into 52-second territory to have a shot.

Is that Claire Curzan in the photo?

Good luck to all swimmers and Olympian this weekend . I hope people are followed Covid rules . From the looks of this thread, a lot of great swimmers have scratched. Covid and the new strand is serous.

Which Claire ? I hear West had some Covid cases and has to quarantine . Is this so? I was looking forward to seeing her swim.

Curzan. The #1 story to watch

Bummer , I just saw Alexa Reyna scratched as well. It’s always exciting to see kids from that team compete . That Covid really did a number on that team. I just heard they had to quarantine their senior team because two swimmers tested positive last week. Many of us were rooting for Weinstein/Reyna. It’s refreshing to see that coach Carle follows the quarantine rules .

You clearly have a lot of “insider” information but it is incorrect. There was a swimmer that tested positive and the swimmers in contact with her were all told to test and quarantine. That case did not affect Claire or Alexa. Claire is at the meet and we’re excited to watch her race. Alexa just got back from a big meet in France- her scratch at this meet has nothing to do with Covid. Good luck to all the swimmers this weekend!