Florida Gulf Coast Women Back In Action Wednesday Against Miami 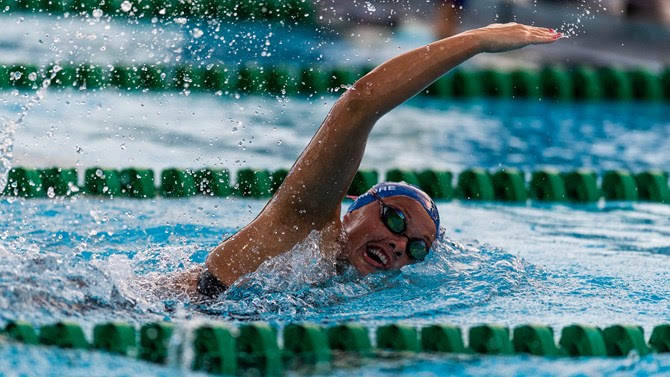 The Eagles head into the meet looking for their first dual win of the season, having already captured November's FGCU Invitational. Archive photo via FGCU Athletics

FORT MYERS, Fla. – The FGCU swimming & diving team (0-0, 0-0 CCSA) is set to host its first meet of the new year, as it will take on the Miami Hurricanes (1-1, 0-0 ACC) this Wednesday, Jan. 13 at 3 p.m. at the FGCU Aquatics Complex. The meet will be open to the public, though attendance will be capped at 50 spectators. All attendees are required to wear masks at all times and must adhere to CDC guidelines, which include social distancing. The action will also be streamed on Facebook Live for those who cannot attend.

The meet against the Hurricanes will be the Eagles’ first since the FGCU Invitational, which was held at The Nest back in November. After three days of competition, FGCU emerged with 1420 team points, downing both second-place FIU (994) and third-place Georgia Southern (712). The Green & Blue’s performance during the meet earned the team a sixth-place ranking on CollegeSwimming.com’s Mid-Major list.

In addition to the excitement from the win, the season-opening event was also highlighted by senior Petra Halmai‘s (Dombovar, Hungary/Lanczos Kornel Secondari Grammar School) record-breaking performance in the 100 Breast. The Hungary native’s 59.89 stands as both a program record and an NCAA ‘B’ Cut time. More recently, Halmai continued her pursuit of earning a spot at the Olympics by winning the 100-meter breaststroke at the Hungarian National Championship. Her victory, as well as a pair of second-place finishes in both the 50- and 200-meter breaststroke events, earned her a spot on the European Championship Team, as well as a provisional spot on the Olympic squad.

Despite the team having just one event under its belt, Halmai is not the only Eagle that has swam an NCAA ‘B’ Cut time thus far as junior Wiktoria Czarnecka‘s (Lublin, Poland/Liceum NR 10 W Lublinie) time of 22.66 in the FGCU Invitational’s 50 Free also surpassed the aforementioned mark. Additionally, the trio of sophomores Reese Wakefield (Guelph, Ontario/Bishop Macdonelle CHS), Delaney Nelson (Cincinnati, Ohio/Ursuline Academy) and Alyssa Schmidt (Winter Park, Fla./Winter Park HS) have each recorded NCAA Zone-qualifying scores on the 1m board.

Wednesday’s meet will also be the first of 2021 for the Hurricanes, who competed twice before the winter break. Miami opened up its slate with a road contest against the Florida Gators and dropped a 190-94 decision. The team then bounced back with a 946-892 win over Vanderbilt after three days of competition against the Commodores.

Miami has a lot of experience on its side this year, as only four freshmen joined the team. The veteran presence makes the squad fairly similar to the one that picked up the win in last year’s meeting between the Hurricanes and the Eagles, but the overall history between the sides favors FGCU 8-4.