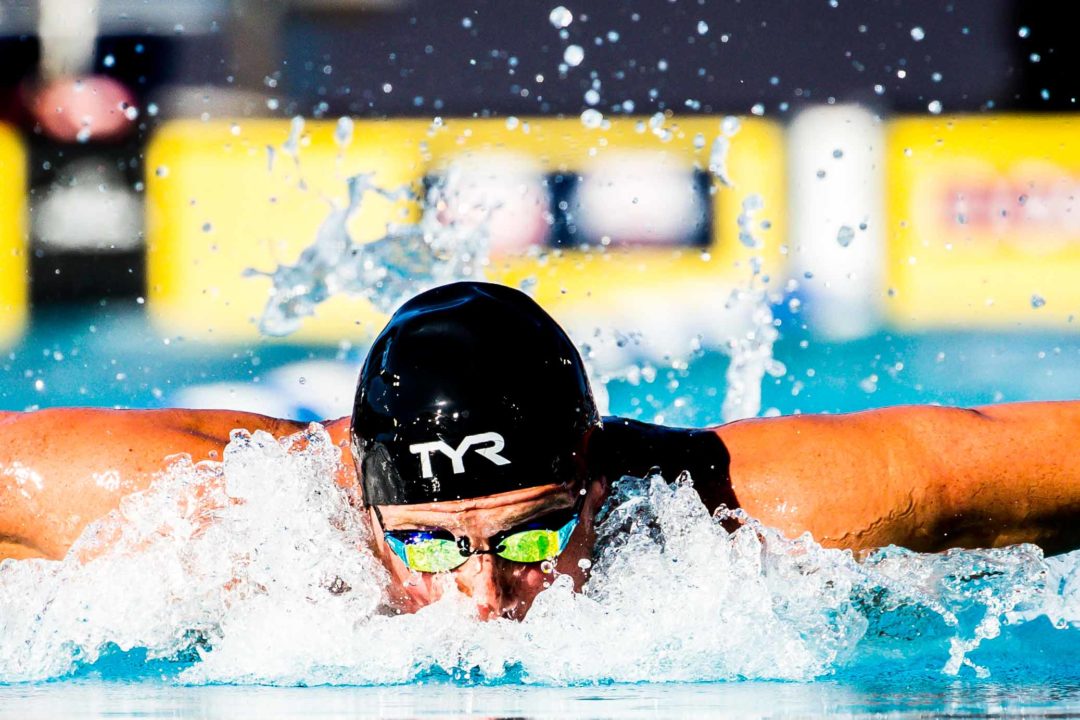 In four previous Trials, Lochte has never swam less than five events, and he competed in six events in both 2004 and 2008. Archive photo via Jack Spitser/Spitser Photography

Even at the age of 36, well past the time when most elite swimmers hang up the suit and goggles, Ryan Lochte is still training with his eye on a grueling five event for the 2021 Olympic Trials, a schedule that could conceivably result in 14 swims in seven days.

Speaking with our very own Mel Stewart in the latest Gold Medal Minute, Lochte revealed that right now, he’s planning on swimming the 200 IM, 400 IM, 200 free, 200 back, and 100 fly at next summer’s Trials. That’s similar to schedule he swam in 2016, where he swam five events, as many as any other male swimmer, but where he swam the 100 free instead of the 200 back.

While that’s a pretty tough schedule, no matter how old a swimmer is, Lochte has always embraced a full Trials schedule, usually in the toughest events. Here’s a quick look how the 2021 event lineup Lochte mentioned to Mel compares to his four previous Trials lineups, going back to 2004 when he was just 19.

In four previous Trials, Lochte has never swam less than five events, although he didn’t necessarily swim all two or three rounds in each event each year. He swam five events in 2004, including the 1500 (he was the SEC Champion in the 1650 the year before as a freshman). He added then dropped the 1500 and added in the backstrokes for 2008. In 2012, he dropped the 100 back and went after a 100 fly spot, finishing 3rd, before dropping the 200 back, an event in which he was previously the world record holder, for 2016.

There’s no doubt he’s been putting in the work, and nine years later, no one has broken his world record in the 200 IM, and he won that event at Nationals last year. Still, he’ll be just shy of 37 next June, and you have to wonder about that 200 back/200 IM/100 fly triple, so no matter what he’s saying now, it wouldn’t be surprising if he and Gregg Troy tweak that event schedule as we get closer to Trials.

You’ve also got to wonder a bit about the 400 IM. Sure, he says that Troy has been training for him for it, but he hasn’t been faster than 4:15 since the 2016 Trials, where he tweaked his groin on that first day, possibly affecting the rest of his meet. Additionally, there’s not a super clear path in that event, where 13 US swimmers have been faster than him since Trials, including veterans like Chase Kalisz and Jay Litherland, as well as younger guys ranging from Charlie Swanson to Carson Foster.

The 200 free might be an easier path for him, since the top four finishers are guaranteed to make the team, and the top six usually go, but again, it’s a super-crowded event for the USA right now, with probably 12-15 guys who have a legitimate shot, and Lochte hasn’t broken 1:50 since 2016.

Likewise, both the 200 back and the 100 fly have established stars (Ryan Murphy, Caeleb Dressel) penciled in for a spot, and a bevy of younger stars (Shaine Casas, Maxime Rooney) gunning for those second spots. Especially he drops the 200 back, the 200 IM is probably his best shot at this point. No one has broken his world record from 2011, he has the 6th-fastest time among US men this quad/quint, and as our GMM points out, he won the 200 IM at Nationals last summer when he still wasn’t in great shape.

No one know what lies ahead between now and Trials, whether we’re talking about a global pandemic or the training and health of an accomplished 36 year-old swimmer who’s trying to defy common wisdom about aging swimmers taking on grueling schedules. But, assuming Trials happen and assuming Lochte is able keep training like he says he’s been, it’ll be fun to watch him go for it, and in the meantime, we get to have fun speculating.

Love the Podcast. Keep it up. “Having Fun” is such an important lesson for swimmers at all ages.

Im thinking he should really drop the 2 back. He should really focus on his best chance (2IM) on June 18 instead of having to do the 2 back before. The 2 back is also stacked for America.1fly really wouldnt matter because it is after the 2IM and wont really effect his 2 IM.

I’d just like to point out that Lochte scratched most of the events he entered in 2016. Imo he should and hopefully will do just 200 free and 200 IM. 200 IM is his only realistic shot to make the team individually, and he can use the 200 free to warm up for that, plus potentially make a relay leg

I find it a little odd that Locthe never really gave the 100 backstroke a more serious look. I wonder whether things would’ve taken a different turn if he edged out Grevers in the 2008 Olympic Trials, rather than the other way round.

I have no doubt it would have. Also if Phelps got the world record in the summer of 2007 it might have been different (I think he could have won in 2008).

I think phelps could have won the 100 back but medaling in the 100 free would have been a stretch. 400 free…who knows…

Phelps’ 47.51 lead split from the 4×100 FR would have been good enough for bronze in the individual 100, so I think he certainly could have medaled in the 100 free. 400 free is interesting though. I’m guessing he could have medaled if he really wanted to, but he so rarely competed in the event it is hard to know for sure.

I don’t think the 400 free was ever an event he really trained for, he tried it at a worlds championship once I believe and didnt make it to the final

He definitely won the 400 free at nationals one year, the year it was in Maryland. (I can’t remember the year but was in the audience.) I believe if he really wanted to train for it, he would have been great at it.

Phelps definitely could have won the 400 FR in 08. He was so far ahead of Park in the 200, and his 400IM showed how well he could hold on in a longer race. I think he could have been sub 3:40 with the full body LZR if they focused on that instead of the 4IM.

That 47.51 he swam as a relay lead off in Beijing was .01 off the WR that Eamon Sullivan broke in the same lead off. It was also faster than the 47.67 for bronze in the individual 100 in Beijing. I know I’m splitting hairs here, but I don’t think his 100 free chances would’ve been a stretch.

I hope he makes the team!

Also, Hot take: I think they should let him swim in the ISL. His violation doesn’t really fit the spirit of the rule in my opinion. Unless there’s something I’m not getting.

Rio 2016 issues might also be a factor, may be what you are “not getting”.

I think Father Time has caught up with him

The hard line may or may not be their moral judgment, but I’m certain their lawyers have told them that they’re not allowed to do any “what abouts.”

Agreed. His best shot at that triple crown was back in 2012 when the second spot for the 100 fly was much more open than it is now (and him 9 years older). He should put all his effort in the IMs and maybe the 200 free for a relay spot but that’s even a far stretch now given how fast so many people went on 2019. I would rule out the 400IM except nobody has looked all that strong in it for us over the last few years.

I mean, we did win gold and silver at the last two worlds in the 4im.