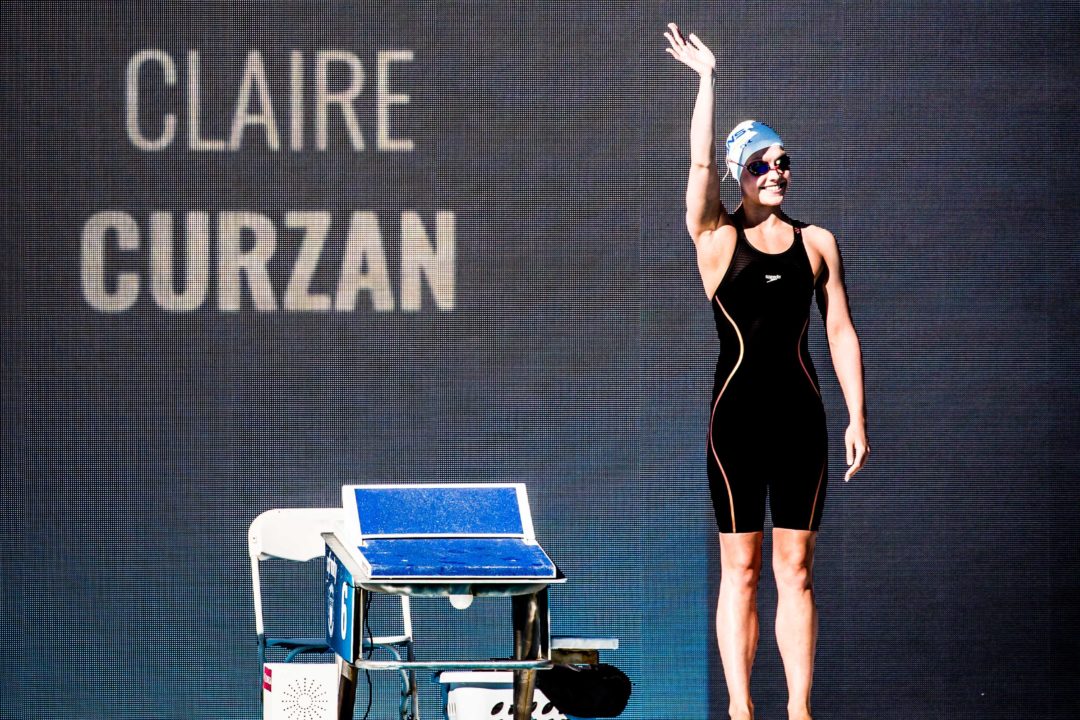 And since Regan Smith jumped straight from 1:50 to 1:48, Curzan technically becomes the first 16 year-old girl ever to swim a 1:49 in the 200 back. Archive photo via Jack Spitser/Spitser Photography

Claire Curzan closed out the TAC Titans Blizzard Blitz with a blitz of her own, moving up to #2 all-time among 15-16 girls in the 200 back with a big lifetime best and rattling her lifetime best in another event tonight.

Curzan returned just a few heats later to swim the 100 free, and despite the tight turnaround, she won by over second with a time of 47.51, just 0.28s away from her personal best of 47.23.

While this was primarily a meet for the 18 and under crowd, TAC has a few older swimmers who’ve swum here as well, and tonight, 31 year-old veteran Ashley Twichell won the 500 free with a time of 4:39.85, after going 4:39.52 in prelims. Today marked the first time Twichell has been under 4:40 since 2017, and those times are her 3rd- and 6th-fastest ever. Twichell only competed in one other event this week, the 1000 free, which she won on Thursday.

The runner-up behind Twichell both Thursday and tonight was 17 year-old Caroline Pennington of TAC. Pennington, a UVA commit, hit a three-second lifetime best today in the 500 free, coming in with a best of 4:46.76 and swimming a 4:43.97 in prelims before hitting in 4:43.46 in finals.

Michael Cotter and Lance Norris have been the big name on the boys’ side all week, and they both wrapped up the meets with big wins today.

Cotter knocked nearly two seconds off of his lifetime best today as he won the 200 IM in 1:46.52. Cotter earned victories, and lifetime bests, earlier this meet in the 200 free and the 50 free. Cotter dominated this event tonight, winning by over five seconds, with no one else finishing under 1:51.

UVA commit Braeden Haughey closed out the meet with a 4:25.76 victory in the 500 free. Haughey took 2nd to Norris in the 1000 free, 400 IM, and 200 back earlier this week, and he had the top prelims time in the 100 back, although we still haven’t seen final results for that event.

Times from the four-day meet will count towards USA Swimming’s 18&U Winter Championships, for those swimmers who are eligible.

I bet she goes professional instead of swimming in college. Not many talents like her

She would be huge in isl

Wow, what a stud. With elite times in three strokes, and some endurance from 200s of BK/FL, I think she could put on a great 200 IM.

Seem most studs who are good at free/fly/black never swim breaststroke. Unless your Caeleb Dressel, that dude is an exception of the exceptions…

That’s what made Seliskar so unique. To win 2IM, 2free, and 2breast at NCAAs his senior year – an event combo we’ve probably never seen before

I wonder if it’s just due to the amount of racing they would have to do and that those are their top 3 strokes, or is there something that makes breaststroke very different from the other 3 strokes which is causing them to be worse at it

Women’s 200 IM gold is also somewhat up for grabs after years of Hosszu dominance.