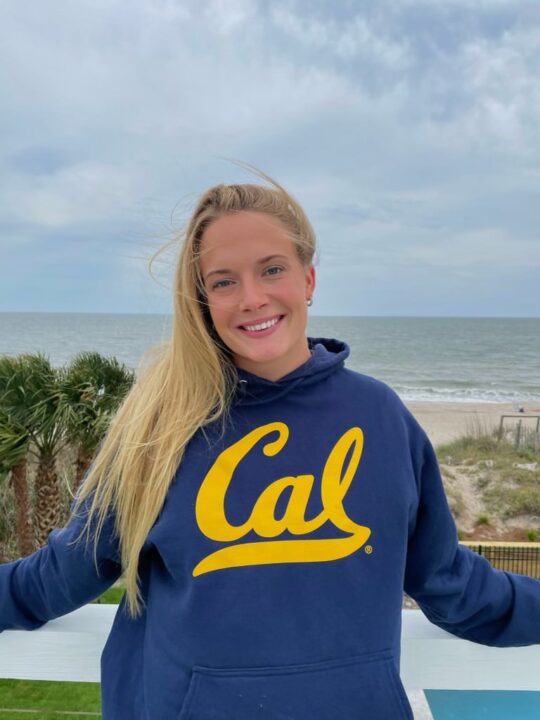 Kucheran's best time would have finished second in the 100 breaststroke at the 2022 Pac-12 Championships and provided a boost to Cal's 400 medley relay.

Nina Kucheran has announced that she will be transferring to Cal to use her 5th year of eligibility this fall.

Kucheran has the potential to make an immediate impact for Cal at the conference level. Based on her best times, Kucheran would have been second in the 100 breaststroke, sixth in the 200 breaststroke, and seventh in the 200 IM at the 2022 Pac-12 Championships. Her 100 breaststroke flat start time is also faster than the team’s 100 breaststroke relay split was on the 400 medley relay. Kucheran’s best times will provide key points for the Golden Bears. This year, Cal finished second ahead of USC by only 26 points.

She also has the potential to make an impact at the NCAA level. Her best time of 59.02 from ACCs would have made the B final in the 100 breaststroke. Her best time is also faster than the 100 breaststroke relay split on the team’s 400 medley relay from NCAAs. There, the Cal women finished 12th. The difference between Cal’s split on that relay (59.91) to Kucheran’s best time (59.02) is 0.89 seconds. This difference would have moved the relay up from 12th to 8th.

Exciting time for the Cal bears. Despite recent challenges there seems to be a great group of girls who are all striving for excellence. Will be exciting to see what Kucheran can add to this mix.

(Fingers crossed that Ivey comes back!)

Could’ve used Rajic’s 57.7 split when they got DQed

This is great news. Hopefully her history and friendship with Maggie MacNeil will make them both feel at home and ease the transition.

Later I realized this was a rather crass welcome.
I’m excited to see she chose Cal as a destination. I think she can make an immediate impact and challenge for MR breaststroke rights.
There’s a lot of movement in our sport right now and it tends to make one view it as just part of the game that is played. But it’s people’s lives and directions to their future.
I hope this move works out well for everyone involved.

Somehow don’t think she will be all that happy with the current news breaking on the Cal coach.