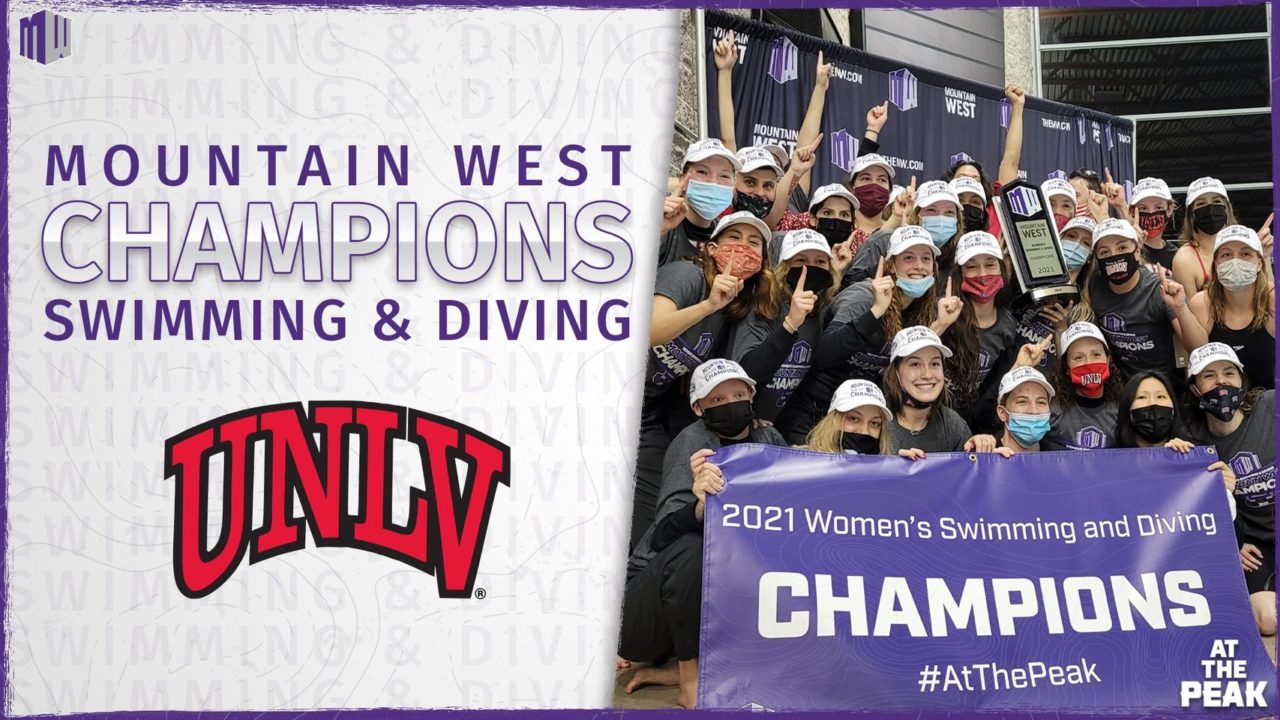 he meet, which was close from day 1, turned into an absolute nail-biter tonight, with 4 lead changes in the team standings during the final session. Current photo via Mountain West Conference

The UNLV Rebels are the 2021 Mountain West Swimming & Diving Champions, making a late charge in the team standings to earn the conference title. The meet, which was close from day 1, turned into an absolute nail-biter tonight, with 4 lead changes in the team standings during the final session.

In a true reflection of how the entire meet went, it came down to the 400 free relay, where going in, UNLV was leading Nevada by 1 point, 1285 to 1284. Two-time defending champions San Diego State were in 3rd with 1254, but with that deficit, the only way they could’ve won the meet was if both UNLV and Nevada had gotten disqualified in the relay.

The Aztecs hit the 300 mark in 3:30.44, with a considerable lead over Nevada (3:31.86) and UNLV (3:32.35), and it appeared, for about 30 more seconds, that SDSU would win the relay, and Nevada would take 2nd, making Nevada to conference champions. UNLV anchor Kristina Schneider, also the 100 free champion from earlier in the session, had other plans, cutting Nevada’s lead over UNLV to .33 seconds with 50 yards to go. Simply beating out Nevada would have been sufficient for UNLV to win these championships, but Schneider actually made up a 1.48-second deficit to San Diego State on the final 50, tearing into the wall to edge out both Nevada and San Diego State at the very end of the race.

You can watch Schneider’s epic chase-down on the final 25 in the tweet below:

Schneider split 48.74 on her swim, which was the fastest split in the field. Lauren Smith (51.05) and Malia Fernandez (50.48) were the 2nd and 3rd swimmers on the UNLV relay. Schneider’s split was significantly faster than what she swam in the individual 100 free. She won the race with a 50.09, coming in just off her 49.92 from prelims.

The Rebels had put themselves into position to contend for the Mountain West crown in the 400 free relay thanks to a stellar team performance in the final individual event: the 200 fly. Heading into the 200 fly, Nevada was leading the standings with 1237 points, SDSU was 2nd with 1204, and UNLV was back in 3rd with 1189, 48 points out of 1st. The Rebels then capitalized on a huge prelims in the 200 fly, where they had earned the top 3 finals seeds, as well as a B finalist. Nevada ultimately picked up the win in the event, with junior Julia Adamczyk coming from the 7th seed to win the race in 2:00.00. UNLV still got the job though, with Gabriella Lizzul and Teneka Ash, both Rebels finishing in a tie for 2nd with a time of 2:00.65. UNLV’s Carissa Armijo took 5th place with a 2:01.75.

What an unbelievable championship race by Teneka Ash in the 1650‼️🌟🏊‍♀️Catch the final 25 yards of the event 🎥, as she clocks in ⏱ with the fourth-fastest time in program history‼️ pic.twitter.com/pYm2alz5Av

The first event to finish tonight was platform diving, Wyoming diving star Melissa Mirafuentes pulled ahead to win by 21.05 points, finishing with a final score of 280.50. The event was also huge for San Diego State, who had 5 scoring divers in it, including runner-up Ximena Lechuga Gonzalez and 6th-place finisher Gina Cazares. Platform diving was vital for SDSU, as they had zero swimmers in the next event: the 1650 free.

Nevada had taken the lead following the 1650, however, San Diego State was quick to take it back, with Riley Tapley finishing 3rd in the 200 back (1:57.48), and Aztecs going 1-2 in the B final, and winning the C final. Fresno State picked up a win in the 200 back, with sophomore Athena Clayson making a late charge on the last 50 to win in 1:56.73. She narrowly out-touched Wyoming’s Katleyn Blattner, who finished in 1:56.89.

Kristina Schneider – the Jason Lezak of the Mountain West. Awesome swim and meet!

Thanks for providing coverage of these mid-major conference meets!

They did so well!!! the team showed they were the most prepared mentally and physically.
#oncearebelalwaysarebel