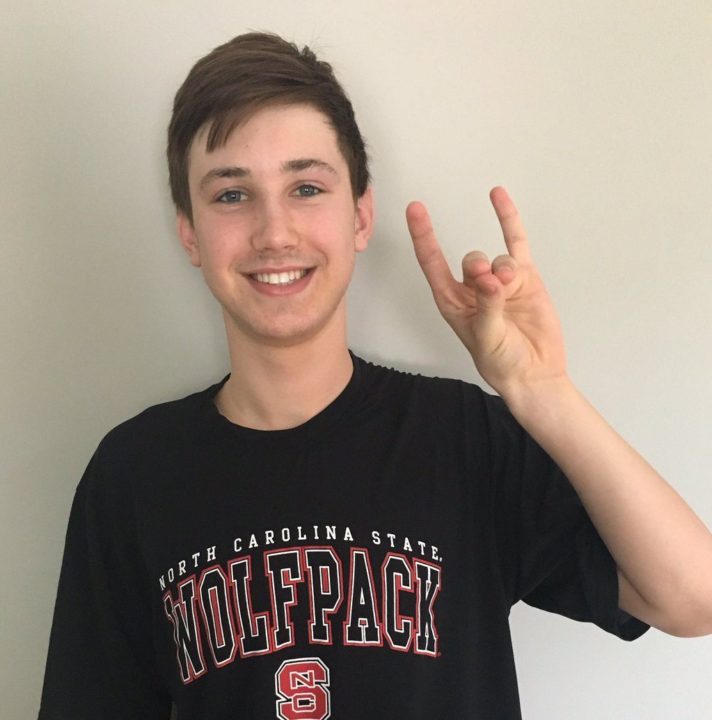 Zach Brown, who swims for Athens Drive High School and Marlins of Raleigh, has elected to attend nearby NC State beginning in the fall of 2018. Current photo via Zach Brown (Twitter)

Zach Brown, a rising senior at Athens Drive High School in Raleigh, North Carolina, has made a verbal commitment to swim for North Carolina State University (which is, conveniently, practically across the street from his high school) beginning in the fall of 2018. Brown said on his social media account:

“Excited to announce my verbal commitment to Swim at NC State! Thanks to everyone that’s helped me over the years.” [sic]

Excited to announce my verbal commitment to Swim at NC State! Thanks to everyone that's helped me over the years. pic.twitter.com/oA54i1pXM9

I knew he was a great country singer but had no idea he could swim!

Don’t think any males in North Carolina even look at UNC anymore. Sad

I believe this is the 11th MOR swimmer to commit to NC State over the past seven years. Katelyn Linker, Nicole Giamber, Kendall Pena, Adam Linker, Scott Johnson (all of whom have graduated), Brooke Rubendall, Justin Ress (currently on roster), Julia Poole, Kate Moore (entering as freshmen this year), John Healy, and now Zach Brown (rising seniors in HS) for the men. Impressive!