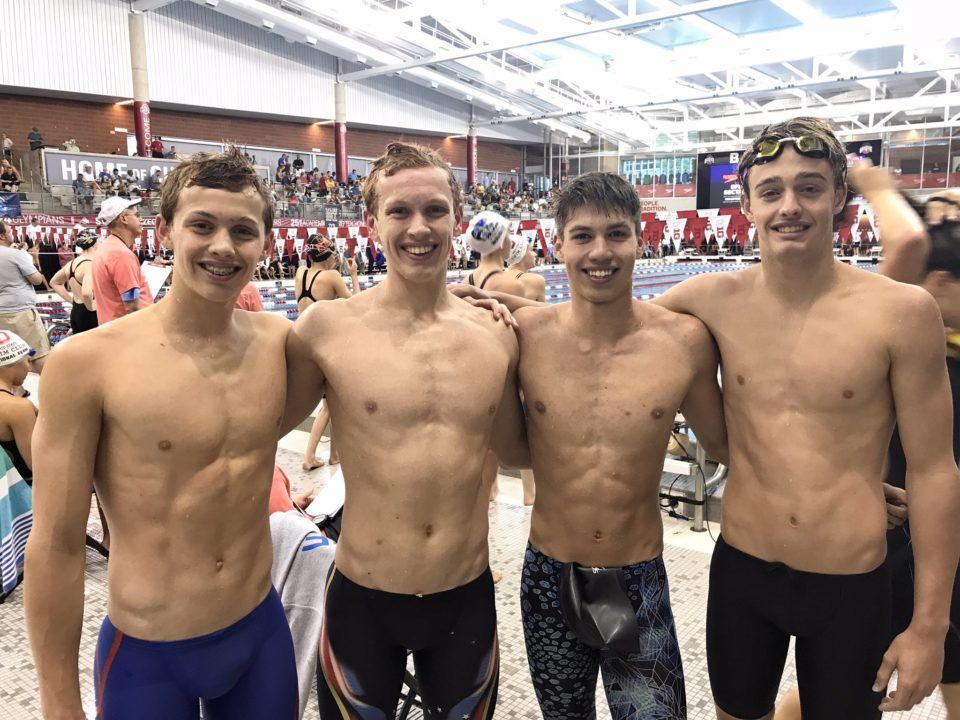 The 15-16 boys from the Mason Manta Rays in Ohio have broken their 2nd National Age Group Record of the weekend at the Columbus Sectional Championships. Using the same four-some, but in a different order, they finished the 200 long course meter medley relay in 1:34.09 on Saturday.

That broke the 2016 record of 1:34.63 set by Irvine Novaquatics. That foursome took almost 1.3 seconds off the old record in the event.

What is most remarkable about Mason’s swim was the 22.44 anchor from 15-year old Adam Chaney. Earlier in the meet, Chaney was 7th in the individual 50 free with a 23.77 – which was his lifetime best swim. He was the youngest swimmer in that A-final by 2 years.

If that wasn’t impressive enough, he showed up big-time in this relay, dropping 1.33 seconds on the anchor – which they needed. Even a 23.0, which still would’ve been an outrageous split for a 15-year old who flat starts 23.7, wouldn’t have gotten the record.

Adam chaney was the anchor…great group! Great race for all 4…order in picture is carson, jake, tyler, Adam.

From someone who was on deck, i’m prety sure it was Carson Foster anchoring that relay. Great splits all around though.

From someone who was actually paying attention on deck, I am CERTAIN that Adam Chaney anchored the national record-breaking relay.

Adam Chaney anchored the relay. He anchored in a 22.7 at Greenboro this summer as well. Consistency and flat starts are a work in process. 🙂

Is he far left? That kid looks like he lifts a decent amount already compared to his team-mates.

Kid on the left is Carson Foster. Apparently somebody on deck said it was him who went that split. Which would make more sense because he is more muscular, faster overall, and also was 23.8 to the feet anchoring their 4free

swimmer! The team’s official Twitter account seems to believe that it was Chaney on the anchor, as do official results. If Carson Foster anchored, then the relay is probably DQ’ed, because you have to have the right swimmer on the leadoff leg.

I never said it was him who did it, but all I did was speculate that it would make more sense if it was him. Also, I have seen countless times where the results did not match the names of the order of the kids on the relay, mainly due to a switch that the meet managers forgot to change. As in the coach correctly made the switches but the people managing the meet/results made an error

This article needs some correcting. The anchor took 1.3 seconds off his best time. The relay only took .6 off the record. Also this is obviously the 200 FR relay not the 200 MR…just look at the splits and time!