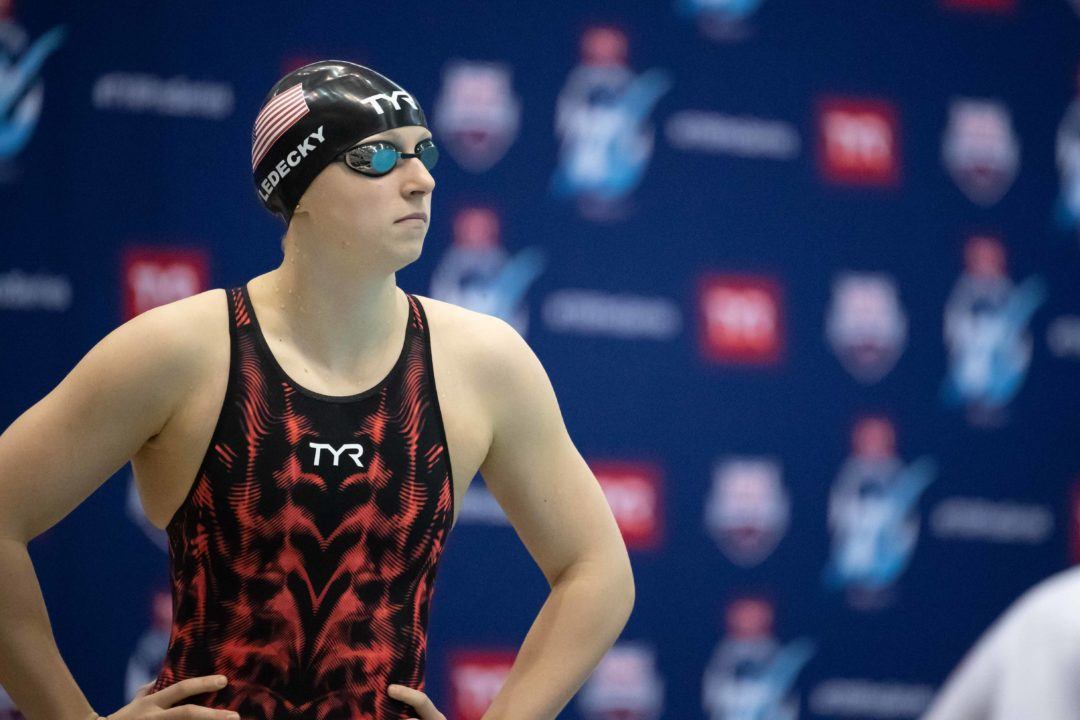 Three-time world champion Katie Ledecky will not get the opportunity to defend her 1500 title in Gwangju, as she's pulled out of the race with illness. Archive photo via Mike Lewis/Ola Vista Photography

Just a couple hours after we found out American star Katie Ledecky was scratching the 200m free the 2019 FINA World Championships due to illness and was questionable for the 1500m free, she has officially scratched the latter as well.

“Team USA officials have made the decision to withdraw Katie Ledecky from this evening’s 1500m free final,” a statement from USA Swimming said.

According to the organization’s statement from earlier today, the five-time Olympic champion Ledecky has felt unwell since arriving in Gwangju. Her coach Greg Meehan, also the head women’s coach at this meet for Team USA, told The New York Times that team doctors had not made an official diagnosis and that getting her back in the meet “at some point'” would be “an ideal scenario.”

Ledecky has won three straight world titles in the event and is the fastest woman in history by more than 18 seconds. Shortly after she scratched the 200, fellow top seeds Taylor Ruck and Emma McKeon did the same. McKeon also cited illness, while Ruck’s camp said it wanted to “protect her performances for the rest of the world championships.”

Ledecky suffered her first distance freestyle event loss at an international meet on day one in Gwangju, when 18-year-old Ariarne Titmus of Australia surged at the end of the 400m free to beat her. Ledecky led at the 350-mark then uncharacteristically posted the slowest closing split of the field; the Olympic champion did not mention being ill during the post-race press conference.

She swam the 1500 heats on Monday morning, taking the top seed. FINA rules do not allow for ‘replacement swimmers’ after the entry deadline, so the USA will not be able to replace Ledecky in her events.

With Ledecky’s 1500 scratch, Spain’s Mireia Belmonte moves into the final after taking ninth in prelims; this will be Belmonte’s first final of the meet.

I don’t want to jump to conclusions, but if multiple swimmers on the US team are suddenly too sick to compete, maybe investigate some kind of poisoning.

It is not true that Ledecky suffered her first distance freestyle loss at an international meet here. She was sick and finished 6th in the 400 freestyle at the 2013 Duel in the Pool.

She was sick there

How many federations is DM selling his “consulting services” to during WC? Looks like even during prelims with US swimmers swimming, he is away from the team making sales. Dave, coach the US Team. Or go home. There are thousands of coaches that would not be squandering this opportunity. Have you no respect for our Team? When will USAS finally take charge of their National Team and leave these self serving twits at home? The USAS membership has doled out thousands of dollars for DM to coach our athletes and this is the effort we get from him?
Unacceptable.
Maybe the swimmers are sick to their stomachs of this lack of support.

That’s a shame but she has to put her health first.

If this one news was about a non American swimmer, I bet the comment section would look VERY different.

right. i don’t see anyone claiming that mckeon is not actually ill or making excuses. i hope they both feel better soon.

Ledecky was sick one year at Duel in the Pool.

It’s amazing that people on this thread would in any way cast doubt about Katy’s medical issues, motives, reasons.
If I were her I’d pull out and enjoy the meet and hang out and support the team.
She’s a great gal and handles herself professionally.
Get well Katy!
We love you and appreciate you.
You are human!

No, it is not amazing that people on this thread would do that. It is only what we should expect.

It s not that people dont like her or anything, it s. Just that we got those big news about her scrathing off the 1500m without an explanation (at least not a good one) so people are speculating.
Personally, i hope shes ok and id really like to see her bounce back and grqb yet another WR by the end of the week, but even i have to wonder how come she swam the 1500 at prelims and only then decided she was too sick to swim the day before.
It could be mental. I doubt it it’s doping. It could also be a big nasty flu. Im assuming if it were something like a shoulder injury or… Read more »

Get well soon Katie and Emma.