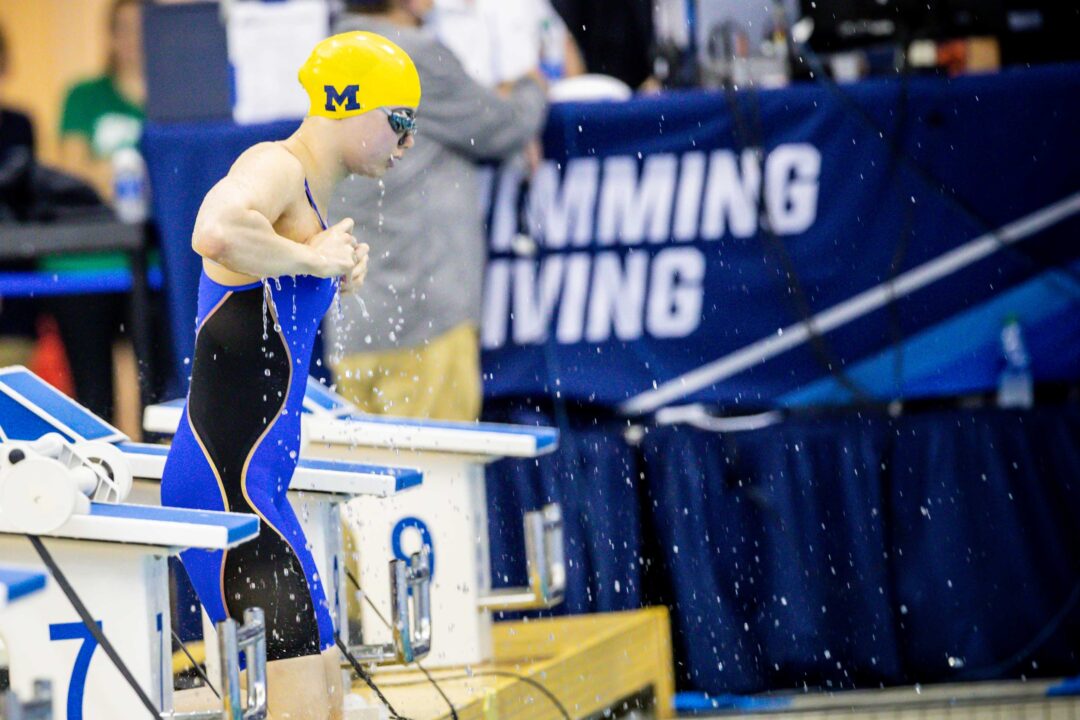 Michigan's Maggie MacNeil will look to defend her 100 butterfly title tonight after placing 5th in prelims. MacNeil is the NCAA record holder in the event. Current photo via Jack Spitser/Spitser Photography

Virginia took a lead heading into day 3. Texas, Stanford, and Alabama were all in a tight race for second place. NC State, Louisville, Cal, and Ohio State all seem to be in a tight battle for fifth through eighth place.

Opening the night will be the 400 IM where Virginia holds the top two seeds. Alex Walsh swam a 4:01.74 this morning and will be next to teammate Emma Weyant tonight as Weyant swam a 4:03.46. Ella Nelson will also be in the A final of the race for the Hoos as she swam a 4:05.47 to be eighth heading into tonight.

Stanford freshman Regan Smith swam the top time this morning in the 100 backstroke as she swam a 49.66. Smith is the American Record holder in the event as she swam a 49.16 in 2021. Last year’s champion and unofficial American Record holder in the 50 backstroke, Katharine Berkoff of NC State tied with Virginia’s Gretchen Walsh for the second fastest time of the morning. Both swam a time of 49.93.

The 400 medley relay will conclude the night. NC State won the event last year in a 3:24.59 which was a new NCAA record. Virginia was second in a 3:25.13. NC State’s NCAA record did not stand long though as Virginia has the fastest time in the country this year after swimming a 3:22.34 at the ACC Championships. NC State holds the #2 time in the NCAA this season as they swam a 3:24.78 at ACCs.

3
0
Reply
There's no doubt that he's tightening up

Reminder that MacNeil won an Olympic final out of lane 7, girl knows how to shift through the gears.

0
0
Reply
.6 ON THE REACTION TIME
Reply to  There's no doubt that he's tightening up

What’s that song – I am Women, Hear me ROAR! Go Taylor!

I hope so! My biggest worry is Thomas bust out a 1:39.09 and beats franklins record 😒

I hope Taylor gets the win in 200, she looked great and deserves it.

I wonder if Virginia will use the same 400 medley relay lineup like in ACC. Earlier 400 IM will take quite a bit from Alex Walsh. I would go with Tiltmann, Wenger, Douglass, and Gretchen

Walsh is swimming the first event and with diving there will be plenty of time to cool down. Don’t think tiltman is the smart call

Tiltmann has the 200 free/100 back double, so I doubt they would put her on it over Walsh who will have much more rest before the relay