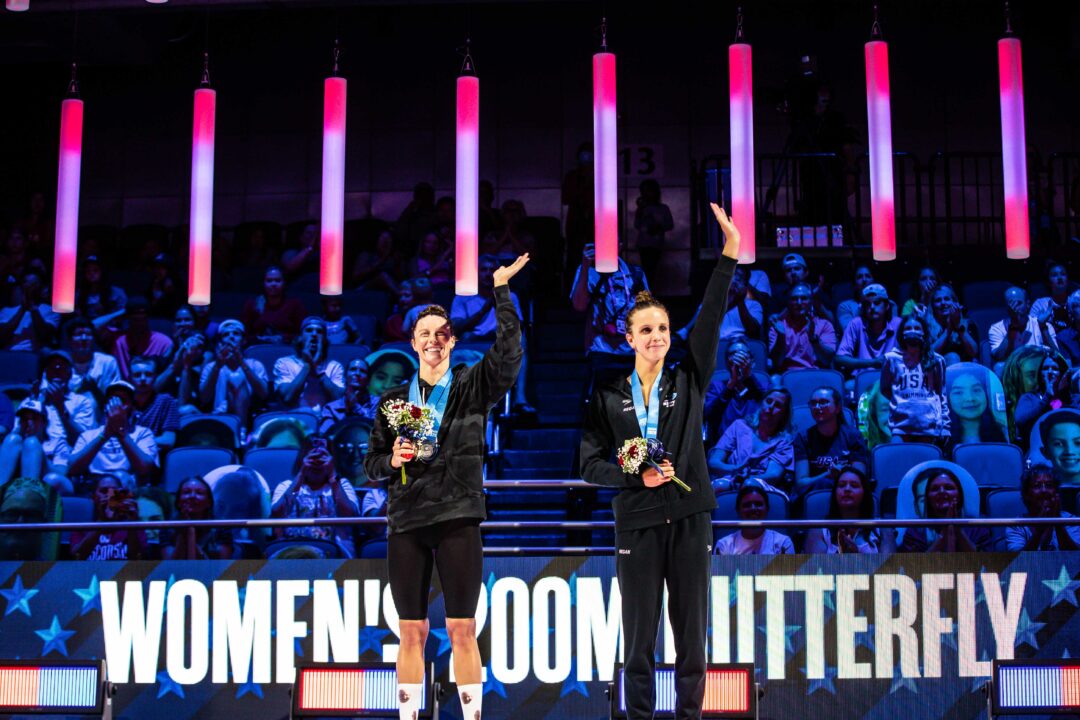 Regan Smith and Hali Flickinger, the Tokyo Olympic silver and bronze medalists, lead the field looking to make the 2022 Worlds team in the 200 fly. Archive photo via Jack Spitser/Spitser Photography

U.S Trials kick off in Greensboro next week with the Women’s 200 Fly. It’s the first event of the first meet with a chance to make an international team since last year’s Olympic Trials. Nerves will be high and all the swimmers will be fresh, which could be a combination for some fast swims right out of the gate. However, this event is less of a free-for-all than it has been in previous quads.

With their silver and bronze medals from the Tokyo Games, Regan Smith and Hali Flickinger became the first American women to medal in the 200m fly since Misty Hyman pulled an upset to win gold in 2000. The event feels less open than it has in a while–it’s hard to bet against either one of these two in this event.

For Flickinger, the move to ASU has clearly paid off, which bodes well as she looks to improve upon her silver medal from the 2019 Worlds. Her best time this season is a 2:06.67 from the Westmont Pro Series, just over a second off her 2:05.85 U.S Open Record that she set at Trials last summer.

Smith’s lifetime best is faster than Flickinger at 2:05.30, which she swam to edge out Flickinger for the Olympic silver medal. Her season best is only 2:10.58 from the U.S Open last December, but as she was in the middle of the NCAA season and not fully tapered, look for her to be much faster here.

Like other swimmers in this event, both Flickinger and Smith will have a busy schedule, but since the 200 Fly is the first event of the meet, neither will have racked up a bunch of swims. It’s also important to keep in mind that Smith and Flickinger’s lifetime bests sit at least two seconds clear of the rest of the field.

The Texas women proved that their fly group is no joke when they scored 37 points in this event at NCAAs last month. Now, Emma Sticklen, and Olivia Bray look to translate that accomplishment into the big pool.

Their teammate Kelly Pash has had the most success in the long course version of the event, but won’t be racing at Trials.

Olivia Bray has often been on the outskirts of the long course field. Her lifetime best 2:09.60 is from 2019, so like Sticklen, she will need to make a move if she hopes to get to Budapest.

Dakota Luther, who recently entered the transfer portal with plans to return to Austin, looks to follow-up a breakthrough NCAA meet with long course success. She was 2:10.13 at the San Antonio Pro Series, well off her best of 2:07.76. Luther was a member of the 2017 Worlds team and won gold in this event at 2019 WUGs. Given her recent international and NCAA achievements, she might be the most likely to break up the Flickinger/Smith duo.

THE REST OF THE NCAA

There’s a slew of other swimmers coming off NCAAs that will be in the mix as well. Olivia Carter and Lindsay Looney swam at the San Antonio Pro Series with the Texas women.

Olivia Carter, the 2019 WUG silver medalist, was even further off her best than Luther at San Antonio. She swam 2:14.11, almost six seconds slower than her PB of 2:08.22. That lifetime best is from 2019, so it will be interesting to see if she can get back under 2:10 in her hometown pool.

At San Antonio, ASU’s Lindsay Looney was 2:09.81. Her best 2:08.40 from when she finished fourth at Olympic Trials. Looney set multiple best times in the yards version of this event over the course of the season, signaling that she could be due for a long course drop as well.

Rachel Klinker and Lillie Nordmann, who swim for Cal and Stanford respectively,  are two other NCAA swimmers to keep an eye on this race. However, it’s harder to predict their form, given that neither has swum a long course 200 fly this season. Klinker finished eighth in the Olympic Trials final, 5.24 seconds behind Flickinger. Nordmann has the best time in this field aside from Flickinger and Smith, but as mentioned before, she’s two seconds off their pace.

With all these swimmers coming off NCAAs last month, it will be interesting to see how well they manage the double taper. That might end up being the deciding factor in this race.

As for the defending NCAA Champion Alex Walsh of Virginia? She has never actually swum a long course 200 fly. She is technically qualified thanks to her short course yards time, but we’re not banking on her racing the event.

Besides Flickinger, another swimmer who won’t have to manage the double taper is Charlotte Hook. Hook is teammates with the surging Claire Curzan at TAC Titans, and finished third at Olympic Trials. Like Klinker and Nordmann, she hasn’t swum a long-course 200 fly this season, so it’s hard to gauge where she’s at with her training. However, she did win the silver medal at SC Worlds in December with a swim of 2:04.35.

Seventeen-year old Tess Howley sits eleventh on the psych sheet. She was two hundredths off her lifetime best earlier this season, so she looks primed to crack a new best in Greensboro.

Dark Horse: Lucy Bell (FAST) – At 16, Bell was one of the youngest qualifiers for Wave II Trials. This season, she swam a lifetime best 2:10.25 at the Westmont Pro Series where she was one of only three women in the final. She has some work to do to hit the ‘A’ cut, but if she hits her taper she could be in line for another drop and potentially play upset in a much older field.

Looking back at SwimSwam’s picks for 2021 Trials makes these predictions funny. A lot of weight is placed in scy performance this year. Lcm is a different animal.

The suits really made such a difference for this event. I can’t see this WR being broken in my lifetime.

Off topic, but what do we think about the women’s 1500 Free? Ledecky, Sullivan? Ledecky, Grimes?

Would really love to see some Texas girls make the 200 fly and 200 free relay spots. They did so well at ncaa, can they translate to long course?

She has not announced a retirement that I’ve seen, but also hasn’t raced since Trials and started a full-time job at an urgent care in January.

So, read from that what you will.

Regan Smith for the win, and Sticklen for third.

As for the defending NCAA Champion Alex Walsh of Virginia? She has never actually swum a long course 200 fly. She is technically qualified thanks to her short course yards time, but we’re not banking on her racing the event.

Now why wouldn’t the NCAA champion in the 200 fly swim it at World trials when , in all likelihood, she wouldn’t have any other events? She’s easily a top-four finisher and strong contender to win.

Reading is really hard though.