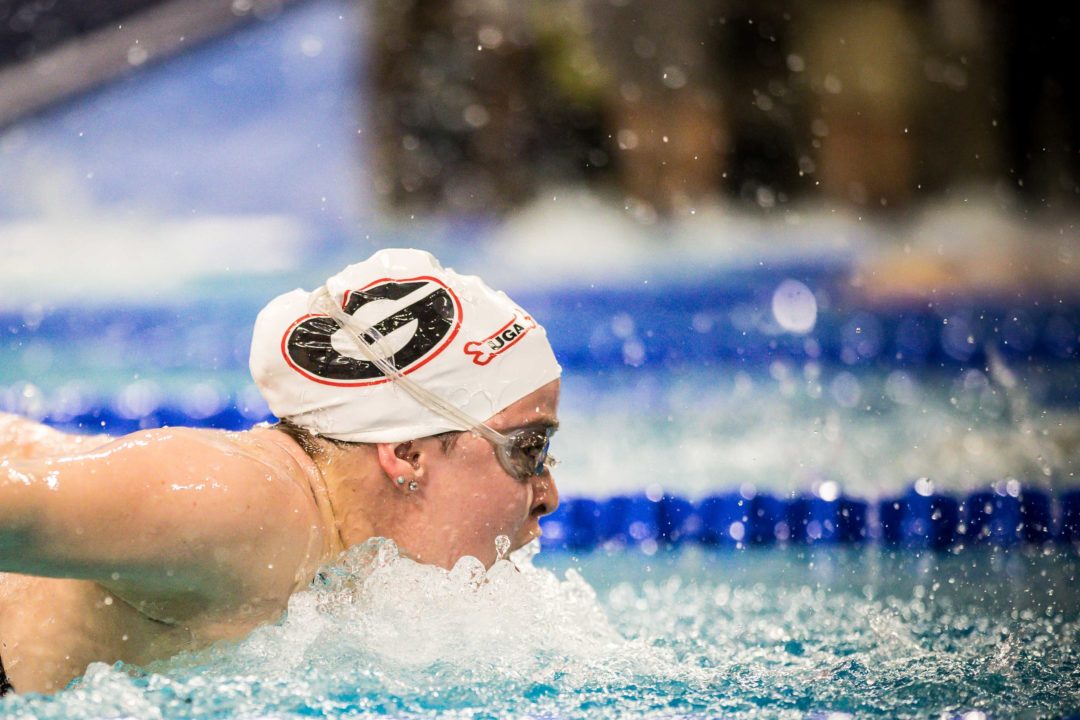 All-American and World University Games champion Dakota Luther says she is "looking into graduate options" at the University of Texas. Archive photo via Jack Spitser/Spitser Photography

World University Games champion swimmer Dakota Luther entered her name in the NCAA Transfer Portal on Wednesday and says that she is headed back home to Austin and the University of Texas.

“(Georgia) has gifted me with so many opportunities to excel in the classroom, in the pool, and out in the real world,” Luther told SwimSwam. “I can’t thank (coaches) Stef (Moreno), Jack (Bauerle), Jerry (Champer), Brian (Smith), and Neil (Versfeld) enough for working with me these past 4 seasons. They have helped me grow into the person I am today. I’ll always be cheering for the dogs.”

Luther was the #13-ranked recruit coming out of high school, and she scored 46 individual NCAA Championship points for Georgia at three meets. She was seeded to score 16 at the 2020 championships, which were canceled by the COVID-19 outbreak. Her highest individual output came during her senior championships in March, scoring 21 points that included a 4th-place finish in the 200 fly. She was 5th in that same event, her best, at the 2021 NCAA Championships.

Luther now returns to the city where at Westlake High School, she was a three-time individual state champion.

Half of the NCAA A-Finalists from last year’s NCAA Championship meet will be at Texas next season.

There are lots of ties for Luther to the University of Texas. Current head coach Carol Capitani was a former assistant at Georgia, though she left well before Luther arrived on campus. Luther’s mom Whitney Hedgepeth who won 3 NCAA titles and the maximum 21 All-America awards in three seasons at Texas.

Hedgepeth went on to win a gold and two silver medals at the 1996 Olympic Games as a backstroker.

Congrats to Dakota on a fantastic undergrad career! Looking forward to seeing what she will do here in Austin!

On another note… Sates is going professional ???

What was the point of coming to Georgia for a hot minute?

It’s confusing … but guess it only took a couple months for him to make a decision.

Yeahhh you improve that much in a single semester then dip??

he didn’t improve at all tbh… it was his first time swimming yards and just went his conversions, slower in some

something is amiss at Georgia

The one part that sticks out to me is that she “can’t thank her coaches’. Minor context typo.

Enough? Does that make sense to you?

What fact did they get wrong here?

Now Carol needs to get or develop some sprint free types!

Congratulations Dakota!! Will miss seeing you rep the G

smart for Texas to address their weakness, the 200 fly!

Yeah, perhaps the men should address their weaknesses too… swimming