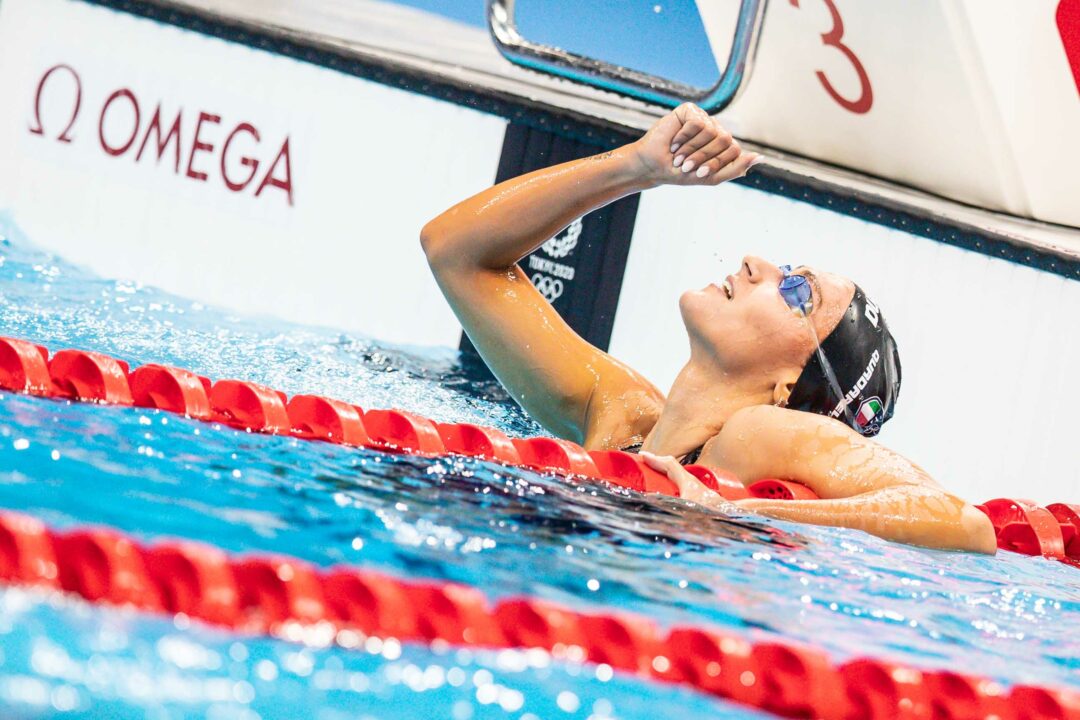 Tokyo 2020 bronze medalist Simona Quadarella is among the 10 swimmers who qualified to swim individual events in Budapest. Current photo via Jack Spitser/Spitser Photography

In 2019, Italy sent 21 swimmers to the last World Aquatics Championships. There, they ranked 5th among all nations on the medals table with 3 gold, 2 silver, and 3 bronze medals.

The majority of Italy’s stars will be present in Budapest including Olympic medalists Nicolò Martinenghi, Gregorio Paltrinieri, and Simona Quadarella. Both Martinenghi and Quadarella won bronze medals in the men’s 100 breast and women’s 1500 freestyle, respectively. Paltrinieri on the other hand took silver in the 800 freestyle with a 7:47.73 (along with a bronze in the 10 km open water).

Notably absent from the roster is Federico Burdisso who took bronze in the 200 butterfly in Tokyo by swimming a 1:54.45. He finished third overall in the event at Italian Trials with a 1:56.16, meaning that he missed out on automatic qualification. Neither of the top 2 men in the event, Giacomo Carini (1:55.53) and Alberto Razzetti (1:55.79) hit the Italian qualification standard of 1:55.20.

World record holder Benedetta Pilato will rep the Italians in Budapest as well, having qualified in both the 50 and 100 breaststrokes. Pilato unleashed a 29.85 to win the event at Trials, getting under the Worlds cut of 30.20 and trailing her own world record from last year of 29.30. In the 100 breaststroke, both Pilato and Arianna Castiglioni were under the cut and will swim the event in Budapest.

While only 10 swimmers have secured individual swims thus far, some swimmers, such as Burdisso, may still be added to the roster and relay-qualified swimmers may be given the opportunity to race individual events.

I realize it’s not directly related to the list of qualifiers, but does anyone know if Santos Condorelli will continue competing for Italy?

What about Galossi finishing 2nd with a 3.45,93? Should be good enough in my opinion…, i guess that around 3.45 is what ir takes to make the final. Should definitely be on the roster. But i feel De Tullio is gonna swim the 400 tho with his 3.44 win

Yeah this is a little harsh, like a decent amount of their stars are being limited here. Only the 15 for paltrinieri? No individual events for Detti or Panziera?

Most likely they will get a chance to swim individual events that they didn’t hit QTs in, since they are already in the team, why not let them swim?

Butini said there was no way they wouldn’t let someone swim an event for missing the QT by 0.01. This isn’t a list of events they will swim, it’s just a list of individual and relay swimmers who qualified by making the QT.

Italy seems to believe they’ve gotten good enough to where they don’t need to auto-qualify swimmers. They might be right.

Burdisso was great in Tokyo, but he wasn’t great at NCAAs or at this Trials meet.

Yes, moreover this is a peculiar year indeed: after a long (SC Worlds at December) Olympic season, with EuroChamps at mid-August in Rome obviously very important for Italian Swimming, whilst May Worlds have been deleted and then reinserted in June. So several Italian swimmers have decided to prioritize Euro Champs and Burdisso (who suffered tense at his first Olympics) among them.

Why are their times so hard??

These are the athletes who officially qualified, but the 11 relay-only swimmers will probably be given a chance to swim their events as well. Especially as there isn’t a second athlete qualified for races like 100-200 free M. It isn’t the final roster yet as well, Butini told Italian TV they would consider carefully before releasing it. And mentioned how Burdisso is a case they will take into consideration as well.

Also, Butini specified they will release the official roster after Easter

I think there’s a mistake, Simone Cerasuolo qualified in the 50 breaststroke not the 50 backstroke.