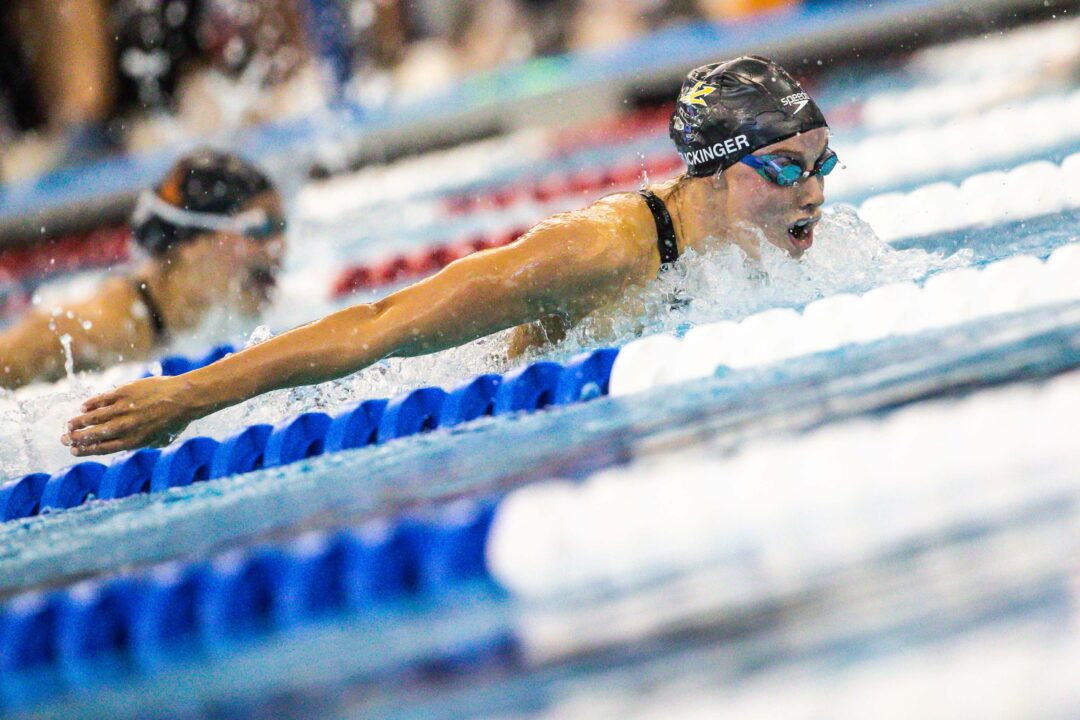 Qualified in two events already, Hali Flickinger is one of many athletes hoping to add more swims to their Worlds schedule on Day 3 in Greensboro. Current photo via Jack Spitser/Spitser Photography

Many swimmers already qualified for the Worlds team will try to set themselves up to double (or triple) up on events. Despite pre-meet concerns about how collegiate swimmers would fare with the quick turnaround after NCAAs, they’ve had a strong meet so far, so look for that trend to continue.

400 IM Olympic silver and bronze medalists Emma Weyant and Hali Flickinger are gunning for a chance to defend those medals on the Worlds stage. With #3 Leah Smith’s scratch, there’s an almost seven second gap between them and Justina Kozan, who has the next fastest time.

Carson Foster got over the hump and qualified for his first senior long-course international meet via his third place finish in the 200 free, which puts him on the 4×200 relay. Now, he’ll look to qualify for an individual swim in the 400 IM. We know he tends to blast away from the field in prelims, so expect more of the same from him here. Chase Kalisz, Jay Litherland, and Bobby Finke look to grab lanes to challenge him in finals.

Teen phenoms Torri Huske and Claire Curzan won’t be in the same 100 fly heat in prelims, but get ready for their third round facing off in finals. Huske sits atop the psych sheet, with her American record time of 55.66. Also looking to get in on the action are NCAA superstar Kate Douglass and Rio Olympian Kelsi Dahlia, who is down to her last chance to qualify for Worlds.

In the men’s 100 fly, Caeleb Dressel and Michael Andrew will set up for their second head-to-head of the week. Dressel leads the field with his 49.45 World record. Shaine Casas, Luca Urlando, and Trenton Julian will be threats here too.

This race will also feature Drew Kibler and Ryan Murphy, who don’t typically swim butterfly and have already qualified in their primary strokes.

Lilly King and Lydia Jacoby will switch gears, dropping down from the 200 breast for the 50. 100 breast NCAA champion Kaitlyn Dobler could be a factor here, as well as veteran Emily Escobedo.

We’ll see Michael Andrew again in the 50 breast for the back half of his double. Nic Fink, who tied for the win in the 200 on Day 2, gets in on the sprint action.

In the 50 back, American record holder Olivia Smoliga is still looking for her first Worlds qualification. It’ll be an uphill battle; in the hunt for a spot in the finals are her Olympic teammates Claire Curzan, Regan Smith, and Rhyan White, all headed to Budapest. Don’t discount Katharine Berkoff, the American record holder in the 100-yard back and first woman to break 49 seconds.

Justin Ress sits #5 on the psych sheet for the men’s 50 back because swimmers entered with their 100 times, but he holds the fastest 50 time in the world this year. Keep an eye on Murphy and Casas in their second swims of the session. Hunter Armstrong has also shown speed this week, so watch for him as well.

I love Kate Douglas since she is one of the few that can do both breaststroke and fly.

Even if Weyant is off, I don’t see anyone else making top 2.

Going straight from Heats to Finals is so much more exciting. Means they have to go for it in the heats and you need to finish in the top 2/3 in your cycle-seeded heat to have a chance of making it.

That’s why at Olympics and Worlds the 400 heats are so exciting. Daiya Seto missing out on the 4IM final is a great example of this.