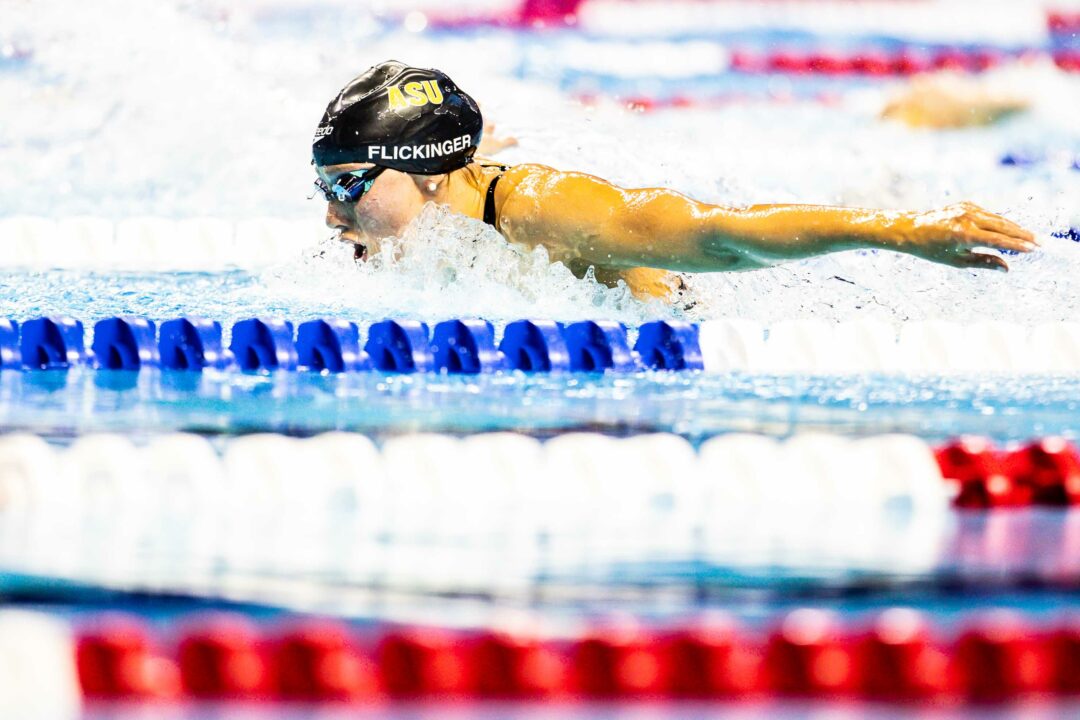 Hali Flickinger is in position to become the first member of the U.S. World Championship team tonight in the final of the women's 200 butterfly. Archive photo via Jack Spitser/Spitser Photography

Hali Flickinger swam away from her heat to grab the top seed in the women’s 200 fly this morning in a time of 2:07.75. Tonight, she’ll be pushed by TAC Titans’ Charlotte Hook and a crowd of NCAA swimmers that includes Olympic silver medalist Regan Smith. Second through eighth was separated by just 1.34 seconds this morning, so make sure you’ve got your live stream turned on right at 6 pm ET because we’re set for a close opening race.

Trenton Julian improved his closing speed massively this morning and blasted a new personal best of 1:54.34 to become the fifth-fastest American of all time in the men’s 200 butterfly. He’ll have to hold off Zach Harting, Chase Kalisz, and Luca Urlando to secure his ticket to Budapest though, which will be a challenge. Nicolas Albiero was two seconds off his PB this morning, but still snuck into the final in lane eight and is a potential candidate for some outside smoke tonight.

Don’t have your snack break during the ‘B’ Final of this event – Thomas Heilman swam a time of 1:58.01 this morning, making him the second-fastest American 15-year-old ever, trailing only Michael Phelps.

Speaking of outside smoke, Kate Douglass held seed this morning to grab lane 8 in the women’s 100 free. She has an uphill battle to climb for a relay spot though; the rest of the field includes six of her Olympic teammates and Mallory Comerford, who looks to have found her groove again.

The oldest swimmer in the field, Natalie Hinds, comes in seeded first after being the only woman sub-54 in the prelims in 53.77.

Based on this morning, the men’s 100 free might be the best race of the session. It took a blistering 48.73 to make the championship final, with Caeleb Dressel leading the way in 48.12. The question seems to be not if we’re going to see a 47, but how many. Ryan Held is on the warpath, sitting a close second in 48.20, and Drew Kibler, Kieran Smith and Hunter Armstrong all dropped lifetime bests. Don’t forget about jorts king Brooks Curry either.

Katie Ledecky will be surrounded by Sandpipers as she starts her campaign for a fifth-straight World Championship title in the 800 free. In the men’s 1500, a young field will be chasing Bobby Finke. At 22, Finke is the oldest swimmer in the field, and the reigning Olympic champion is expected to easily dominate his way to a second World Championship berth. The battle for second, and the 15:04.64 FINA ‘A’ cut, is on, however.

I think the top 4 in the Men’s 100 free will be Dressel, Held, Curry and Kibler in that order.
For the women’s I believe it will be Hinds, Curzan, Weitzeil, Huske in that order.

I guess I’m a former american as I lived there till I was 7 but have lived in UK since. I have an interest in USA swimming but typically root for GB

How do we watch the 1500 and 800? Not streaming on usaswimming or olympic?

3
0
Reply
human
Reply to  Will

it just finished it was streaming on usa swimming tho

also i have a question..if someone (gretchen walsh) had a breakout swim and went faster than the 6th place person in the a final would she be considered for the worlds team? or would she have to do it in the a final to qualify?

Must go from the A to make worlds

Thinking back I honestly feel for him, it wasn’t like he had a super bad prelims swim (48.79) but he missed out on the A final by 0.01 and ended up blasting the 2nd fastest time in the field during finals

I ship Katie and Erica

Does the Olympic livestream cost money?

In my case, the Olympic Channel is one of my cable channels so I get it on my regular TV at no additional cost. I believe its a sub-channel of the NBC line-up.

You can get a free 2 day YouTube TV trial that includes the Olympic channel.

What about in 🇨🇦??