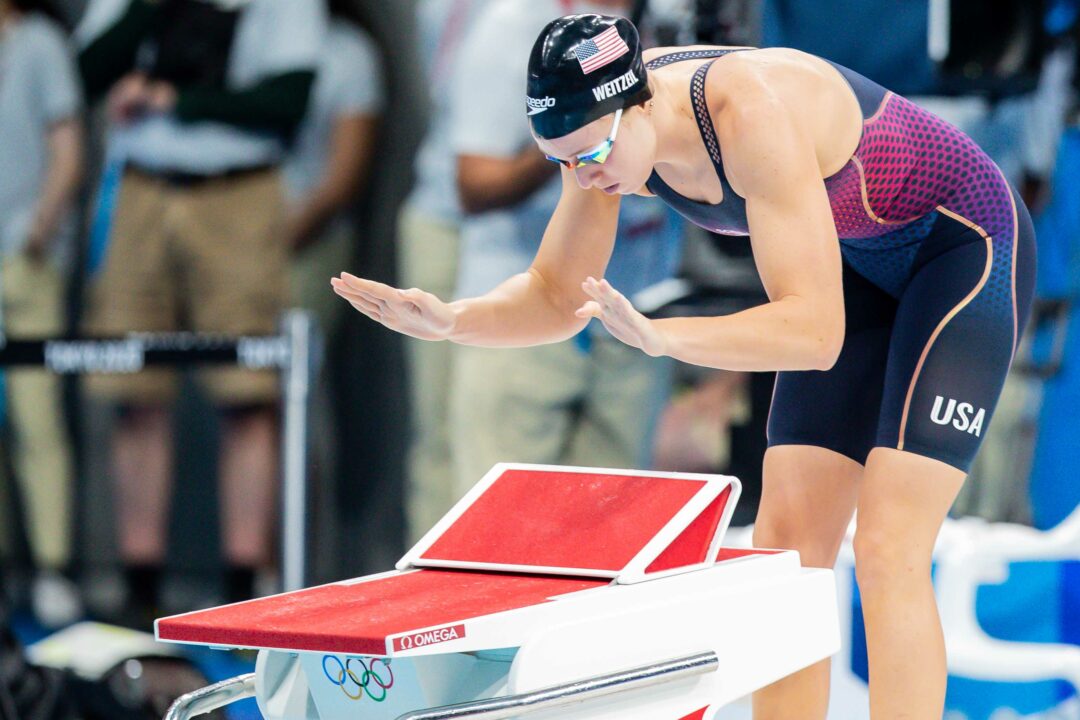 Abbey Weitzeil, who has represented the USA in the 50 free for the last five years, will fight for a spot with a wave of college and junior stars.

Simone Manuel has been the star of the women’s 50 free for as long as we can remember. She’s the only American woman who has been under 24 seconds, the reigning world champion, and represented the stars and stripes in both the 2016 and 2021 Olympics. However, she won’t be racing this year at trials, as she has not raced since the Olympics and revealed that she was diagnosed with overtraining syndrome.

Manuel’s absence, as well as the absence of 2021 Olympic trials finalist Catie DeLoof, leaves room for a wide open field to take her spot.

Between the mix of rising stars and veterans, this race is shaping up to be one of the most competitive events at trials. In addition, since the 50 free is often decided by tenths of seconds, one small move on the start or an underwater can change the entire outcome of the race.

BATTLE AT THE TOP

Our top pick is Abbey Weitzeil, who has long been a staple of consistency in American women’s sprinting. Although she doesn’t have the individual titles or the American records to her name, Abbey Weitzeil has been up there with Manuel almost every year. She’s represented the USA alongside her in the event at the last two Olympics and world championships, and recently swam a personal best of 24.19 in the semi-finals at the Tokyo Olympics. Later in finals, she was a little slower, going 24.41 to finish eighth.

Weitzeil currently holds the second time in the country, a 24.73 from the Westmont Pro Series, but expect her to get faster. Out of everyone in the field, she’s the only one who has performed over and over again, which is why she’s the favorite to take this race.

Behind Weitzeil are a line of young stars who are waiting for their time to shine. Perhaps the biggest swimmer waiting to prove herself is University of Virginia swimmer Kate Douglass.

Douglass has come a long way from her sixth place finish at trials when she went a time of 24.78. This NCAA season, she dropped her best time by 0.25 seconds, and broke Weitzeil’s NCAA, US Open, and American record at National Championships to record a new personal best of 20.84. As the fastest ever in short course yards, the biggest question is, will she be able to translate her success over into meters? She hasn’t swam the event in meters at all, but she’s riding a massive wave of hype as she comes into this meet.

However, Douglass will be fresh off swimming the 200 IM the same night, an event where she is a heavy favorite to make the team in. It’s just a matter of how well she will handle the double.

Douglass’s teammate, Gretchen Walsh, is already a World Junior champion in the event and looks to make an appearance in the senior version of the meet. Last year at trials, after failing to make it out of prelims in the 100 free, Walsh bounced back with a fifth place finish in the 50 free with a new personal best of 24.64. In the last year, she’s had major improvements in her yards times, including becoming the third-fastest woman in the 50 free when she finished behind Douglass at NCAAs with a 20.95. She also recently went a near PB of 24.70 at a UVA time trial, which is a very promising sign (although the swim was hand timed).

Although Weitzeil was the Olympic finalist, it was Claire Curzan who had the fastest time in the country last year. She clocked a 24.17 at an in-season meet last May (which stands as her personal best and the 15-16 NAG), but then just missed finals at Olympic trials to finish ninth in semifinals with a 24.76. She recently broke the 17-18 National Age Group record at the San Antonio Pro Series with a time of 24.43, the fastest for an American so far in the 2021-22 season.

Curzan has been on fire so far, but keep in mind that she struggled to carry her in-season speed into trials last season. With more experience swimming at major meets under her belt, this year could be different.

Curzan’s future Stanford teammate, Torri Huske, is also one to watch. She just missed out on the Olympic team in this event last year, finishing third with a 24.46, just 0.16 behind Weitzeil. The 50 free falls on the same night as the 200 IM, an event that Huske finished fourth in last year at trials. She’s entered in both of the events, meaning she, like Douglass, will have to deal with a grueling double on the final night of the meet.

OTHER JUNIOR AND COLLEGE STARS

Another breakout swimmer, 16-year-old Anna Moesch, turned heads at YMCA Nationals last month when she clocked a 21.97 in the 50 yard free to become just the fourth 15-16 year old girl to go under 22 seconds. She has a long course personal best of 25.29 from last year and swam at Wave II trials, which was before she made the move from Streamline Aquatics Club to the Greater Somerset County YMCA, the latter of which is one of the strongest clubs in New Jersey. With better training and more high level racing experience, it wouldn’t be surprising to see her to dip under 25 next week and claim the top spot to qualify for Junior Pan Pacs.

Tennessee commit Camille Spink will also be swimming this race, coming in as the 14th seed with a time of 25.36. She placed second at Wave I trials last year, and then carried her performances into Wave II trials where she was 17th, just missing out on semifinals.

Missy Cundiff, who is seeded eleventh, shouldn’t be overlooked. The William and Mary swimmer is one of the few mid-major women to go under 22 seconds in yards, but she also got 0.72 seconds faster last season in long course meters. She won Wave I trials in this event and holds a best time of 25.25, but she’s going to be right up there with the Wave II swimmers this year.

Alabama swimmer Morgan Scott has made huge strides in her 50 free this NCAA season. She broke 22 seconds for the first time at the 2021 Tennessee Invitational by hitting a 21.80, and then got that time down to a 21.43 at NCAAs when she finished fourth in the 50 yard free. She’s seeded 19th with a 25.56, a time she swam before her breakout yards season, so there’s still room for her to get faster in meters.

Louisville’s Gabi Albiero and NC State’s Katharine Berkoff are seeded 17th and 28th respectively, but both of them had huge improvements in yards this year as well, and are primed to drop time in long course.

The biggest pro swimmer aside from Weitzeil coming into this race is Erika Brown. Brown was one of the top swimmers in the 100 free last year, but was only eighth at trials in the 50 free, swimming a time of 24.93. She’s been as fast as 24.57 before, which would have bumped her up to fifth in that race. She’s put up a few sub-25 times at the Pro Swim Series races, and is the third-fastest woman this year with a 24.81, just behind Curzan.

Natalie Hinds, Mallory Comerford, and Linnea Mack are all veterans that are favorites to place top 8. Hinds, who represented the US in the 4×100 free relay in Tokyo, finished eleventh at trials. She’s much more geared towards the 100, but she recently made the move from Georgia to her alma mater Florida, where she trains in one of the hottest training groups in the country.

Comerford, who is better known for being one of the few women to go 52 in the 100 free, finished all the way down in 33rd last year at trials. However, she comes in as the eighth seed with a time of 25.11 and has been as fast as 24.80 before- although her PB is from 2018. Mack is seeded fourth with a 24.49, and although she’s currently faster than a lot of the young stars we just mentioned, it will be difficult for her to fight their fast improvement. This season, she has been training both in the United States and Switzerland.

With that all being said, this event is such a toss-up, and falls on the very last day of the meet. As most of the people racing the 50 free will be beaten up after a long week of racing, anything could happen.

*unofficially went 24.70 in a time trial this year

Dark Horse: Charlotte Crush– The 14-year-old from the Lakeside Swim Team wowed us last month by clocking a 22.14 50 free and a 51.46 100 fly. She recently swam a personal best time of 26.31 at the Indianapolis Speedo Sectionals, but we haven’t seen her full potential in a major long course taper meet just yet.

The fact that we had to go to Allison Schmidt for sprint is not the best sign. In 2019, Manuel was 52.04, Comerford was 52.9, Gretchen Walsh was 53.7. American sprinting was looking very promising. None of them made the team. It’s amazing how fast talent can come and go, all three have the chance to get back on the team one day, but I really expected Tokyo to have at least 5 sub 53.8 100 freestylers.

The winner will be the one who best imitates Dressel’s start.

Bit hard when they cannot have that amount of muscle.

Linnea Mack is going to shock us all and win the 50 out of lane 8. Mark my words

Weitzeil’s 24.19 was in the semi in Tokyo. If she repeated that in the final she would have got bronze.

Same as 100 fly: Curzan and Douglass.

Why should American hope in women sprint to be so short lived?
When Simone Manuel won the Olympic gold medal I thought it was a lucky accident. And I wasn’t even sure if her overwhelming emotional reaction was about winning the race or it was an emotional surprise of swimming for the first time well under 53 sec. She was 53 low swimmer coming to Olympic Games and her first race there in relay was 53.3. I was sure that she will bounce back to the 53 range next season. But no the absolutely unexpected 52.27 and then absolutely unbelievable 52.04 and sub 24 in 50 followed.
For those who still hadn’t had enough we got another “quantum… Read more »