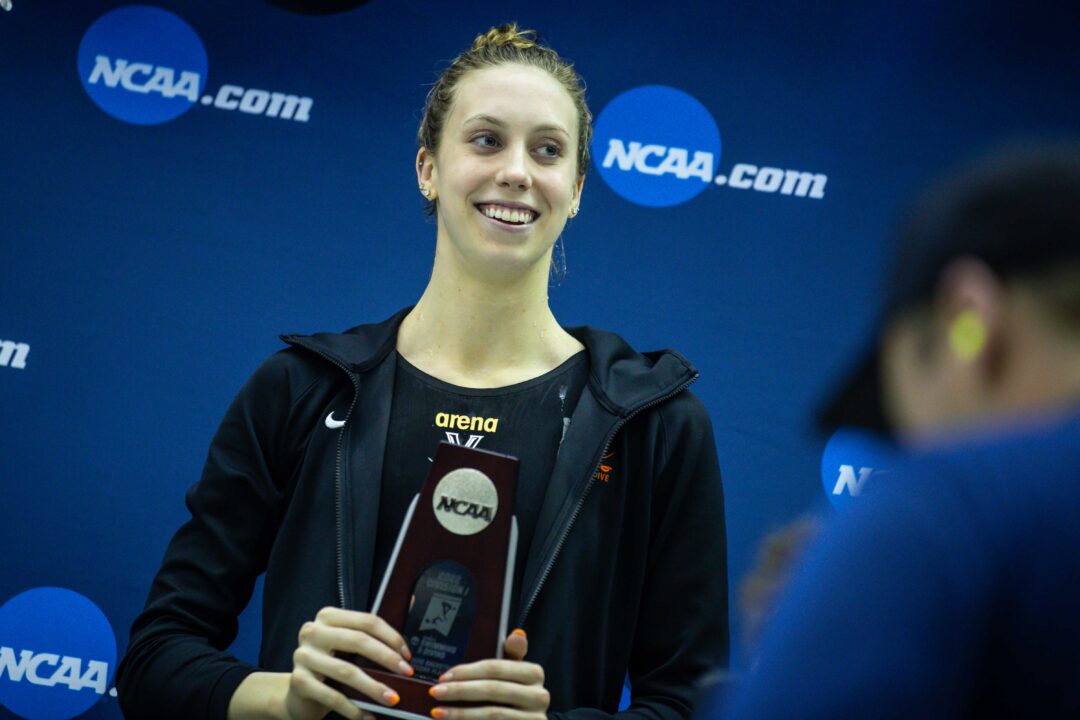 Gretchen Walsh went a 24.70 in the 50 free and a 1:01.89 in the 100 back on day two of a UVA LCM time trial meet to prepare for international trials. Archive photo via Jack Spitser/Spitser Photography

Day two of Virginia’s long course meter suited time trials brought more racing from swimmers that are primed to be competing at the U.S. International Team trials later this month to be selected for the 2022 FINA World Championships this June in Budapest.

The Walsh sisters dueled it out in the 50 free, with Gretchen Walsh swimming a 24.70 and Alex Walsh swimming a 25.30. Both swims were very close to their respective best times, although it is important to note that the 50s, unlike the other races, were timed by hand. Alex’s best time stands at a 25.36 from a UVA intrasquad meet in 2020, while Gretchen’s best time is a 24.64 from when she finished sixth at Olympic trials last year.

For Gretchen, the swim is unofficially faster than the 24.71 she swam at world juniors in 2019, the year that she was at her peak in long course swimming. Although she has yet to reach her 2019 times in the 100 free, the fact that she swam so close to her best time this meet in the 50 free is very promising for the upcoming trials. In addition, she also has the accolade of being the third-fastest woman of all time in the short course yards 50 free with a time of 20.95 that she swam to finish second at NCAAs this year.

Aside from the 50 free, Gretchen Walsh also swam the 100 back in a time of 1:01.89. The time is just over a second off her best time of 1:00.26 from U.S. Nationals in 2019. Although Walsh didn’t swim this event at trials last year, she recently became the second-fastest woman ever in both the short course yards 50 and 100 back, meaning that she could potentially race in the long course 50 or 100 back at trials this month.

The 100 fly was perhaps Douglass’s second-best swim at trials, just behind when she made the Olympic team in the 200 Im. She just missed out on qualifying for the team in the event, finishing a little over a tenth behind Claire Curzan in third. Douglass is now the American record holder in the short course yards 100 fly, and although the long course version of the event gives her a shot at qualifying for another individual worlds event, it’s not certain that she will be able to defeat butterfly powerhouses like Curzan and her future Stanford teammate Torri Huske.

Jack Aikins also time trialed the 100 back, going a time of 54.44. His best time is only a few tenths faster, as he swam a time of 54.03 to finish twelfth at Olympic trials last year. However, Aikins is stronger in the 200 back, the event in which he finaled at Olympic trials in, and was #7 all-time in the 17-18 age group.

Yesterday, Aikins swam the 50 free, but an official time for him was not recorded.

Backstroke in the bathtub and in the adults’ pool are 2 different sports.

Yea, bc the US has struggled to succeed in LCM backstroke events…….. 🤔

2:11.96 is the only time that jumped out as better than I expected. That’s the event I would expect Walsh and Douglass to improve the most, based on the college results. Otherwise I think the most interesting long course possibility is Douglass at 200 breaststroke. When I saw how smooth her action looked at the NCAA Championships my immediate impression was that stroke is going to thrive long course. All the flippy events are far greater wild cards and not as promising.

I timed it a few times on my phone and I got the 24.7 range every single time.

Emma is a world-class 400 IMer long course and is the Olympic silver medalist, so I wouldn’t totally count her out just yet.

Not counting her out, just she will need to be about 12 seconds faster in 3 weeks.

Hopefully they will all be significantly faster. These swims across the board are pretty poor with a couple that are just okay. And it is closer to 2 weeks than 3.

Flickinger is pretty much a lock for the first 400 IM spot. Number 2 is open.

Yea, UVA time trials like this usually have eye-opening swims. This one, not so much.

I would say swimming a 400 IM in a practice setting and with limited competition is a lot harder to swim fast in than a 50 or 100.

Grimes will grab the first place among Americans in this event.

Flickinger and Leah Smith are swimming very well. That’s going to be a great 4IM race.

Weyant has a better chance in the 400 Free

The LC 100 Free and SC 100 Free are very different. For Long Course, you need endurance and the ability to maintain momentum with not any walls. In short course, you have walls so that more momentum is created. Yes Gretchen is great and could very well become one of the best NCAA SC Sprinters of all time, but that doesn’t mean that her LC 100 is going to come together.

Interestingly, two of the girls she beat by about a second back then (Meg Harris and Mollie O’Callaghan) have since progressed very nicely in the LCM 100 free.

Yeah this happens.
In 2013 world junior championship Caelab Dressel beat Luke Percy in the 100 free, by a tenth of a second & Luke Percy beat Caeleb Dressel in the 50 free & the comments was these 2 were the future in sprint swimming. Well we know what happened.

I don’t know if that’s too accurate of a take when it comes to US swimmers. Successful get a major culture/training shock when they go off to college while for the most part internationals keep on progressing in the same manner and with the same teams theyve always been with.

Some can make the transition quickly, others take a while. And of course some do fall off but they usually fall off altogether in the ncaa. Walsh has improved dramatically in ncaa. And it’s only her first year. Do not underestimate what she can do in the coming years

I’m not saying she can’t. I think she has potential to be US best sprinter.
Just saying Mollie O’Callaghan is a year younger & has developed quicker, this happens.

Differently perhaps. Quicker? I’d say Gretchen’s ncaa swims are better than anything Maggie has done. But it’s not a perspective anyone who doesn’t follow ncaa would understand.

I would say in recent years the 200 SCY free has been a better predictor of the 100 LCM free, but I wouldn’t rule out Gretchen from making worlds given she’s proven her ability to do a fast LCM 100.