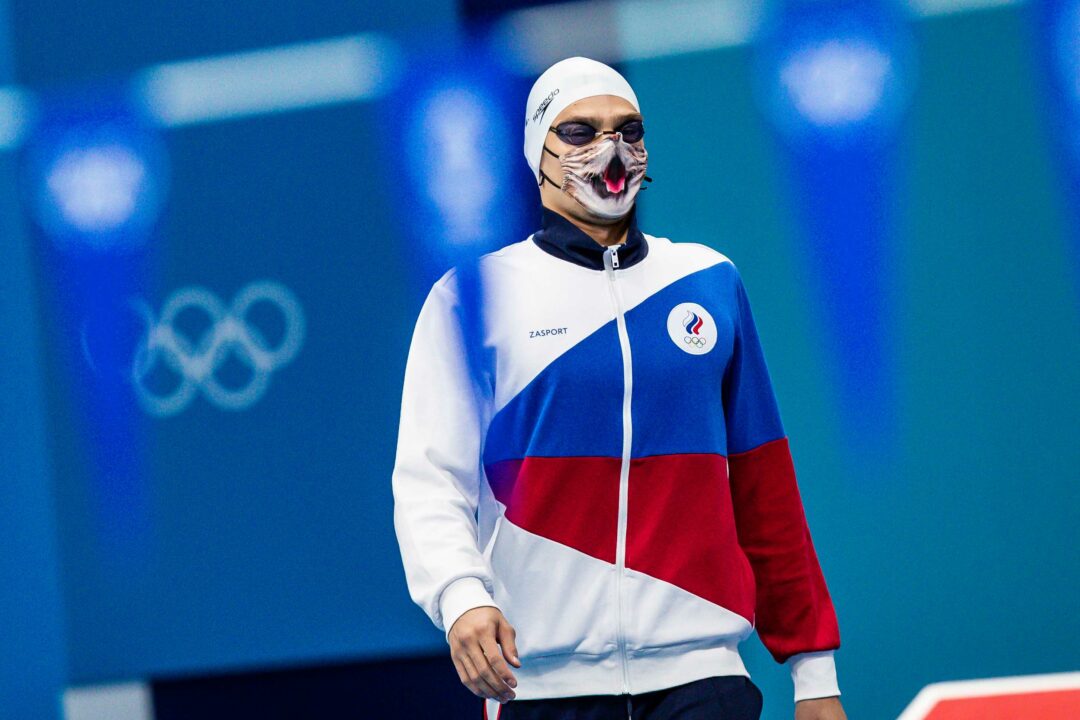 The ban comes after Rylov appeared on stage at a pro war rally in Moscow in March. Stock photo via Jack Spitser/Spitser Photography

FINA has announced that Russian backstroke star Evgeny Rylov is serving a 9-month suspension from all FINA sanctioned competitions and activities.

The ban comes after Rylov appeared on stage at a pro-war rally in Moscow in mid-March. Rylov, who won Gold in the men’s 100 and 200 back at last summer’s Olympics, was celebrated on stage along with other Russian medalists before Russian president Vladimir Putin took the stage to speak on the “special operation” in Ukraine. The “special operation” is in reference to Russia’s invasion of Ukraine, which began in late February.

FINA was vague in its description of Rylov’s actions, referring only to “Mr. Rylov’s attendance and conduct at an event held at the Luzhniki Stadium in Moscow on 18 March 2022.”

UPDATE: FINA has confirmed that the March 8 date listed in their original press release was a typo, and they were referring to the March 18 event.

Following Rylov’s appearance at the rally, Speedo ended their sponsorship deal with the 25-year-old. Rylov then announced in a lengthy Instagram post that he would be pulling out of this summer’s World Championships, although that ultimately turned into a symbolic move by Rylov, as FINA would shortly thereafter ban all Russian and Belarusian athletes from the 2022 World Championships.

In FINA’s press release today, the organization also confirmed that Russian and Belarusian athletes will be barred from any FINA events through the end of 2022. That notably bans those athletes from both the 2022 World Championships in Budapest this summer, as well as the SC World Champs, which are tentatively set for December 17-22, at a location TBD.

Although Rylov appeared at the pro war rally on March 18th, FINA announced that his ban began on April 20th, and therefore the ban will be in effect through January 20th, 2023.

“The FINA Bureau met today and acknowledged the decision of the FINA Disciplinary Panel to suspend Evgeny Rylov (RUS) from all competitions and activities organized or sanctioned by FINA, including any International Competition on the FINA World Aquatic Calendar, for a period of nine months, following Mr. Rylov’s attendance and conduct at an event held at the Luzhniki Stadium in Moscow on 18 March 2022. Mr. Rylov’s suspension took effect on 20 April 2022.”

Considering the current conditions in Russia do we know if his participation was voluntary in the rally?

Did Evgeny have a choice?

Although most in the West agree with the sentiment of sanctions against Russian athletes, oligarchs, and various facets of the Russian economy, it won’t change the course of the invasion. The ruble is currently back to near the level it was before the invasion, sanctions have angered the Russian people, but more against the West than Putin. The oligarchs do not have the power in Russia compared to the tech oligarchs in the United States. The structure of government in Russia is completely different.

This is an invasion and humanitarian crisis I strongly disagree with. It was the wrong decision by Putin. In the end, the people who get hurt are not those who make geopolitical decisions. Putin will not… Read more »

It’s hard to make sense of your post not knowing who you are. It sounds reasonable and humane and caring about saving lives of people. But “peace for territories” that is exactly what Putin’s strategy was. He didn’t plan long war and didn’t want to fight locally at Donbas region where Ukrainians were expected military actions and were prepared somehow. The plan was to scare to detach the Ukrainian government by short effective attack on capital and then do exactly what you are proposing: negotiate the peace for territories. If current Ukraine government does it it can say goodbye to their chairs or may even receive a death threats as traitors. By some information coming from Europe the EU countries… Read more »

Excellent response. You’re right. The multiple pieces involved in peace negotiations are extremely difficult. Zelensky is caught in the middle, as if sucked into a vortex between Russia, the EU, and the U.S. Keep in mind that he’s not a choir boy, either. Ukraine is close behind Russia when it comes to corruption. He ran as a reformer, but Ukraine’s corruption index score remains bad….real bad.

Back to the point about sanctions. They can work, but not to level most prefer. Again, it seems to hurt the wrong people. That said, these sanctions are the most I’ve ever seen, and coupled with a masterful and relentless information warfare/propaganda campaign from the West, you would assume a devastating effect….but…Putin is… Read more »

Agree with parts of this, and disagree with others. But all in all, a very thoughtful reply.

It’s a tough situation all around. My instincts say put full support into the sanctions, but when you get into the actual reality of the situation, it’s not that simple.

Moreover, although Russia’s economy is relatively small and not diversified, their debt to GDP ratio is usually around 13%-18%, which puts them in a much better financial position than most realize. Here in the U.S., where we have a huge, robust, diversified economy, our debt to GDP ratio is around 120%-125%, and growing rapidly. We can take all sorts of shocks becauae we’re so big and can print money, but it all adds up years from now.

Putin was raised in the old Soviet Union, where they spent… Read more »

I think russians should be scared to leave the country. Seriously, if any of my compatriots see a russian dude, who in addition is an active supporter of Z-crap, he’s going to be severely beaten right there. It’s not easy to really feel our pain being a citizen of US or EU, but believe me – there’s no stronger feeling right now than our hate against anything russian. FINA is saving their lives.

for the first time ever fina is doing something right hahah

Would love to know the financial calculus of all this. He loses his Speedo sponsorship, probably other lesser sponsorships. How much did/does he get from the Kremlin for wearing the Z at the Putin event? As an aside, it’s just insane to think that Hitler got to host the Berlin games.

At that time Germany was a happy place. There was no yet the sell of Czechoslovakia. The country was out of crises, there were jobs and economy was on the rise. Finally there was an order that German people are so famous of. Those who were smart understood what this order was going to lead to and fled the country. For other 11 million of “believers” it took less than 9 years to perish.

Also… the entire world was antisemitic in 1936. Until he actually invaded another country, everyone was sort of okay with his rhetoric.

If true, there’s going to be a slew of suspensions for American athletes who supported America during Afghanistan, Libya, Yemen and the next wars

Even if this were a thing, none of them celebrated on a stage before the president came out

Which American swimmers appeared on stage in rally to support those wars?