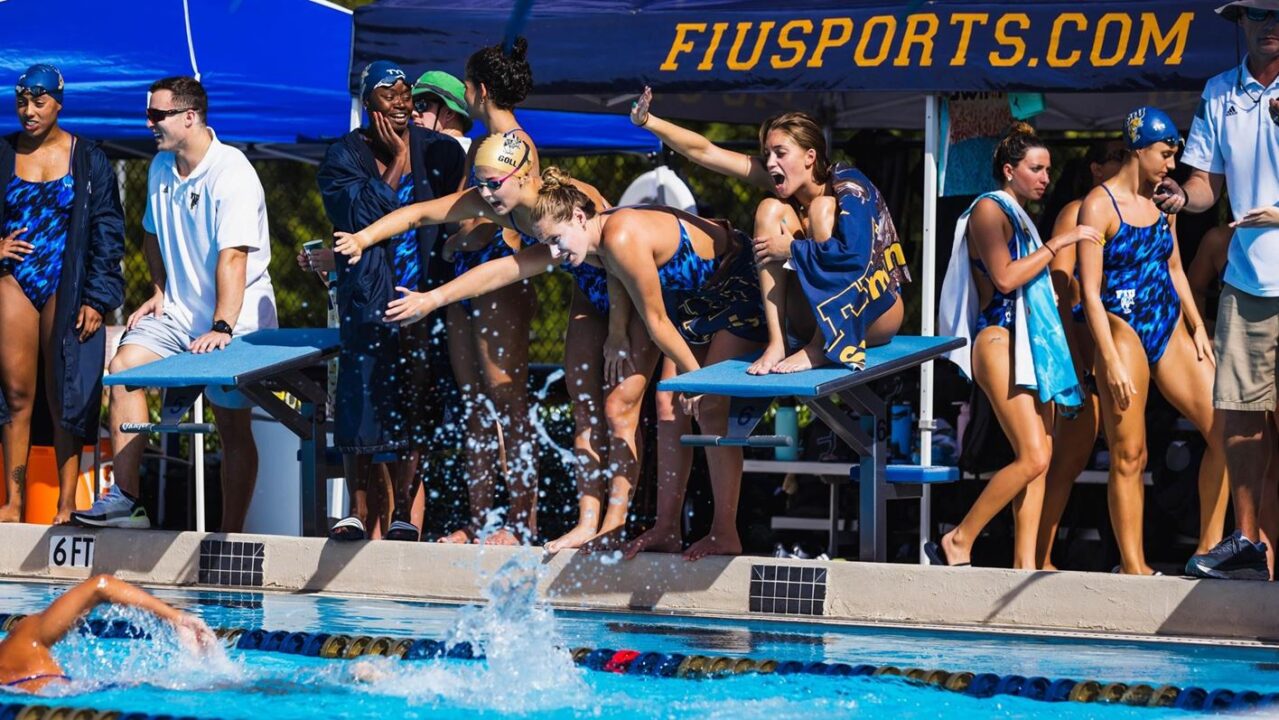 FIU opened the 2022 Conference USA Championships with a victory in the 200 medley and 800 freestyle relays, breaking the meet record in the former. Archive photo via Michael Berlfein (FIU Athletics)

Day one of the 2022 Conference USA Championships opened up with the women’s 200 medley and 800 freestyle relays. As predicted by the Swimulator, there is already a tight battle brewing between  Florida International University (FIU) and Rice University, with the teams only separated by 12 points currently.

FIU started their weekend by winning the 200 medley relay in commanding fashion. The team of Michaela Trnkova, Sara Gyertanffy, Julia Miranda, and Elinah Phillip combined for a time of 1:36.79, winning the race by almost 4 seconds. Notably, Phillip’s closing 50 freestyle split of 21.88 was the fastest in the field by a half second. The team’s time also took down the meet record of 1:36.84 set by SMU back in 2012. Rice managed to finish second with a time of 1:40.27, just ahead of Marshall’s time of 1:41.40.

After dominating the 200 medley relay, the FIU women also claimed the top time in the 800 freestyle relay. The team of Stephanie Hussey, Christie Chue, Lamija Medosevic, and Julia Miranda touched in a final time of 7:11.78 to cut almost 4 seconds off of their entry time. In a similar fashion to the medley relay, Rice finished second in a time of 7:15.58, with Marta Cano Minarro anchoring in a split of 1:46.83. FAU’s team got into the wall third, finishing with a time of 7:21.58.

During the time trial session, there were also several notable performances. FIU 5th year swimmer Stephanie Hussey dropped a time of 52.71 in the 100 butterfly shortly after leading off the 800 freestyle relay. Her performances beat her best time of 55.87 by over 3 seconds. In the 200 butterfly, Rice’s Sydney Morgan dipped under the 2:00 barrier, swimming a time of 1:59.04. Morgan also dropped significantly off of her best time of 2:00.89, which she just swam at the Texas v. Rice dual meet earlier this month.