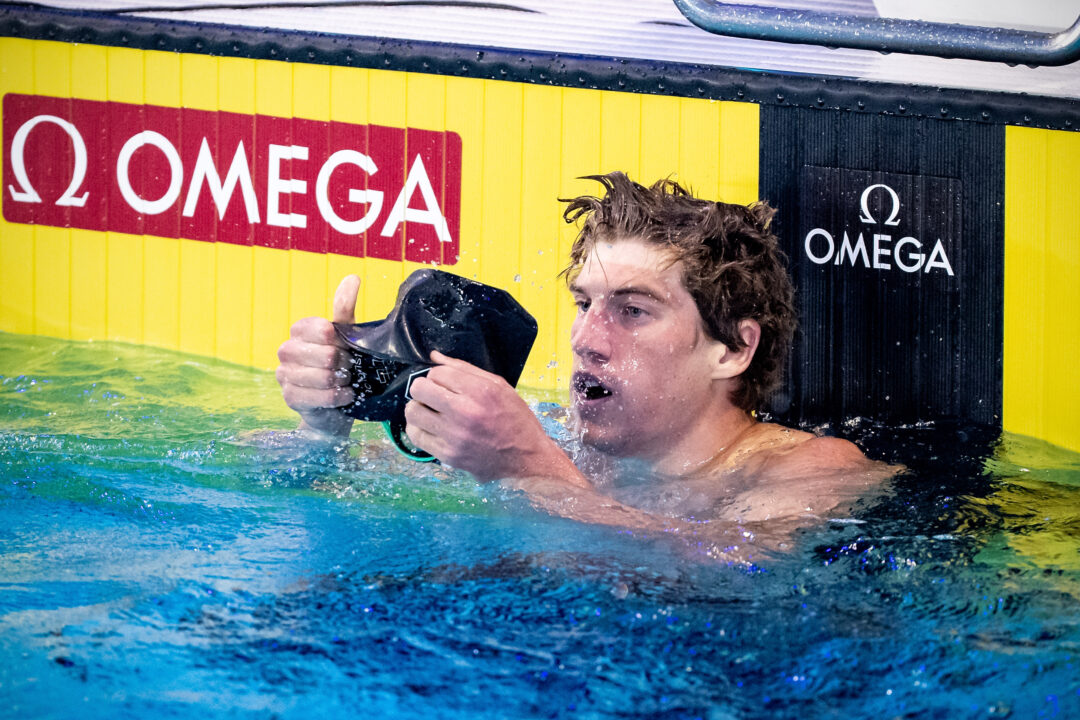 We kick off this session with defending Olympic champion Kaylee McKeown, who is the top seed in the women’s 200 back. She swam a relativley pedestrian time of 2:11.57 this morning, but expect her to be must faster considering her trend of dropping significant time from prelims to finals this meet. This race will also be short course 100 back world record holder Minna Atherton‘s last chance at making the Worlds team.

Some other big races that we will see include the men’s 400 IM, where Olympic bronze medalist Brendon Smith leads the pack. He was over ten seconds off of his Australian record of 4:09.27 this morning, swimming a time of 4:21.86 in prelims. However, it was still fast enough for him to be the top seed, with Kieren Pollard, Se-Bom Lee, and Elliott Pogerson following him close behind.

Perhaps the biggest battle of the night will be in the men’s 100 free, with a field of stars including 16-year-old phenon Flynn Southam, who was just 0.02 off his Australian age group record in prelims. William Yang tied him as the top seed, as they both swam a time of 48.62 in the heats. Jack Cartwright was the third sub-49 swimmer, being the third seed with a time of 48.66, while Tokyo 4×100 free relay member Matt Temple came in fourth. This race will be a good opportunity to gauge how the Aussie men’s sprint freestylers will fare at Worlds without Kyle Chalmers.

Finally, in the women’s 1500 free, we will get to see a race between Australian record holder Maddy Gough, as well as 800 free qualifiers Kiah Melverton and Lani Pallister.

Although Mollie O’Callaghan led after the first 50, defending Olympic champion Kaylee McKeown turned on the jets in the back half of her race, splitting 1:02.29/1:03.02 to take the win. Her time of 2:05.31 is a bit off her season-best time of 2:04.68, but still good enough for fourth-fastest in the world.

O’Callaghan swam a new personal best time of 2:08.48 to qualify for her fourth individual event, after qualifying in the 100 free, 200 free, and 100 back earlier this meet. For a little bit on the final lap, it seemed that short course 100 back world record holder Minna Atherton was going to catch up to O’Callaghan, but she fell behind to take the third spot- meaning she will not qualify to present Australia at worlds this summer.

Csongor Cellie took this race out very fast from lane 2, splitting a 54.77 to lead the race by a considerable margin at the 100 mark. However, Bowen Gough had a very strong back half to pull ahead of the field and win the race by over one and a half seconds, being faster than the FINA ‘A’ cut as well. Gough finished in third in this event last year by less than half a second, and he redeemed himself this time around to book a ticket to Budapest.

Alabama swimmer Charlie Hawke and 200 fly Tokyo Olympian David Morgan also came up ahead of Csongor in the second 100, with only 0.39 seconds separating the two of them. However, neither swimmer was under the FINA ‘A’ cut and will not qualify for worlds.

Csongor ended up falling to fourth place, finishing with a time of 2:00.50.

Australian Record holder Holly Barratt became the oldest woman to win an Australian national title at 34 years of age, winning the 50 fly with a time of 26.02. She was the first off the blocks with a reaction time of +0.64, and led from start to finish to take the win. Alexandria Perkins finished second in 26.18, also being under the FINA ‘A’ cut.

The 50 stroke races at these trials do not decide who qualifies for worlds and Commonwealth Games, as selection is up to the discretion of Swimming Australia. However, if Barratt ends up making the team, she will close off her career on a high as she plans on retiring at the end of 2022.

Olympic bronze medalist and Australian record holder Brendon Smith successfully defended his national title in the 400 IM, winning the race by nearly three seconds. He took the early lead in the butterfly portion of the race, splitting 56.68 on his first 100. However, Se-Bom Lee began to challenge him in the backstroke and breaststroke leg. He actually outsplit Smith in backstroke with a 1:03.54 leg, and was just 0.35 slower than Smith on breaststroke.

Smith widened the gap on freestyle, splitting 57.61 on his last two laps. Kieren Pollard began coming up on Lee in freestyle as well, and for a second it seemed like he would overtake him. However, Lee won the race by just 0.01 seconds to qualify for his second individual event, as he qualified for the 200 IM alongside Smith earlier on the meet.

800 free champ Lani Pallister made it a sweep in the distance events when she won the 1500 free with a personal best time of 15:55.40, being the only woman in the field under 16 minutes. She took the race out very fast, being well under Australian record pace in the first 500 with a fast opening split of 5:12.96, but then slowed down after that. However, she still dominated the race by leading start to finish.

Moesha Johnson was second in a time of 16:00.74 under the FINA ‘A’ cut, qualifying for her first pool event at worlds after making the team in the 5k and 10k open water races. Australian record holder Maddy Gough was off her personal best time and finished third, missing the Worlds team.

Flynn Southam was a bit off his prelims time of 48.62, but qualified in with a time of 48.76 and will also make the worlds team in the 4×100 free relay. Jack Cartwright and Matt Temple finished fourth and fifth respectively, most likely qualifying for the same relay. 17-year-old Dylan Andrea also has a chance of qualifying, sneaking in a sixth-place finish just 0.01 seconds behind Temple. Andrea also saw a massive drop in time in both prelims and finals. His previous best time before this meet was a 50.46 from April 2021. He lowered it to 49.42 in prelims before swimming a 49.12 in finals.

Cody Simpson, who was originally DQed in prelims but got the DQ overturned, finished eighth with a best time of 49.34, a bit faster than his morning swim of 49.43.

Very impressed by Kaylee and Mollie at these Aussie trials… and Titmus too. In fact a whole range of swimmers have been doing so well. It seems there have been a lot of PBs at this meet, even from the more seasoned swimmers.

The versatility amongst the top women is great to see – add in McKeon to that list, Meg Harris likely expanding her experience. They have a good team.

The US are the only country that has the depth in all distances, strokes & gender.
Australia are very strong in some areas & fall away elsewhere, juts like most other countries.

We’ll get a better idea in the 200 IM tomorrow, but is it possible that McKeown’s increased IM focus has taken just a little bit of edge off her backstroke?

She’s just in the middle of the endurance phase of her training and went straight in to a taper only a few days ago specifically for the 400IM and training through the trials otherwise.

W200BK: McKeown did what was needed and little more. Despite being WR over the shorter distance, this seems her stronger event. The Americans HAVE “trimmed her margin” this year so she will need to bring her A game to Budapest. Solid PB for MOC but this may be one that she may do well to “pass on” this year for the intl meets.

M200FLY: Was only really expecting Gough to make the QT and so it played out. Will go into Budapest with minimal external expectations; hope he makes something of it.

M400IM: Smith was solid rather than spectacular but got the job done. Lee tried to take the race to… Read more »

bruh there not gonna medal in the 400fr relay. hopefully they can get their relay to the level it was a few years ago by 24

Jack Cartwright unfortunately did not make the Tokyo Olympic team.

Men’s 100fr a tad disappointing for me – Even a Chalmers special won’t be enough to deliver a 4×1 medal if US/GB/ITA deliver.

Without Chalmers that relay may not final.

Sounds like a Hungarian name in which case the etiquette is surname first, first (given) name second