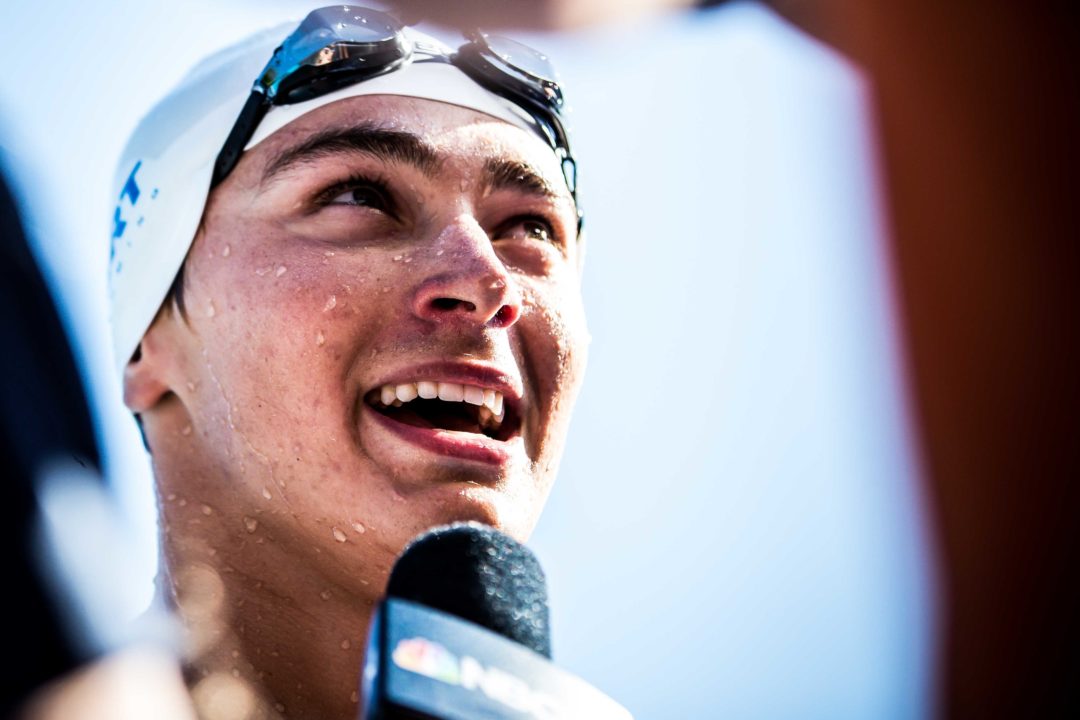 After Michael Phelps represented the US at 5 consecutive Olympic Games, the men’s 200 fly is wide-open at Olympic Trials, with a field led by Luca Urlando. Archive photo via Jack Spitser/Spitser Photography

In 2016, Michael Phelps made his 5th straight US Olympic team in the men’s 200 butterfly en route to an Olympic gold medal performance. In fact, the medal marked his 4th straight in the event, making the podium every year since 2004. With Phelps’ retirement, the United States has a large hole to fill, especially in this event, where no Americans made the podium at the 2017 or 2019 World Championships.

In 2017, Pace Clark and Jack Conger represented the US at the World Championships. At the time, Conger seemed to be an imminent heir to Phelps’ throne as he finished 5th overall at Worlds in a time of 1:54.88, while Clark failed to make it past the semi-finals. However, Cogner has not hit a best time in the event since 2017 and failed to qualify for the event for the 2019 World Championships. Clark, meanwhile, has since retired from the sport of swimming, last registering a swim at the PSS meet in Knoxville in 2019.

Since 2018, the fastest American in the event has been the University of Georgia’s Luca Urlando, who posted a time of 1:53.84 at a Pro Swim Series stop in June 2019. Urlando, the 2019 Junior World Champion, was unable to race at the 2019 World Championships due to the fact that the United States contingent was selected at the 2018 National Championships, where he finished 3rd.

Although Urlando has recently been hindered by shoulder issues after dislocating last summer, he is still in the prime position to make his first US Olympic Team, especially if he can near his lifetime best at trials. Urlando’s season best currently stands at a 1:57.21 from the Georgia Invite.

At the same competition, Cal’s Trenton Julian had a breakthrough swim, winning the event in a personal best of 1:55.77. His time currently ranks him first in the nation, leading the rankings by over a second. Julian’s performance places him as the 7th-fastest American since 2018. Internationally, Julian represented the US at the 2019 World University Games, finishing 13th in the 200 butterfly and winning a gold medal as a member of the 800 freestyle relay.

Although he traditionally focuses on the IM events, Georgia’s Chase Kalisz is also in the conversation for an individual spot in this event. Kalisz owns a personal best of 1:54.79 from the 2017 US National Championships, and has already been as fast as 1:56.90 this season to rank second in the country behind Julian. However, with such a tight field in the IM events, Kalisz may elect to focus on them instead, as he was the 2017 World Champion in both the 200 and 400 IM. Likewise, Cal standout Andrew Seliskar may also be a threat, but may elect to focus in the 200 IM and 200 freestyle, where he is amongst the top swimmers in the country as well.

Another Georgia standout, Gunnar Bentz, may also be in the position to challenge for an Olympic team spot. Bentz recently swam a time of 1:57.64 in the event at the 2021 Longhorn Invite, ranking him 5th in the country for the season. In 2016, Bentz represented the United States as a member of the 800 freestyle relay, earning a gold medal via his prelims performance.

Since 2018, the primary international US representatives in the event have been Zach Harting and Justin Wright. Both Wright and Harting represented the United States at the 2019 World Championships and 2018 Pan Pacific Championships. Since 2018, Wright and Harting rank 2nd and 3rd, respectively amongst Americans with times of 1:54.63 and 1:55.05. This season, Harting ranks 5th in the country with a time of 1:57.64, while Wright holds a season best of 2:00.25. Unless he can muster up his fastest performance since 2018 in the event, Wright may be on the outside looking in during the final in Omaha, as there are several young athletes hovering in the 1:57-range.

Just ahead of Harting in the national rankings for this season is 22-year-old Connor LaMastra, who swam a best time of 1:57.49 last week. With his swim, Lamastra destroyed his previous best of 1:59.56, earning his first Wave II Olympic Trials cut in the process. If he has another drop in store, Lamastra may be able to make the final in Omaha, or even make the Olympic team in the event.

Like Lamastra, Arizona’s Brooks Fail also recently swam his way into the Olympic team conversation, dropping a second off of his best time to finish in 1:56.18. With his performance, Fail became the 2nd fastest American this season, behind the aforementioned Julian.

There are also several collegiate stars that may have an impact upon the field, including Miles Smachlo, Jack LeVant, Nicolas Albiero, and Sam Pomajevich. Albiero specifically should be a threat given his recent performances in the event, as he holds a season best of 1:57.86 from Des Moines that ranks him 10th in the country this season. In addition, Albiero is currently the 4th-fastest performer of all-time in the yards version of the event.

Tom Shields was the other US representative in the event at the 2016 Olympic Games, besides Phelps. However, since then, he has been relatively inconsistent in both national and international competitions. At the Atlanta Classic, Shields was only 2:00.92, barely sneaking into the final. Recently, Shields appears to have shifted his focus to the 100 butterfly, posting a time of 51.55 in Atlanta. Shields holds a best time of 1:55.09, which would sneak him into Olympic consideration, but the field may simply be too fast for the veteran.

Dark Horse: Matthew Fenlon is currently one of the top age-group prospects in the country, ranking #10 in SwimSwam’s rankings of the class of 2021. Fenlon holds a best time of 1:57.39 from 2019, but has already been as fast as 1:59.31 this season at the PSS meet in San Antonio. Given his young age, Fenlon could see some major drops come Omaha, which may push him into the final.

Wave I Standout: Princeton University commit Conor McKenna currently holds a lifetime best of 2:00.13, falling within .4 of the Wave II cut of 1:59.63. However, his short course best of 1:45.02 converts to a 1:59.44 in long course using the Swimulator, meaning McKenna most likely has more room to improve his time.

Massive disrespect to Shields. He will final and be right there at the end.

He may not even choose to has it as a primary event. He is getting older and seeming to shift more towards sprint. That is what his times are showing, thats not disrespect

He broke the American record in SCM in ISL not too long ago. He’s looking good.

The 200 fly was my best event. I loved swimming it. I love watching it. When Phelps came along, I was mesmerized by his talent and longevity. Now, I keep looking for some American to stand on Olympic podiums in the event, some promising young swimmer with solid times and the youth to improve on them. I thought it might be Seliskar. Directly out of high school, he did a couple 1:55s (LCM). But, things went differently in his swimming career. Finally, Urlando came along with a couple 1::54s and that 1:53.8 at 17. I’m not giving up on Luca. My fingers and toes are crossed!

1988, no American on the podium. A certain admin on this site, who was but a fresh faced teenager at the time, might remember the final very well…

Word has it LaMastra is growing a mullet. So look for him to drop at least 15 more seconds.

You would think Luca should be MUCH faster than isntime from 19 when he was only 17….puberty alone?

Dislocated shoulder multiple times has definitely put a damper on his progress, it’s a lot easier to train kicking and do the underwaters for a 200 fly SCY than it is to grind through a 200 fly LCM. Still, would predict at least a 1:54 high at trials to make the team.

Were there multiple incidents? I only heard about one…?

LaMastra is known to have the worlds largest nose clip collection that gives him special powers. Look for him to wear at LEAST 6 during finals to shoot him into the top spot.

6 at the same time? Or will he rotate mid-race?

His injury cost him a lot this season

yes because he had such a disastrous freshman season…

He got PBs lol.