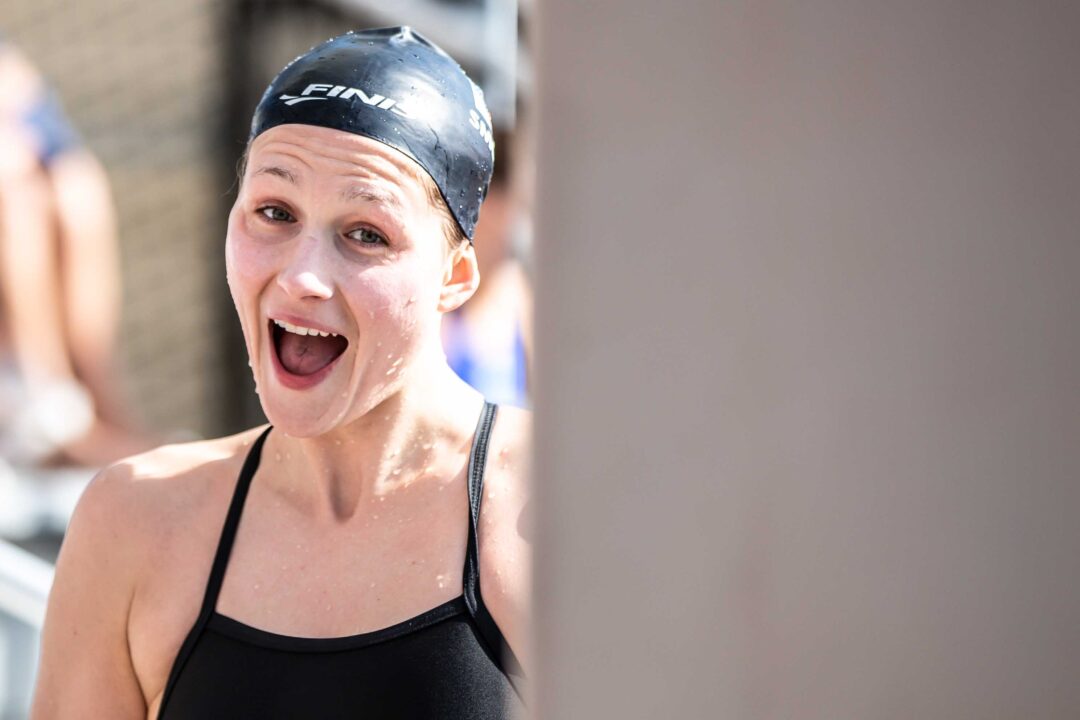 Between the European Championships, the Atlanta Classic, the 2021 Sydney Open, and the Indianapolis stop of the 2021 Pro Swim Series, May showcased intense competition among the world’s top female backstrokers. Though they were dispersed throughout multiple competitions and continents, four of the the times posted were faster than Katinka Hosszu‘s gold medal performance at the 2016 Rio Olympic Games where Hosszu won in 58.45.

This article is not meant to be a speculation on who is most likely to win gold in Tokyo–you have to wait another month or so for that one. Rather, this article is focused on the speed and depth that has developed in the women’s 100 backstroke since the 2016 Rio Olympics. Let’s take a look.

Australia’s Kaylee McKeown blasted a 57.63 in the 100 LCM backstroke, just missing Regan Smith‘s 2019 World Record by 0.06. Five months earlier in December 2020, McKeown became just the second woman in history to dip under 58 seconds with a 57.93 in the 100 back. Smith has been hitting 58s casually for years now though has only been under 58 once. Since setting the World Record in 2019, Smith’s fastest 100 backstroke has been a 58.18 in March 2020, which is tied as the 11th-fastest performance in history.

In Atlanta, Olivia Smoliga and Rhyan White blasted new lifetime bests of 58.31 and 58.43, respectively. Smoliga and White currently rank 3rd and 4th in the world following this performance. Adding to the onslaught of American depth in the event, Smith posted a 58.77 in Indianapolis, and 16-year-old Claire Curzan dropped a 58.82 in North Carolina.

For further comparison, Kathleen Baker won the Olympic silver in 2016 with a 58.75, while Kylie Masse and China’s Fu Yuanhui tied for bronze in 58.76.

At British Trials in April, Kathleen Dawson put up a 58.24 in the 100 backstroke, making her the 7th-fastest performer all-time. Dawson then swam the 100 backstroke 6 times at the European Championships in Budapest, producing 4 efforts that were faster than Hosszu’s 2016 gold-medal swim. Dawson ended the European Championships with a 58.08 lead-off for Britain’s 400 medley relay, shooting her up the ranks to the 4th-fastest performer all-time.

The table below shows only the fastest performance by each of the women that have been faster than Hosszu’s 58.45 in 2016. Smith, McKeown, Masse, and Baker have each been faster 58.45 on numerous occasions. Up to 5 of the women listed below could face off in the final of the 100 backstroke in Tokyo. Four of them–Smith, Baker, Smoliga, and White–are American, and the herd will be thinned in Omaha.

Hopefully the 2 American survivors in that event will be able to swim their fastest times in the final of Tokyo.
In all events the key at trials is to qualify at 90% and save the big taper for the olympic games. Of course only the stars with some margin can allow that luxury. MP and his coach were masters to do it. I see only Katie Ledecky have that luxury this year. Lilly King doesn’t have enough margin in the 200 breast. Caeleb Dressel has a big adversity in the 100 free. Simone Manuel knows how to peak at the right time but this year she has new young opponents able to bother that tactic. I hope that… Read more »

She has no serious International competition in the W 800 FR & the W 1500 FR really.

Can swimswam find some statistics on this?

Smith & Smogs are going to Tokyo.

Regan Smith is fully vaccinated. Smart decision on her part.

Why is death rate the only rate we measure when it comes to COVID? Lets say you went swimming in the ocean one day and got bit by a shark, you didn’t die fortunately but instead you got your leg bitten off. So by youre logic there is nothing wrong with you now and you shouldn’t take precautions because even though your quality of life has suffered, and you know lost a leg, youre still alive so thats all that matters. Sounds like you never had the mumps, measles, pertussis, polio? Because death rate wasn’t particularly high but these, now preventable illnesses, had the ability to leave lifelong afflictions. But hey they didn’t die so its fine i guess. Caught… Read more »

Duke Trujillo had an immune system

U are right very unlikely she would be harmed by it. However if she gets it she would be banned from competing so that would be pretty bad for her.

If death is your only motivating factor then do you only eat once a month? Only drink water once every three days? If 70% vaccination gets us to no longer wear masks and you are against vaccinating and therefore you never want to stop wearing masks? Or meeting in large groups. Maybe you just really don’t like people getting within 6 feet of you.

It would have been easier for you to type: Ignore me. I just don’t get it.

Did you miss what happened to Ella Eastin? COVID ended her career.

It is a very smart decision on her part. Regan is 19. I’ve been very impressed that even younger Americans have been getting vaccinated at accelerated rate. Very quickly it has reached 6.1 million aged 12-17 who have received at least one dose. Survival is hardly the only variable. The key is to avoid the virus completely. I’ve emphasized that for more than a year. You’ve got to be a rank moron not to understand that vital organs are being attacked. Even if they are strong enough for immediate survival they can be compromised toward later complications and possibly early death. It is guaranteed that the down the road health problems from coronavirus will be worse than projected. With a… Read more »

You’re preaching to the choir.

Im just baffled that Kaylee isnt swimming the 400 medley……weak in comparison, Hosszu is done. And should have no problems backing up for the 100 at her age and stature. No way if she was American she wouldnt be swimming and winning that 400. Aussie swimming has turned soft

if you want a better comparison, agnel dropped the 400 free for the same reason

How in any way is that a comparison

It’s her first olympics . She has brilliant chances to medal,and perhaps win, three other events. Plus be on two medaling relays possibly. Let it go

Let what go? 400 medley is the weakest of the events as Ive already mentioned

how did multiple events go for “female michael phelps” Katie Hoff at her first Olympics?
3 individual events + multiple relays is more than enough

Prediction: four girls break 58 at US trials and winner sets world record. Probably the most competitive race of the meet.

I have a feeling like the men’s 200 free might be slightly more competitive, as so many men can qualify this year and there is no real favorite, which is something the women’s 100 back definitely has. But this will probably be the most competitive race on the women’s side.

I’m on the side of the womens 100 back here. I think it matters that they’re better than the 200 free men. Smith is the favourite but I don’t think that counts for very much in this race.

4 under 58? Only regan smith would go under 58, I don’t see anyone else doing it

You don’t think Smoliga drops 0.3 from a meet 5 weeks out?

Same story for the men’s 100 free lately, where people now are going times that are faster than the 2016 gold medalist. This meet is going to be the fastest in the history of swimming. Overall, even faster than the 2009 world champs. I am hyping myself way too early but the thing is I have been hyped since 2019 world champs ended.

My general expectations are that the sprints will be fast across the board because covid has given short distance swimmers more time to experiment with rest/taper. However, we might see slow results in longer events or at least results that show lack of depth (e.g 16min making the finals in the women’s 1500, or fast finals but slow semis in certain events)