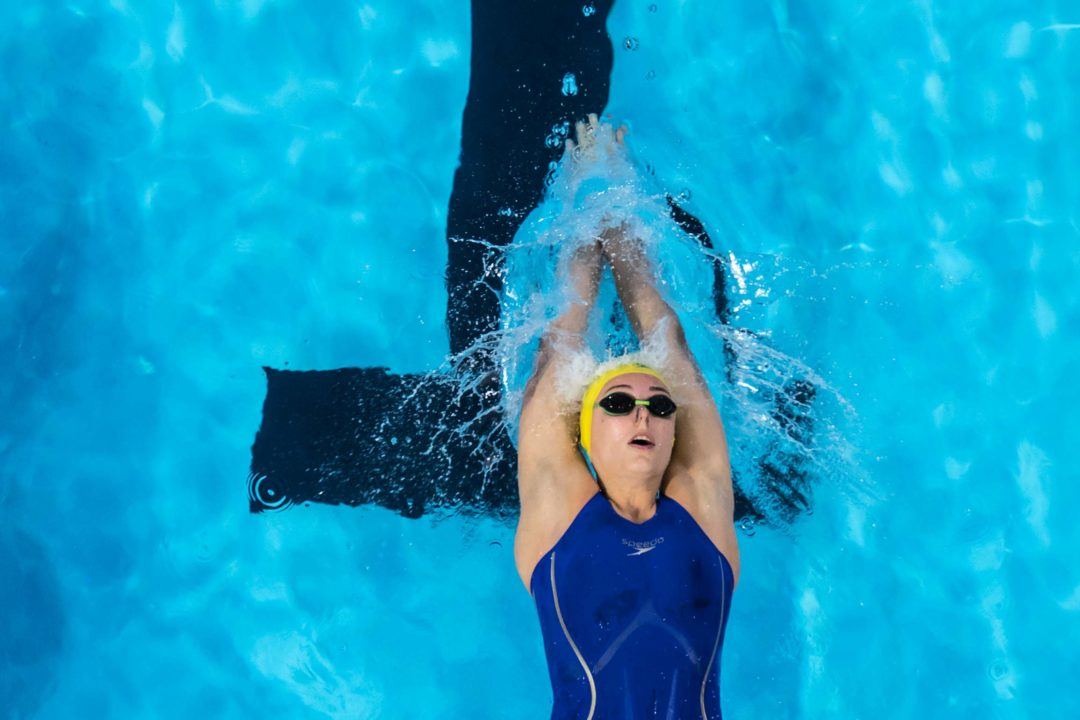 19-year-old Minna Atherton is coming back to her junior ranks form, dipping under the 59-second threshold for the first time ever in the women's 1back. Archive photo via Mike Lewis/Ola Vista Photography

The women’s 100m backstroke saw 3 women dip under the 59-second threshold during tonight’s semi-final in Gwangju, Korea, led by Canadian former World Record holder Kylie Masse. The National Record holder for her country fired off a time of 58.50 to lead the top 8 heading into tomorrow night’s final, but 2 Aussies are in hot pursuit.

19-year-old Minna Atherton and 18-year-old Kaylee McKeown shut Australian National Record holder and 2015 World Champion Emily Seebohm out of qualification for this year’s World Championships. Both sit in the top 5 seeds behind Masse after tonight’s semis, with Atherton ranked 2nd in 58.60, just .10 behind Mase, while McKeown is ranked 5th in 59.13.

For Atherton, training partner of Seebohm, the Brisbane Grammar athlete is harking back to her early teenage days, when she broke the 50m and 100m back World Junior Records when she was just 15.

She hit a mark of 59.20 for a new lifetime best at the Aussie World Trials this past April to take the meet title and was near that in 59.22 for the 2nd seed after this morning’s heats.

Flash forward to tonight, however, and Atherton entered new territory, dipping under 59 for the very first time. In doing so, Atherton’s time of 58.60 frog hops Olympic finalist Madi Wilson to become the 2nd fastest Aussie performer in history in this women’s 100m back event. It also makes Atherton a very real medal threat for tomorrow’s final.

All-Time Aussie Women Performers in the 100 Back

I’m really impressed with Minna’s performance so far! I was a bit worried when she said that she “tapered” for the trials 5 weeks ago but she still has so much more in her!

I’m also still amazed how far she’s come and that I was racing alongside her back when we were 12!

Her turn and underwater swim were very impressive, it’s very rare to see in women’s competition these two to be a big factor.

Australia seems to be in great shape as a team, at least up to now:

– Titmus The Queen
– CR for freestyle female relay
– medal for men’s relay with great effort from Chalmers
– sub-1.45 for Lewis in semifinal
– Atherton at 58.6 in semifinal
– McKeon with good performance on 100m butterfly

Some suprisingly sensational results from Aussies.

So I wouldn’t be suprised if she can go even deeper than 58.5, but challenging Masse will be troublesome to anyone.

Yeah I’m amazed how well the Aussies are doing so far! I had some doubts coming into Worlds, especially that trials were so close and there were plenty of surprises then.

Personally, I’m most impressed with Lewis. I think we all, including myself, had eyes on the middle lanes (Chalmers and Sun) but Lewis took it out from lane 1! I’m looking forward to watching the finals for this one and hope the pressure doesn’t get the best of him.

I hope she can medal but it will be a tough final .. o hope Kaylee can break 59s tomorrow night as well