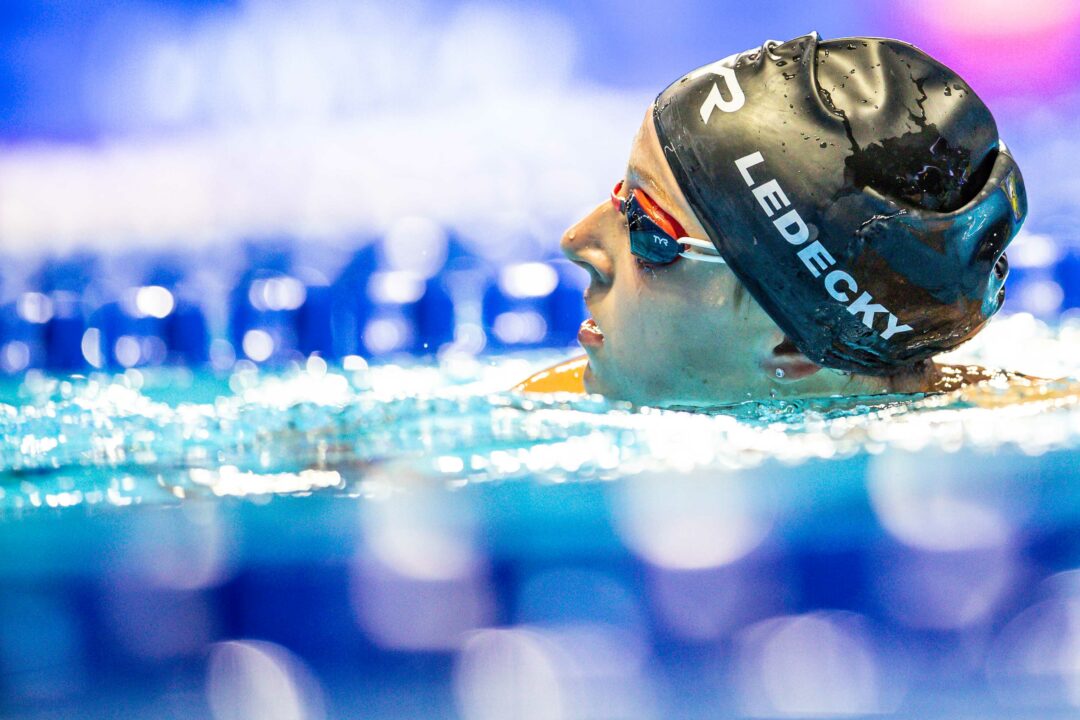 There are just two sessions left in the U.S. Olympic Trials – finals tonight and finals tomorrow night. Here are a few big storylines to watch for tonight:

The Race Against the Roster Cap

We’ve been tracking Team USA’s likely Olympic qualifiers each night to make sure the full list of potential Olympians (top two in every event except the 100/200 frees, where the top 6 can qualify) will fit under the FINA-mandated 26-person roster cap.

The women currently need 3 more ‘doubles’ to add every swimmer under the roster cap. It’s very likely we’ll get all three tonight: Regan Smith and/or Rhyan White in the 200 back and Katie Ledecky, Bella Sims and/or Erica Sullivan in the 800 free. (If Sims were to make that 800 free, it would also make things a lot easier on USA Swimming, which can only bring up to 12 relay-only swimmers but is currently projected to have 13, including Sims).

The men need one more ‘double’ to officially add all second place finishers to the Olympic team. We’ll likely get that one with Caeleb Dressel in the 100 fly. After that, they’ll need 3 more doubles between four 50 free and 1500 free spots to bring all 5th and 6th-place finishers in the relay events – though they’ll also have to figure out the 12-person relay-swimmer cap.

We’ve got three reigning world record-holders swimming tonight, and fans can’t help but wonder if any of the three will challenge their own all-time marks.

Caeleb Dressel isn’t likely to be fully tapered for this meet. But he did go a blazing 49.76 in semifinals of the 100 fly, easily within striking distance of his 49.50 world record. Even without being fully primed, Dressel just might be able to best his own world record with a good swim. He does have the 50 free semifinals later in the session, though, so his plan might have been to go after semifinals of the 100 fly and only do enough to win tonight.

Regan Smith was only about four-tenths off her world record in the 100 back, and seems to be swimming with a lot more confidence after locking in that first Olympic berth. She was almost four seconds off her world record 200 back in semis, but should be much closer to it tonight, perhaps even challenging the U.S. Open record of 2:05.68.

Katie Ledecky is far and away the best 800 freestyler in history. She hasn’t been anywhere near her bests this week and really has no reason to be – she’s won the 200, 400, and 1500 frees easily. But there’s still a chance tonight lines up for a statement swim for Ledecky in her last race of Trials and likely her last race until the Olympic 400 free.

How Does Simone Swim?

World champ Simone Manuel was a shocking absence in the women’s 100 free final, getting clipped in 9th place out of semis. Manuel opened up this week about a year of adversity, including a diagnosis of Overtraining Syndrome that forced her to take three weeks out of the pool from late March to early April.

Manuel bounced back to finish second in this morning’s 50 free heats, and all eyes will be on her tonight as she tries to get into the 50 free final in her last shot to make the Olympic team for 2021.

Every single final tonight has a clear-cut favorite… but also no clear-cut favorite for the second Olympic spot. In the men’s 100 fly, it’s Dressel clearly in front. But the second spot could go in any number of directions. Veteran Tom Shields is the second seed, looking to make a return Olympic trip in this event. Missouri’s Danny Kovac has looked great through heats and semis, and NC State alum Coleman Stewart is becoming a breakout fly star after mostly crushing the backstrokes in college. The dark horse is Cal’s Trenton Julian, who qualified 5th last night, but was swimming a brutal 200 IM/100 fly double – Julian might have a big drop in him with no other events tonight.

There are a bunch of big names vying for the second 200 back spot behind Regan Smith. Rhyan White was the runner-up in the 100 back, coming off two outstanding seasons for Alabama in the NCAA. 18-year-old Phoebe Bacon has been a top young Olympic contender for the past several years, and Kathleen Baker is fighting through a foot injury in her attempt to return to the U.S. Olympic team.

The 800 free is more straight-forward: it’s endurance vs speed. Ledecky is the favorite – she has both. Behind her, Erica Sullivan has the endurance – she was second in the 1500 and is an open water star. 16-year-old Bella Sims is also an open water star, but slots a little more into the speed role here after likely making her first Olympic team as a member of the 4×200 free relay.

US swimming fans need to hope Simone can take a place in the 50 free and (maybe out of nowhere) swim some amazing relays in Tokyo to help the US squads. Cos even the medley looks vulnerable without a decent 100 free swimmer.

Funny headlines of the day

Regan Smith was only about four-tenths off her world record in the 100 back, and seems to be swimming with a lot more confidence after locking in that first Olympic berth. She was almost four seconds off her world record 200 back in semis, but should be much closer to it tonight, perhaps even challenging the U.S. Open record of 2:05.68.

Katie Ledecky is far and away the best 800 freestyler in history. She hasn’t been anywhere near her bests this week and really has no reason to be – she’s won the 200, 400, and 1500 frees easily. But there’s still a chance tonight lines up for a statement swim for Ledecky in her… Read more »

I think the women’s 200 back is going to be a tight race between 3 swimmers. I hope Regan pulls it off, but she has been tightening up at the end of her races, and Phoebe/Rhyan will be right there.

Ball buster! They are all right there

What I’ve learned from watching trials
2004 trials – 1st to 2nd all strokes go to Olympics, 1st to 6th in relay events goes.
2008 Trials – Swimming a prelim or Semi only will get you on the final relay if you make the team in other events and all 6 event swimmers will be on it too.
2012 – If the winner of a relay event decides not to swim it individually at the games then 7th place makes the team and the winner still swims the relay.
2016 – Swim Swam will freak out that our prelim team won’t make it if we let the 6th place finisher swim.
202(1) – Our swimmers… Read more »

I think he’s gonna rip it in the 100 fly. Plenty of time in between plus he could probably qualify in 10 minutes rest if he had to. Might as well throw down a WR if you can.