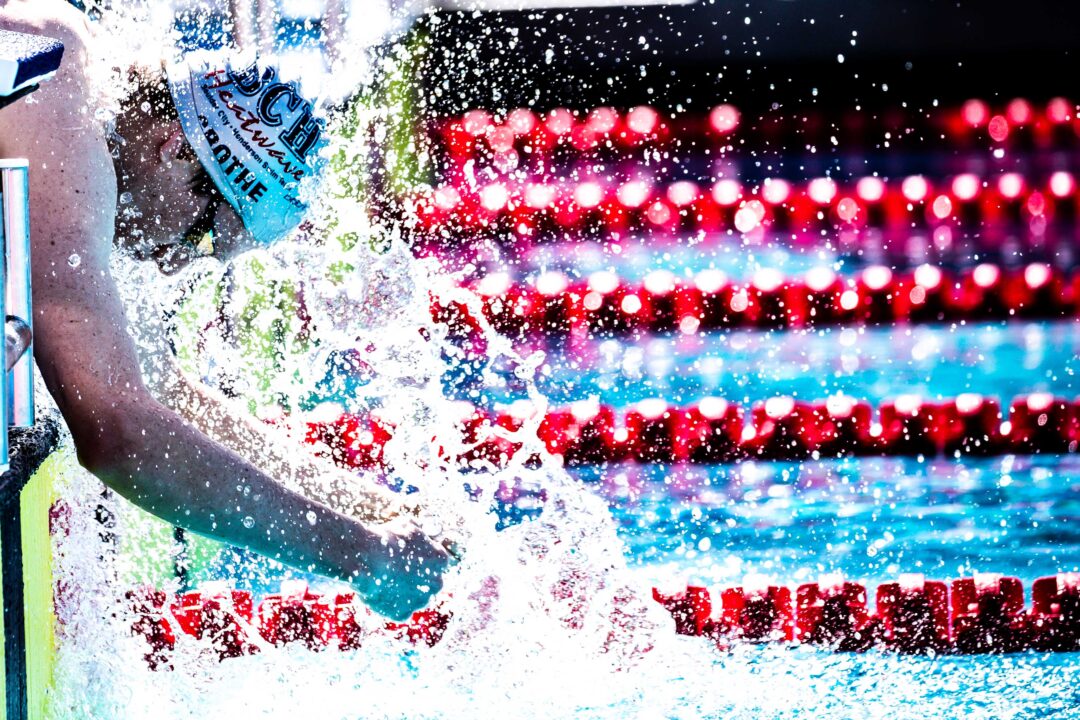 Rejoice, swims fans. Team USA will select its first swimmers for the Tokyo Olympics today, with prelims getting underway at 10am (Central). Current photo via Jack Spitser/Spitser Photography

In the immortal words of Hugh Jackman, “Ladies and gents, this is the moment you’ve waited for.” It’s been a weird and at-times tumultuous five years, but the best swimmers in the United States will once again race at the CHI Health Center in Omaha in the quest to earn a spot on Team USA’s Olympic roster. This morning we’ll see preliminary heats of the men’s 400 IM, women’s 100 fly, men’s 400 free, women’s 400 IM, and men’s 100 breast, and there’s sure to be plenty of excitement from the get-go.

The first race of the day, the 400 IM, will feature the two men who made the team in 2016 in this event, former Georgia Bulldogs Chase Kalisz and Jay Litherland. Another three finalists from 2016 are entered in the event, Gunnar Bentz, Sean Grieshop and Charlie Swanson, while Ryan Lochte scratched. Keep an eye on Carson Foster, who qualified for Trials in this event five years ago at the age of 14, and is seeded 2nd on the psych sheet, and Florida’s Bobby Finke, who won this event at NCAAs.

While Dana Vollmer has retired, Kelsi Dahlia returns after repping the USA in the women’s 100 fly in Rio (and getting married, she last competed here as Kelsi Worrell). However, she may have her work cut out for her, thanks to the meteoric rise of teenagers Claire Curzan and Torri Huske, who sit 1st and 2nd on the psych sheet. One thing to keep an eye on this morning is how veterans like Dahlia and relative newcomers like Curzan and Huske pace themselves through the heats, with another two rounds of swimming to go before qualification.

The Australian men threw down the gauntlet in the 400 free on Saturday, with five guys at 3:45 or better, while the US has a single man seeded under 3:47, Zane Grothe (3:45.78). Still, it seems like the potential is there for some big swims out of current college swimmers like Kieran Smith and Jake Magahey, both of whom went 4:06 in the 500 yard free earlier this year and already have strong long course resumes, or one of several other guys. The 2016 Olympians in this event, Conor Dwyer, and Connor Jaeger, are both retired and won’t be competing here.

Similarly, Elizabeth Beisel and Maya DiRado, who represented the USA women in the 400 IM in Ri,  are both retired, so we won’t be seeing them in the pool this morning. Madisyn Cox is the only returning finalist, and she’ll be swimming in the next-to-last heat, alongside #2 seed Emma Weyant. 2016 Olympian (though not in this event) Melanie Margalis holds the top seed, and she’ll be swimming in lane 4 of heat 6.

The men’s 100 breast seems to be wide open, despite the return of both of the 2016 qualifiers, Kevin Cordes and Cody Miller. Andrew Wilson tops the psych sheet and will swim in lane 4 of heat 7, but Michael Andrew just set the U.S. Open Record last month, and don’t be surprised if he throws down a fast time this morning in heat 6. And there’s plenty of younger guys competing who could represent the future of the USA in this event, including Reece Whitley and Josh Matheny.

The link above for Day 1 Prelims takes the viewer to Wave 1 only. This reputedly per NBC is the right link, though it keeps saying “We’re Sorry Something went wrong”:
https://stream.nbcolympics.com/swimming-us-trials-wave-2-day-1-prelims

Fink is NOT in the 400 free what heat sheets are you looking at ?

Any idea how to watch the trials in Israel?

Anyone know why Patrick Callan isn’t in the 400 free?

Does anyone know a way for people outside the US to watch??

Finke in to the 400 free/IM double by the looks of it. Machine.

Good thing the 4IM is first, because that’s probably his better chance. If he could make both events that would be legendary

I actually don’t see him on the heat sheet in the 400 free? Probably scratched