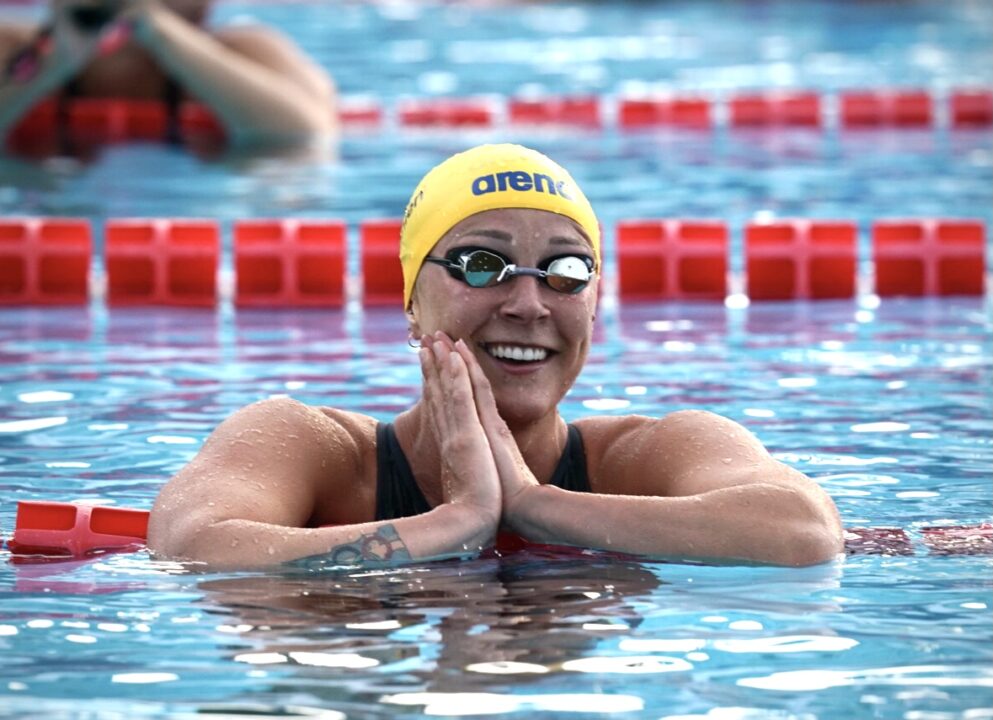 World record holder Sarah Sjostrom of Sweden is set to swim her first 100m butterfly since having undergone elbow surgery. Current photo via Mine Kasapoglu

It was a tight race in this women’s 100m fly, but on-the-mend Sarah Sjostrom of Sweden got it done for gold in a time of 57.65.

Yesterday she topped the women’s 50m fly field, but tonight represented the world record holder’s first foray back into this longer sprint since having had elbow surgery. Sjostrom has said she will only be competing in freestyle events in Tokyo, for now.

Di Liddo owns the Italian national record in 57.04 from the 2019 FINA World Championships. Only Di Liddo will race the fly in Tokyo and only on the medley relay at that.

The reigning world record holder and world champion, Kristof Milak of Hungary put on a clinic in this men’s 200m fly, beating a world-class field by over 2 seconds.

Milak punched a new championships record mark of 1:53.18 en route to beating the likes of runner-up Leonardo De Deus of Brazil. De Deus produced a time of 1:55.36 for silver to make him the 12th fastest performer in the world this season.

Italian Federico Burdisso grabbed bronze, checking in with a super solid effort of 1:55.72. The Northwestern-bound ace recently registered a new Italian national record of 1:54.28 at the European Championships to place behind Milak’s podium-topping time there in Budapest of 1:51.10.

Of note, in the earlier heats, Sajan Prakash of India became the first-ever man from his nation to notch a FINA ‘A’ cut. He hit a time of 1:56.28 to score a national record and book his ticket to Tokyo.

The host nation of Italy was shut out of the medals in this women’s 100m back, despite both Margherita Panziera and Federica Pellegrini both among the field.

It was the Dutch European champion in the 50m backstroke, Kira Toussaint, who touched first, clocking 59.23 as one of only two swimmers under the minute threshold.

Joining her was Swedish speedster Michelle Coleman who notched 59.62 as runner-up in a new personal best time. 27-year-old Coleman had never before been under the minute mark, owning a previous career-quickest time of 1:00.00 from leading off the medley relay at this year’s European Championships.

Norwegian swimmer Ingeborg Løyning hit 1:00.00 exactly to claim the bronze ahead of the aforementioned Panziera and Pellegrini. That represents a new national record. The Italians finished 4th and 5th in times of 1:00.05 and 1:00.32, respectively.

Simone Sabbioni neared the Italian national record in this 50m back sprint, touching in 24.80 to sit just .15 outside of it. Israeli Michael Laitarovsky was also under 25 seconds, claiming silver in 24.96 while Michele Lamberti cleaned up bronze in 25.08.

Taking the women’s 400m IM event was Hungary’s Iron Lady Katinka Hosszu. Hosszu stamped her name on this race in 4:36.31 to get to the wall over a second and a half ahead of Italy’s Sara Franceschi.

Hosszu took the European Championships title in Budapest last month in a mark of 4:34.76, a time which renders the multi-Olympic gold medalist 5th in the world right now.

Franceschi was near her lifetime best of 4:37.06 from this past March, while Belmonte was also under 4:40 in 4:39.37. Belmonte of Spain was due to race this event, among others, at the European Championships but pulled out to tend to injuries ahead of the Olympic Games.

32-year-old Hungarian David Verraszto destroyed this race tonight, checking in with his fastest time in over 4 years.

Verraszto reaped a monster effort of 4:09.57 to now rank as the 3rd fastest performer in the world this season heading into Tokyo.

Verraszto has a history of swimming fast at this meet, setting his personal best in this 400m IM event of 4:07.47 at the 2017 edition of the competition. He’s a two-time World Championships silver medalist, having come up just short of gold in both the 2015 and 2017 years of the biannual meet.

Most recently Verraszto finished off the podium in 4th at the European Championships, hitting a time of 4:12.15.

What a race in this women’s 100m free, where the top 5 performers all checked in under the 54-second mark. Leading the way was the seemingly ageless freestyle ace Femke Heemskerk of the Netherlands, with the multi-Olympic medalist posting a big-time 53.03.

Splitting 25.55/27.48, Heemskerk held off Sarah Sjostrom, fresh off of her 100m fly victory earlier this session. That’s a super solid double for the Swede coming off of elbow rehabilitation.

For Heemskerk, her performance here checks in as the 3rd fastest time of her illustrious career and beats the 53.05 she held as a season-best. That was the outing she registered en route to becoming European Champion in Budapest just last month.

Heemskerk’s teammate Ranomi Kromowidjojo was also looking swift, picking up the bronze in 53.55. Also in the 53-second zone were Pellegrini (53.71) and Coleman (53.93).

Boding well for the Italian men’s 400m free relay, the top 5 finishers in tonight’s individual 100m free all hail from the host country.

The field was led by Thomas Ceccon‘s new lifetime best and meet record swim of 48.14. That finished just .02 ahead of national record holder Alessandro Miressi‘s 48.16. Ceccon opened in 23.16 and closed in 24.98 to easily surpass his previous PB of 48.50 from April of this year.

Rounding out the top 3 was Santo Condorelli, the man who represented the nation of Canada at the 2016 Olympic Games. Tonight 26-year-old produced a time of 48.49, his fastest time in 2 years. That may be enough to add his name to the Italian relay lineup for Tokyo.

Another 50m breast race and another record for Benedetta Pilato, as the 16-year-old punched a new meet mark of 29.69. That held the advantage over fellow Italian Arianna Castiglioni who touched in 30.06 for silver.

Pilato took the European Championships title in a time of 29.35 after setting the Italian record at 29.30. Castiglioni’s time tonight is a new PB.

The man who notched a new Italian record in the 100m breaststroke last night doubled up on that victory with a 5om breast here. Nicolo Martinenghi punched a tie of 26.59 to get the edge over two Brazilians in Felipe Lima and Joao Gomes, Jr. Lima hit 26.92 while his teammate reached bronze medal status in 26.98.

Yesterday’s 1500m free victor Simona Quadarella snared another win, topping the 800m free in 8:23.25. That cruised to the wall over 5 seconds ahead of Martina Caramignioli while Liechtenstein swimmer Julia Hassler was 3rd in 8:30.17. That’s a new national record for Hassler as she nears the 8:30 threshold.

Nothing crazy happed in the 800m free with Brazilian Guilherme Pereira Da Costa getting it done in 7:53.97 while Norwegian record holder Henrik Christiansen was right behind in 7:54.18. One second later it was Victor Johansson‘s turn at the timepad, clinching bronze in 7:55.18.

Results site is down?

So 5mo after a broken elbow, Sjostrom’s would’ve won the 100free at US trials, wow

It was a fracture. Forensic anthropologists have found most ancient people were walking round with fractures in varying stages of healing. Italian Alps Ice Man had fractures & was still hiking arduous icy terrain but it was the arrow that stopped him .

Sarah fell over on a pavement . That she can swim very fast again is because the bone was pinned & she’s naturally good.

Interesting to know whether she notices better legs after all the leg work she was restricted to.

Johannsen 1s off of the A cut 🙁

“Pilato took the European Championships title in a time of 29.35 after setting the Italian record at 29.30. ”

We just gonna ignore that that was also a world record?

he seems quite fragile though. I think he’ll be great in Paris 2024, great talent

He needs to put some muscles on. He is still 20, so probably he has still room for growth.

He is the NR holder in short course, but only 1.59″ in LC. He is difficult to label, for a while he seemed a monster IMer, then a sprinter, then a 100 backstroker ….

Heemskerk-Sjöström-Kromo
Looks like I’m reading a result from 10 years ago. 🙂

Hey Bobo, do you know what’s up with David Aubry? He seam really poorly at Europeans.

He had a shoulder injury in January and was back in training only in April.
Here’s an interview of him after the 1500 free prelims in Budapest.
https://www.ffnatation.fr/actualites/natation/david-aubry-1536-ce-nest-pas-si-mal

And I love it.

I think Alshammer and Pellegrini were also in there …