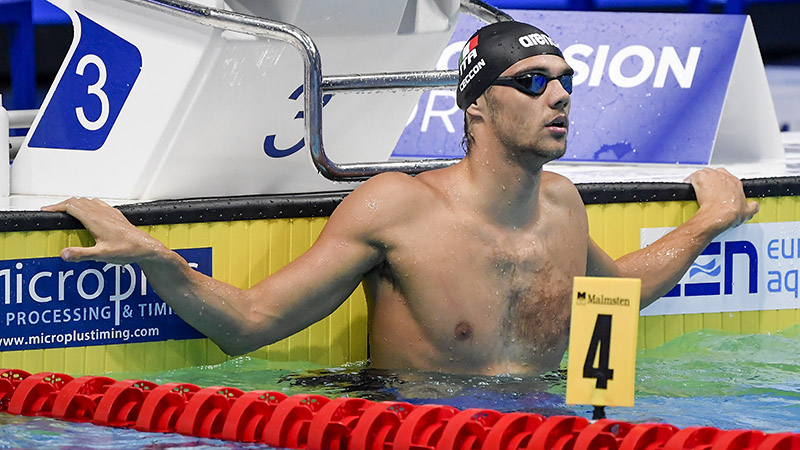 Thomas Ceccon is among the Italian athletes competing on day 1 of the Sette Colli Trophy in Rome, where he'll be joined by the Dutch, Brazilians and more. Archive photo via Andrea Staccioli / Deepbluemedia / Insidefoto

Tokyo-bound Thomas Ceccon got his hand on the wall first in the fastest timed final of the men’s 100m backstroke.

The 20-year-old multi-European Championships relay medalist punched a time of 53.79 as one of two swimmers to get under 54 seconds in the race. Behind him was the former national record holder in the event, Simone Sabbioni, who touched in 53.96, just off his 53.91 from April’s Italian Absolute Championships. Michele Lamberti rounded out the top 3 tonight in 54.14.

Ceccon owns the Italian national record in this event with the 52.84 he posted at the Italian Championships last December. He remains the sole Olympic qualifier for Italy in this event, as Sabbioni (or anyone else) needed a time of 52.8.

In this non-Olympic event of the women’s 50m backstroke, visiting Brazilian ace Etiene Medeiros got it done for gold, albeit in the slimmest of margins. The 30-year-old world champion in this event from 2017 tonight clocked a mark of 27.78 to get to the wall a hair ahead of Dutch swimmer Kira Toussaint.

Toussaint settled for silver in 27.79, over half a second outside of her national record of 27.10 produced this past April in Eindhoven. Toussaint is coming off of European Championships gold, with the Dutch maestro claiming the top spot in Budapest in a time of 27.36.

Italy’s Costanza Cocconcelli nearly broke the national mark en route to capturing bronze. The 19-year-old snagged a personal best of 27.92, just .03 outside of Silvia Scalia’s Italian standard of 27.89 from 2 years ago.

The men’s 400m free was on the subdued side, with the top time checking in at 3:47.41 by host nation swimmer Marco De Tullio.

De Tullio has already qualified for the Olympic Games in this event, finishing behind Gabriele Detti in this race at the Absolute Championships. At that meet in April, De Tullio nearly pulled off the upset, clocking 3:44.74 to Detti’s 3:44.65, with both men dipping under the Italian Swimming Federation Olympic qualification standard of 3:44.8.

A pair of Brazilian freestyles also made it onto the podium this evening, with Guilherme Pereira Da Coast claiming silver in 3:48.62 while Fernando Scheffer reached the 3rd slot in 3:49.01.

Italian Olympic icon Federica Pellegrini popped off a super solid time tonight in the 200m free, stopping the clock in a swift 1:56.23.

Splitting 56.59/59.64, Pellegrini checked in with a mark quicker than that she produced for silver at this year’s European Championships. There in Budapest, Pellegrini registered a time of 1:56.29 to fall just .02 outside of gold, won by Czech swimmer Barbora Seemanova.

Pellegrini was in a race of her own tonight, as the next closest swimmer, Anna Chiara Mascolo came into the wall well over a second later in 1:58.82.

The first national record of the meet went down courtesy of Italian ace Nicolo Martingenghi. The 21-year-old fired off the fastest time of his career in this 100m breaststroke sprint, producing a monster effort of 58.29. That edged out on-fire Dutchman Arno Kamminga, who touched in 58.40 as runner-up tonight.

Entering this meet, Martinenghi’s fastest time ever was marked by his 58.37 produced at the Absolute Italian Championships this past April. Splits for that swim included 27.28/31.09, whereas tonight Martinenghi opened in 27.67 and brought it home in 30.62 to knock off .08 and notch a new record.

For Kamminga’s part, the 24-year-old’s 58.40 is still a solid time from the man who earlier this year became just the 2nd person ever to get under 58 seconds in this event. Kamminga clocked a time of 57.90 in April.

In a thrilling women’s 100m breaststroke battle, Arianna Castiglioni produced a new lifetime best en route to reaching the top of the podium.

Crushing a time of 1:05.67, Castiglioni just beat out young gun Benedetta Pilato, who touched in 1:05.84 for a new career-best of her own. Martina Carraro made it a clean Italian sweep, capturing bronze in 1:06.08.

Castiglioni entered this meet with a season-best of 1:05.98 from this past May’s European Championships. She wound up taking silver there in Budapest in 1:06.13. Flash forward to tonight, however, and Castiglioni split 31.29/34.38 to make it happen for gold in a new Italian national record-setting time. Her effort beat out the previous NR of 1:05.86 scored by Carraro this past April.

Castiglioni now ranks 7th in the world this season.

As for Pilato, the 16-year-old phenom was 1:06.00 at April’s Championships, meaning tonight’s performance represents the teen’s first-ever outing under the 1:06 barrier. She earned a new Italian Junior Record for her effort.

Hungarian world record holder in the men’s 200m fly, Kristof Milak, made some major noise in this 100m  fly sprint. The 21-year-old busted out a time of 50.89 to lead a stacked field, owning the only sub-51 second outing of the pack.

Milak is coming off of a European Championships victory which saw the man post 50.18 in Budapest for a new meet record. That ranks him #2 behind American Caeleb Dressel who tops the entire world in 49.76 from the U.S. Olympic Swimming Trials.

NC State-commit Noe Ponti of Switzerland was within striking distance of his own national record en route to silver tonight. Ponti produced a time of 51.59, whereas his lifetime best and Swiss standard rests at 51.15.

Coming in 3rd place this evening was Santo Condorelli, who was gunning for Olympic qualification in this event. Condorelli touched in 51.62, a big-time personal best for the one-time Canadian athlete. Condorelli needed 51.0 according to the Italian Swimming Federation in order to qualify for Tokyo.

Other high-profile stars in the mix included Federico Burdisso claiming 4th in 51.78, Piero Codia hitting 51.79 for 5th and South African Chad Le Clos posting 51.87 for 6th in his first sub-52 second outing of the season.

A clash of the titans took place in this women’s 50 fly, with Swedish superstar Sarah Sjostrom pegged against Dutch speedster Ranomi Kromowidjojo. This wasn’t just any regular duel, however, as Sjostrom is making her butterfly debut since having had elbow surgery after slipping on ice earlier this year.

Sjostrom reached the wall in a narrow victory, hitting 25.42 to Kromo’s 25.43. That’s a super solid result for Sjostrom, who is sticking to freestyle for the Olympics she says. As for Kromo, she came within .19 of her own 25.24 national record logged just earlier this season.

And, just like that Sjostrom now ranks #3 in the world in this fast and furious 50m fly event.

Brazilian Olympian Bruno Fratus got the job done in this men’s 50m freestyle, registering a swim of 21.71, his fastest of the season. His time here edges out his 21.73 posted at the Pro Swim Series in April.

Touching in 15:48.81, Quadarella posted a new championships record here in Rome, knocking .03 off of what she produced at this meet in 2019.

Quadarella earned a time of 15:53.59 at this year’s European Championships, so she managed to drop over 4 seconds from that result while also moving u the world rankings to slot #4 on the season.

Apparently Le Clos asked Milak if he could join him in training and Milak said “no”. lol

Italian record and you won’t rep us in the olympics… ouch.

there will probably be a new italian record in Tokyo (Pilato)

Who are the swimmers on the bubble? I know the Israeli 4×200 Women’s relay needs to get their 4th under the B time. They went 0-2 today, wonder if the have time trials or other options?

I wish he would bring his A game more often

I mean, all of his best times entering this meet were done at the Olympics, so he knows how to rise to the occasion. He had some training interruptions the in past year because of the pandemic before he settled down with the VT pro group, and that definitely showed at the Italian nationals.

Mr Worldwide didn’t get the spot for the relay with his 100 fly??

Do we know how Santo can qualify for the Italian team? Both of his times tonight under the Olympic cut

while we’re at it why does Italy require times so damn fast to make the team???

they want each qualified swimmer to get on the podium or least make a final at the olympics, which is a bit weird because it can force them to peak before the olympics

ahah good question! As Italian, I can tell you that, aside from swimmers who actually swim the olympic cut, many athletes get qualified once qualifying competitions are over, by decision of the coaches. This created pretty weird situations in the past, especially in Rio, where the performance of these athletes was poor.
As for Santo, I definitely think he’ll go to Tokyo, I am not sure about 100 fly, but if he swims a solid 100 free at Sette Colli (as he’ll probably do considering his 100 fly and 50 free) he’ll be in for sure

In my comment above, I mentioned that I *think* he is likely to qualify based on the result of the 100 fly. He needed to dip below 51.9 to get medley relay “consideration”, and they definitely want to be able to swap swimmers out between prelims and finals.

Which two 100m breastrokers are the Italians taking for the women?

Pilato, Carraro
The most consistent and fastest Castiglioni will not go.

Castiglioni probably tapered for this meet. We’ll see who is the fastest in a month. They sure all deserved to go