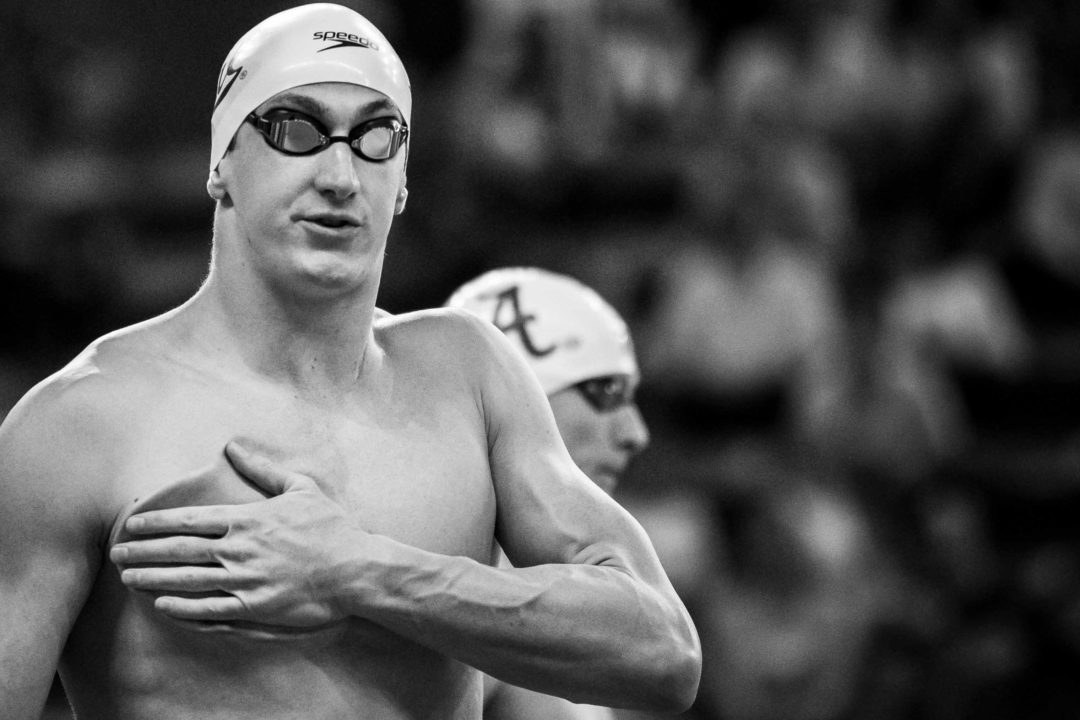 On the slate tonight will be the finals of the 200 free relay, 500 free, 200 IM, 50 free, and 400 medley relay. Cal holds the top seeds in two events. Stock photo via Jack Spitser/Spitser Photography

Thanks to Rowdy Gaines’ most recent tweet, the line-ups for the last three 200 free relays are now live. In the fourth heat, Virginia Tech will lead off with freshman Youssef Ramadan, Texas A&M will have Shaine Casas, Purdue will have Nick Sherman, and Ohio State will have Hunter Armstrong.

In the fifth heat, Alabama’s Matt King will have a second 50 free swim tonight after his false start from this morning. Meanwhile sub-19 Dillon Downing will lead off for Georgia, featuring 500 free top seed Jake Magahey and fly specialist Luca Urlando. Indiana will lead off with Tomer Frankel while NC State will lead off with Noah Henderson.

Into the final heat, Cal’s Bjorn Seelinger, Florida’s Adam Chaney, Texas’ Daniel Krueger, and Louisville’s Haridi Sameh will lead off their respective relays. Kieran Smith will also be in the water for Florida.

Georgia’s Jake Magahey and Arizona’s Brooks Fail both went sub-4:10 and under the Greensboro pool record to score the middle lanes in the 500 free. However, American record holder Kieran Smith of Florida will be on the prowl with his 4:06.32 best looming behind Magahey and Fail.

In the 200 IM, Cal freshman Destin Lasco impressed in the first prelims heat with a pool record swim of 1:40.61 to score the top seed. Texas A&M’s Shaine Casas will swim next to Lasco with his lifetime best of 1:38.95, ahead of Cal’s Hugo Gonzalez and Texas’ Carson Foster.

“Son of Matt”….. was “Progeny of California Condor” taken, rowdy?! Perhaps a mental note so he wouldn’t forget but I feel like I just got Nesty’d again at the touch… by blandness, 33 years later